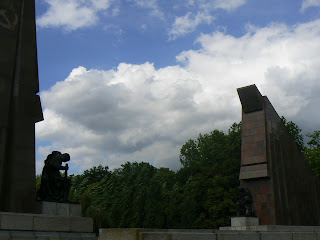 Arrived back in Dubai Aug 8 after a month holidaying in England, Wales and Berlin. I had assumed that I would be suicidal upon my return. However despite the heat, or more appropriately, the ratouba (humidity) at a level that I don’t remember last August, I am still feeling good. Bonding with friends, enjoying some home comforts, and taking in stunning scenery and wallowing in history certainly helped. My last entry mused on national identity and cultural issues here in the UAE. It’s plain that culture exists here, whether of the international consumerist kind or the discrete cultures that do not so much as melt as co-exist in a sometimes harmonious fashion. However historical legacies seem to largely be confined to traditional ruling orders relatively untroubled by contemporary innovations, and the informal shoura that ties in the key, non-sheikhly, local and incorporated families. That, and the Dubai Museum’s paltry offering constitute traditional culture within the metropolis of urban Dubai. Such historical “myths” are also recycled in Abu Dhabi, drawing on their less coastal economy traditionally speaking. This may be good or bad, but it certainly helps one appreciate Europe, even if the historical legacies I was recently taking in in Berlin for the first time in 10 years were ideological and nationalist.

Within the latter bracket came the splendid neo-Roman splendor of Soviet authoritarianism available at the USSR’s war memorial in former East Berlin (see pic below). Upon my return to Dubai this became more apt on the contemporary stage as Russia’s Near Abroad was once again rigorously policed by Russian Federation forces as it was by Soviet and Czarist ones previously. The local angle to this is more fascinating than the business section of yesterday’s Gulf News would suggest. Poti port has been largely destroyed, with large Ras al Khaimah (RAK) investments going to …eh pot as a leading RAK company had exercised strategic reach in this part of the former Soviet Union.

The latest political controversy in this particular people's republic is that all visas (with exception of clearly defined tourist ones it would appear) will incur a health insurance charge payable up front on arrival or with evidence from sponsor of it being in hand. Alongside this, Sharjah has announced (according to the phone in progamme "Nightline" on Dubai Eye, that is) that it will require copies of residential contracts for families when individuals with families try to renew their visas. For those crowded into a room or two this could be tricky, commented the Nightline programme the other night. Security tightening, national ID enforcing, or just good government business? More irreverently, readers of today's Gulf News may care to check out the discreet court room report of the claims concerning a certain major British media story in early July. The defendent breached public indecency, the paper reported the prosection lawyer as saying.
Posted by Neil Partrick at 8:30 AM

are you referring to "boozy brunette banged up for bunk up on Dubai beach" ?

yeah you saw through my plebian fascade then, you ol cnut

Thanks for sharing the post, it is very useful and informative to know recycling companies in Sharjah, complete recycling solutions making sure you would get raw materials back from wastes for remanufacturing and keep the environment safe from toxic contamination.

Thanks for your belated joining of this discussion, Lakshmi. Whilst your invitation to check out your 'ewastessharjah' website is very kind, I think your reasoning may be a little disconnected from the reality. Surely raw materials are actually being turned into waste?

Thank you very much for your valuable information.Keep sharing.
E-waste recycling mumbai