Arms and the Middle East 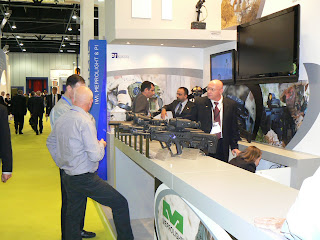 Saudi Arabian military and security officers were out in force at the biennial “defence and security equipment international” sales exhibition, DSEI, held at Excel Stadium (part of ADNEC, the Abu Dhabi exhibitions company) in London’s Docklands in mid-September. Hundreds of companies from literally around the globe were represented. It was a strange event, a bit like a cross between a rock memorabilia convention and the UN. Like the latter, it was also replete with prostitution of the overt sexual variety. A number of impossibly sexy Russian women had been shipped in to tout their wares alongside their fellow countrymen.

Saudi Arabia did not have its own exhibition area as it is not quite in the market for selling its wares. It is though in the market for big purchases. The US$100 bn extra spend announced in May by King Abdullah includes a large allocation to the interior ministry – a logical response to the Arab Spring, and this will not just be a boost to manpower. In addition the National Guard, run by Abdullah’s son Miteb, are in the midst of an extensive modernisation programme (and a stabilisation programme in Bahrain), and the Saudi defence ministry (MoDA), are apparently moving to actualise the large US contract announced two years or so ago. The Bahrainis were also in town, although much of their defence, internal and external, is effectively contracted out to the post-British successor protector state, Saudi Arabia. Saudi ambitions to develop indigenous defence industry capability seem to be largely focused on the partnership with BAE SYSTEMS, who employ 5,000 people in country and have set up a tail fin assembly facility for the EuroFighter (Typhoon) in the Kingdom. MoDA has also long run a small defence manufacturing outfit, but this is far from cutting edge.

Much optimism was in the air at DSEI as far as sales in general and specifically in the Middle East were concerned. UK defence procurement minister Gerald Howarth was lively first thing in the morning, wowing assembled UK defence journalists and British civil servants with morally uplifting talk of the virtues of the country’s defence industries. Defence secretary Liam Fox was due to speak later in the day. However two UK government ministers in one day would have been a bit much to take, so I had made my excuses before he hit the stage.

Cassidian, a Welsh company that forms part of the French-led Euro consortium, EADS, boasted, a tad ironically perhaps, of “defending world security”, and hosted on the spot briefers to talk to industry issues. BAES had a large display on one side of the stadium, including an array of armoured vehicles. Needing a breather I went dockside and witnessed Sonardyne’s “Sentinel” sonar detection technology in a simulated threat to the British warship HMS Tyne, which had berthed at DSEI alongside some fellow NATO craft. This was disappointingly dull as a large number of DSEI attendees crowded around television screens on a wind-swept poop deck. However one of Sonardyne’s PR people put impetus into proceedings when he indicated that the sonar could be used to induce vomiting or even a blow akin to being hit over the head by a baseball bat, should an intruder be foolish enough to get too close to the mammoth vessel. Then suddenly the presentation conducted by UK naval personnel in partnership with officials of British company Sonardyne was rudely interrupted by a heavily American accented robotic voice announcing that there was a “suspicious diver at 3 o’clock”.

In terms of Middle East-produced wares, Jordan had a large exhibit, mostly revolving around KADDB, a company founded in 1999 to develop indigenous defence engineering capabilities. Two of the model armoured vehicles on display, I was told by a Jordanian officer on the stand, were designed and made in-country at the 100% Jordanian staffed company. I guess that goes for the life size versions too. One of these may be “under development”, but, if wholly true, this seems an impressive and rare feat in that part of the world. Rare, that is, apart from the Israelis, who were, so to speak, out in force. Uzi and other sub machine guns were menacingly pointed at punters (see picture), while a freely distributed English language journal, Israel Defense, talked of “a return to the southern front” in light of changes in Egypt following the so-called Arab Spring.

The event was (almost) disappointingly free of protestors – they had been rerouted upriver to the House of Parliament, while the police, transport and regular, were heavy on the ground. In terms of the protestors’ concerns, some of the kit could no doubt be used to put down domestic opposition, whether in Jordan, Israel, the Gulf, or, for that matter, Europe where economic woes and criminal ambition are motivating civil disturbances. Whether that is a reason not to sell seems a moot point. Much of the kit could also be used to undermine another country’s national sovereignty, whether blessed by the UN or not, but that does not seems to be mobilising the anti arms trade people so much these days.
Posted by Neil Partrick at 3:08 PM

I didn't think i cared about this shit anymore but this is all rather depressing. What would you recommend for blowing your own head off??

I think the Israeli "Jericho" pistol would do the job nicely and rather stylishly. Thanks for your comment Ms "Nature", I wonder how many divisions you have...

While it is good to give an insight into this sordid situation its worth while to publicise this site http://www.caat.org.uk/