Peter Case is a totally new discovery to me, as was the venue at which he played last night, the Birkbeck Tavern in Leyton, East London. This American, now self-styled “folk rock” artist, sang solo for about 45 minutes – every number was a corker, and some were quite brilliant. Due to the unfamiliarity of the songs, I cannot relay to you the titles, save the Beatles number, which given Case's lo-fi orientation was fairly obscure even to the English punters – “Not a Second Time”, from their second album.

One number that especially stood out was when Peter deployed Biblical-style lyrical referencing before breaking half-way for a snatch of Thelonious Monk. This is was a man armed only with an acoustic guitar; oh, and an extraordinarily good voice. His set was nothing less than compelling.

I have to confess something here. If anyone present last night is reading this, I was the goon who shouted out “What about the Blondie song?” when Mr Case asked, in a deadpan, droll delivery that made his between numbers chat highly entertaining, “Any questions?”. He never really intended to play “Hanging on the Telephone,” and I don’t blame him. He has done a whole lot more since those days. Yet I was there because the blurb from What’s Cookin’ (the cover-all name for the music nights at the Birkbeck) had mentioned that an early band of his, The Nerves, had first written and performed it back in 1976. I had always thought it was Chris Stein and Debbie Harry.

Peter Case apparently had a formidable career with power pop and proto-punk outfits, The Nerves and The Plimsouls. Great names and no doubt great bands. Since the 1980s he has obviously reinvented himself - as a skilled finger-picking folk and country player, and, from time to time, a blues man. It seems he can range pretty widely. Seeing him play for free in a Leyton pub, when I have since discovered he has umpteen albums under his belt, including for majors like Geffen, was quite a privilege.

His website reveals that this is a guy who has no time for BS and his musical favourites reflect that. I sometimes was reminded of Loudon Wainwright III, although I doubt he relates to him. Peter can storytell, but he can also play like a motherfuck. Introducing a blues number that Memphis Minnie had sung, he told us of the driver of a then 90 year old blues legend, Honey Boy Edwards. Case met the driver, a mere 70 year old, on the trail somewhere when he was still driving for Honey Boy, and he apparently had also known (driven for?) fellow Clarkesdale performer, Robert Johnson. There was a strong sense of musical legacy here, although Mr Case is a mere 54 year old. 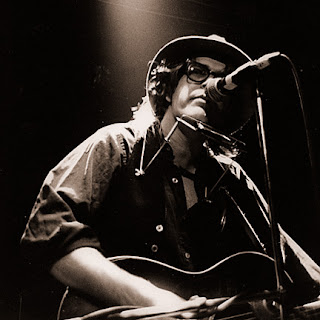 Toward the end of his set a collection went round (I owe you Peter). This was for all three acts on the bill. It struck me that this form of payment, and the venue itself, was a much better way to do a “roots night” than Walthamstow’s would-be premier music venue, Ye Olde Rose and Crown (see Folk Night/Stow Festival review below). The Birkbeck seems like the real deal, the punters were packed in but not too tightly, beer glasses in hand, and the music was cool. Let’s hope the yummie mummies and daddies at the upstairs theatre at Ye Olde Rose and Crown don’t get wind of this.

Peter finished off by dueting with Michael Weston King. I only caught the last three numbers of Michael’s set so I can’t give a proper assessment (I entirely missed the first singer, local boy Benjamin Folke Thomas). Formerly with The Good Sons, a 1990s alt-country band, Mr Weston King too has a fine voice and also accompanies himself on acoustic. There is definitely an air of the Texan singer Townes Van Zandt about him (Van Zandt even covered one of his sons, “Riding the Range”). He should be American but his between songs patter sure made him sound like an Anglo (as did his plugging of a benefit CD on which he sings the title track We're All in it Together, for the financially troubled Morning Star newspaper). He and Case finished the night in a suitably rousing fashion to send us on our way.

These events need supporting, not least as the pub itself is threatened with closure. If you're in London get over there, especially on Wednesday evenings and alternate Saturday and Sundays when much of the roots material is aired.
Posted by Neil Partrick at 8:04 PM

Oh, I guess you never got the Plimsouls over there.

Thanks for your comment Biggles. Will check out your link. Please "follow me", I only have 5 followers at present and one of them is me!