Poetry, politics and song with Ragged Trousers and Hastings Friends


The Ragged Trousered Cabaret (RTC) and Hastings Friendship Group (HFG) came together for a gig at the welcoming Owl and Pussycat Lounge on Sunday to raise funds for HFG and to reflect on contemporary popular struggle.

RTC has a long history of cultural and political engagement, inspired by the famous book by the one time Hastings-based writer Robert Tressell and by the anti-trade union mood of the 1980s. Members of the print union Sogat originally formed the cabaret group in 1984 in Sutton, and subsequently famous names like Mike Myers and Harry Enfield trod its boards. In this collectivist spirit Ann Field began the evening with a long, and somewhat stern and pedagogic, talk about trade union struggle. Ann was mindful of the possible new beginning the day before with the election of Jeremy Corbyn as Labour leader, and spoke of the latest Conservative legislative proposal to “reform” the unions. Ann though was much more preoccupied with her scheduled talk on the Wapping print dispute. It was fascinating to be reminded of the context and detail of that mid-1980s conflict. However, as there were few in the room not old enough, nor I suspect not engaged enough, to remember it well, Ann was preaching to the converted. Still, it was all in a good cause: for HFG and for remembering an emblematic setback for organised labour.

A poem by poet Tom O’Brien continuing the same broad theme was read out by Warren Davis. Not for children or the faint-hearted, it was sweary and simplistic and went down very well. 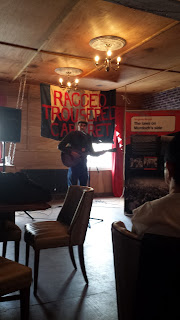 Songs mostly in the spirit of workers' struggle were performed by HFG regular Tom Cole. He sang great interpretations of numbers by Woody Guthrie ("Ain’t Got No Home In This World" and "Pretty Boy Floyd"), Ewan McColl ("My Old Man") and Billy Bragg ("Between The Wars"). I am more familiar with Ian Dury’s “My Old Man”, an altogether less maudlin and less precious take on his working class father. “Between The Wars”, inevitably perhaps, did the business for an audience in no doubt as to where its allegiances, political and cultural, lay.

Tony Peak followed. He has a poetic slant on struggle too. The inspired “Bottle Alley” tells of poverty and misery in a renowned Hastings street. Tony disparagingly referred to his own daily writing of sonnets, but chose to perform some in song. His ode to the late local Labour leader Jeremy Birch, was equal parts Sixth Form and Shakespearian.

Pete Donohue, literary editor at Hastings Independent Press, is a lively performance poet. He poured through loose sheaves of paper, sometimes performing one before literally discarding another. Pete brought to life many of the street characters familiar to those who live in the area. He is also not afraid to “do dark” either, whether the audience could cope or not.

Paul Crimin, a HFG stalwart, largely avoided the theme of the day. In fact, singing “I Don’t Want To Talk About It”, a song originally performed by Crazy Horse but made famous by Rod Stewart, was a surreal counterpart to the worker-orientation. However it’s a wonderful number. Paul introduced the equally powerful Tears for Fears’ song “It’s A Mad World” as reflecting how he felt after Corbyn's election i.e. the (welcome)“Alice in Wonderland”  mood that Tony Peak referred to earlier. Given the choice, many present and outside the room would probably prefer the possibly bumpy ride of a Jeremy Corbyn prime ministership to yet more wars of intervention under either a Tory or a Neo-Blairite administration.

"Song for Jeremy" was the second number performed in memory of the new Labour leader's namesake: the late, great Jeremy Birch. It was sung at his memorial service and many joined in on this occasion too (see picture below). 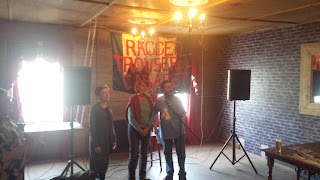 Sue Johns was for me the highlight of the night. An avowed Cornish speaker, feminist, shop girl, and, most importantly, a brilliant declaimer of her own verse. Sue’s poems alternated between the exquisite and the very funny. I wondered why she isn’t much better known, but that is probably just my ignorance. She appears to have had many works published after all, and has been in a number of anthologies, including one, “The Poems of Labour”, which contains, she noted, an introduction by Roy Hattersley, that cultural doyen and former Labour deputy leader.

JC is arguably a return to the days when cultured people were at, or near, the top of the party, as opposed to the Blairite acolytes who engineered the tacky and downright dangerous takeover of our high streets by bookies and pay day lenders. A cultural reassertion would be no bad thing among those who wish to better the lot of labour rather than serve it up patronising estuary English and a professed love of pop and football.

Sue works in a department store in the Kings Road Chelsea, a job that once, she said, saw her narrowly avoid an encounter with Lady Thatcher. The final line of the poem, “Shop Girl”, references her employer and her status, “Shop girl: never knowingly understood.” Another poem told of her desire to go down on Kirsty Wark whenever she sees her on Newsnight, whatever death, destruction and misery she is talking about. Sue’s final poem on the night, "Before The Pussy Riots", quoted the Quran, the Hindu text the Manusmriti, and Tennyson’s 'Charge of the Light Brigade' in a highly emotional account of honour, marriage and violence. 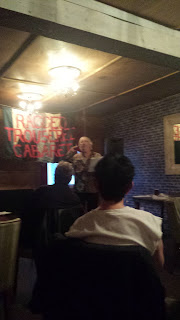 Patric Cunnane of RTC lightened the mood somewhat with his often hilarious poetic observations. One concerned a Cuban man employed by the state to put granny specs on the life-size John Lennon statue in Havana whenever tourists want to pose next to it. He then takes them off the statue in case they get stolen.

The night finished, I am told, with a rousing musical performance by Rob Johnson. Following the sound of my stomach sadly meant that I had left before Rob started performing. Next time I’ll bring sandwiches to HFG’s sometimes quite long shows.

Once again... A big Thank You to Deira and the Diary. Nigel Sinden

As ever an interesting review of what appears to be a left wing evening of song and poem - or should that be philosophies? Would have liked to have been there because although not a fan of poetry it can sometimes cut harsher than a knife and from your description the performed works did just that.

Many thanks to Pete and Nigel for their kind comments. I like the knife analogy Pete! Best wishes Neil