Buckets of love from buckets of blood

Doug MacLeod is a preacher, a self-help therapist. He treats depression with CBT. Specifically his chosen behavioural remedy is the Blues. Not wallowing in it, but singing about it and hopefully therefore finding a way through it. Doug was abused as a young man. The Blues was his redemption it seems. He isn’t saying it’s easy, but when he sings he finds a way to lift himself beyond his problems and, between songs, advises his listeners as to how they might do the same, other than by the therapy of listening to him that is.

A mature white American originally from St Louis, Doug has been living in Baton Rouge for many years. He has had at least a couple of his songs covered by some bigger names in the blues field and been regularly honoured himself, yet he remains fairly obscure beyond his musical fraternity. Accompanying himself on a Resonator acoustic guitar, he sings with conviction. 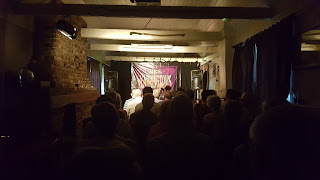 One award winning number, the “Entitled Ones”, told the story of those who feel deserving of a better life than the rest of us, a song spawned by his own disillusion with an able-bodied friend who bought himself a blue disabled badge because he was too lazy to find a less convenient parking spot.

A less “correct” message was “Home Cooking” whose essential idea is that a man well-fed at home doesn’t go sniffing around for dinner elsewhere. Doug introduced it by admitting that this attitude doesn’t necessarily make for a good relationship but it sure as hell works as a blues song. He’s right.

My particular favourite on the night was “Long Black Train”. He introduced it with a carefully worded homily about our relatively brief duration on this earth. When the ticket collector tells you this is your stop, he warned, it’s no good saying, “Well, I’d like to ride on a little longer.” So before you get to the end of the line, make sure your journey was worthwhile. The song itself was big on atmosphere, subtly working its charm on you. Like many songs he performed on the night I am sure his material repays more listening, which I intend to do via his latest CD, “Live in Europe”.

“The Devil’s Road” was one of several that gave a hint of the trouble he’s known. It told the story of a woman seeking redemption whose search for guidance from a priest takes on a dark turn. It was unclear in his musical telling of this story which of the two people the devil was supposed to be influencing, or whether desperation and unpredictability can take any of us into unwanted places. God and the Devil are always pretty close at hand in the blues world, a close cousin of Gospel in any case.

It would be something to see him play this song in some of the “Buckets of Blood” that, as he explained, the hard-core, down-home blues joints are known as in the US. Mrs Yarrington’s Music Club, held monthly at the back of the Senlac Inn in Battle, is no bucket of blood, but, appropriately perhaps, the pub room has doubled as a temporary Methodist Meeting House, and the evening we were there was almost as hot and humid as a Mississippi summer night.


Toward the end of the gig, Doug told us that we may have a hole in our bucket that our experiences growing up have given us, but despite this those who care about us do their best to keep our buckets filled with love. Remember this, he said. Amen to that.
Posted by Neil Partrick at 9:44 PM

It was a great gig and amazing to see a performer like Doug Macleod in such an intimate venue like the Senlac. More please! :)

I haven't heard of Doug Macleod but his take on the blues sounds interesting. The blues, or more importantly the Country Blues, were freeform social commentaries on the life and times of poor blacks in the deep south, before they moved to the cities and the discipline of combo/ensemble playing. From what you say Doug's music picks up on some of the sorrows and mental depression and a sense of hopelessness which most people experience at some point in their lives, just as it did for the American Negro in the early 20th century. I will watch out for this singer/songwriter to see for myself how the modern take on the blues and self help conjoins.
Good review Neil.

Many thanks to NSB and Pete Sadler for these comments. You're very right (as usual) Pete. It is important to emphasise the individual voice, reflections and fears at work in the country/folk blues scene and its greater religiosity or compact with the Devil (or both) than we would normally associate with Chicago electric R n B for example. I probably should have made that differentiation, Doug being in the solo, acoustic blues tradition. But thanks for getting this across Pete and for taking the time to do so.