Bury Bus Station and beyond

I arrived at Manchester Victoria station from the sleepier denizens of Whittle-le-Woods near Chorley. Specifically I’d departed for the big city from a bizarre new creation called Buckshaw Village. Village it is not. A large new housing development built around a new railway station and superstore it is.

Arriving in the heart of the great northern city of Manchester, capital of the cotton trade etc., I was immediately struck by the number of (young) people on the street and the apparent normality of life amidst a global pandemic. The Cathedral beckoned and I figured it might offer safe refuge. Social distancing wouldn’t need to be rigorously enforced in the House of the Lord. I was right about the limited punters, but security was relatively tight. I was taken by the beauty of the stained glass windows, the agnostic humanity of the 'Artist's Statement' by P. Wharton, who made the appropriately-named 'Hope's Last Call' sculpture (below), and a depiction of Christ (see also below). Public displays of Christian iconography can be counted in their millions, but this unique painting, modestly appended to a pillar, moved me in its simplicity and modern reinventions. 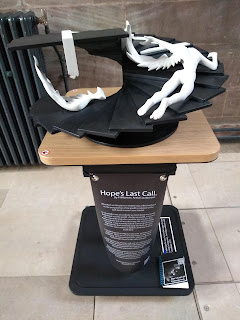 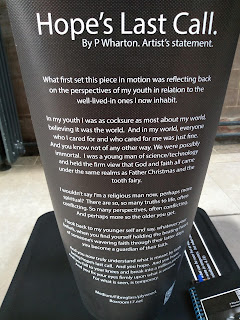 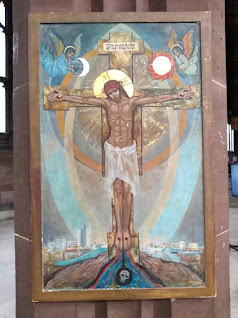 I was soon thrown back again into the serried ranks of the fully legal, open air drinking frenzy that the centre of this city seems dedicated to. Unpleasant at the best of times, it seemed downright dangerous now. I decided to get out of town fast, not least as I’d earlier invested nearly a Fiver in a ‘PlusBus’ pass.

I travelled from the centre of Manchester’s last chance saloon boozing orgy to the Bury Interchange via the Number 138. Taking about an hour each way, this was a voyage of discovery, ‘a sociologist’s paradise’ as John Cooper Clarke wrote of Beasley Street in Salford. We journeyed through the outskirts of Manchester, taking in a very different cultural scene to that I’d departed from around Manchester Victoria Station. Traditionally dressed older men of Pakistani heritage, and young Anglo-Pakistani women dressed in variations of hijab. A particularly vocal set of such girls had, from the start been on the top deck of the bus from Manchester city centre, engaging in a war of increasingly loud, hostile and very crude words with boys of, from what I could work out, the same heritage who were positioned at the back of the top deck. The boys kept loudly labelling them ‘racist bitches’, a moniker they rammed home on their eventual departure, thank God, somewhere just before Prestwich. Perhaps the girls were viewed by these boys as being down on their own (and their) culture, or I, as a total outsider, was missing differences of heritage or simply taking their language too literally. As the bus went through Prestwich my drive-by cultural history tour changed from being overwhelmingly Pakistani Muslim and, outwardly at least, ‘observant’, to Jewish, and often Orthodox at that, although this was a Saturday afternoon. The shops looked as modest as the array of Pakistani grocers and barbers I’d seen in Cheetham Hill. Many of course were closed as Shabbat fast approached.

In Bury itself the bus pulled into the impressive ‘Interchange’, a large and very organised bus stop. I felt foreign, not because of religious or cultural traditions different to my own, but because Bury seemed, despite appearances, homogenously northern and working class. Among its many traditionally dressed Asians out shopping, and often unhealthy looking older white men spilling out of a nearby pub, I put my mask away and sat in the main pedestrianised shopping area near the bus station. With my home-made cheese sandwiches I felt more like Alan Bennett than somehow blending in with the other middle-aged white people occupying the public benches. While my thermos flask might have been something Bennett’s parents would have deployed waiting for the homeward bus from Leeds town centre, it was a pretty rare specimen round here. I was tempted by a Wetherspoon’s pub (‘The Robert Peel’), but was fearful of the post-drinking comedown more than the lack of social distancing. Passing a gaudy sports bar, I sought refuge in the nearby Bury Art Museum (and ‘Sculpture Centre’) (BAM). It was every inch an architectural tribute to late Victorian municipal splendour from the outside, and was not really that much different in terms of its content. Upon entry, greeted in a very friendly manner and managed sensibly in terms of logging in my personal details and maintaining distancing etc., I was struck by a confusing array of abstract sculptural images that seemed, in part at least, to to be the product of schools’ art projects. Certainly there were several references and indeed work spaces throughout BAM intended to motivate children to take up or at least be interested in art. They all felt like add-ons though in a desperate bid to suggest that what remains irrevocably, in spirt as well as in name, a museum, is somehow relevant. A tribute to a comedian, local girl Victoria Wood, did little to assuage this impression. In much of BAM, in its tall gallery rooms (see photo below) and up its generous stone staircase, the heart of what still defines it adorned the walls: paeans to the old ruling class, fat generals sat astride struggling old nags, local burghers typical of those whose spare cash helped start the Museum itself, and especially educative time pieces such as ‘The Slave Girl of Cairo Market’, a depiction, bizarrely, of a pretty white girl in what I suppose was an example of orientalist prejudice/propaganda. A huge and perfectly executed oil painting of a slain deer being mourned by, or still breastfeeding, its offspring, was either an unexpected condemnation of bourgeois slaughter sports of the animal variety, or just a soulless caricature of ‘natural’ exploits. 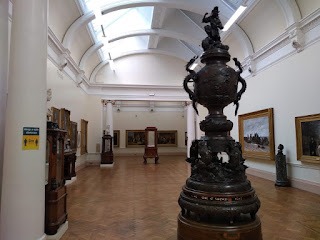 BAM is a strange place. Still very much a tribute to Victorian class-ridden philanthropy whose literal legacies probably help to keep it running, with would-be kiddy-friendly and ultra-modern sculpture spaces added on without seemingly much thought. Perhaps any really promising local artists would get the hell out of Bury as soon they’ve graduated from university, but thinking of that large space occupied by just one artist, a conceptual sculptor, I wondered about all the local and totally amateur work that could be displayed there. A floor full of the best work of a local art college’s students might get some punters in from the nearby pubs, some of whom would probably be related to the artists on display, a very unlikely proposition at present. If such open access happens regularly at BAM then forgive me, but my brief experience – I had bowled up just 20 minutes before closing time – suggests a place different to that being bizarrely re-imagined on the BAM website and equally disconnected.

Interestingly, as I exited BAM I spied more contemporary art but of a very public kind. Positioned above Bury Interchange itself, "From Northern Soul (Bury Neon)", by Ron Sliman (see below), spelt out the forced punning of ‘Poetry has been Bury, Bury good to me.’ It was though an interesting antidote to the public art that first greets you as the Manchester bus pulls into Bury: a sculpture of a senior officer from the Lancs Fusiliers marks the 1905 South African Boer War (by George Frampton; see below). I’d be surprised if there was as much pressure from Bury locals to pull that down as there is from some Manchester and other folk regarding the sculpture of Sir Robert Peel in Manchester Piccadilly. 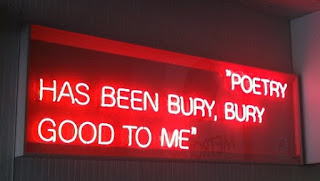 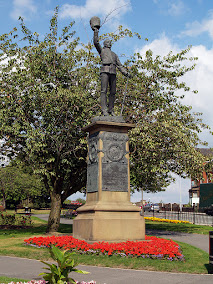 (Photo above by David Ingham from Bury)
On the bus back from Bury to Manchester, I was, like earlier, for what this observation’s worth, the only other white male present for most of the one hour journey, apart that is from the very obliging driver. Economic demographics play a role in urban bus usage, hence why there were plenty of elderly white women using their free bus passes. Being a ‘bus wanker’ is though for some an expression of personal economic failure once cited, albeit not quite in those terms, by Margaret Thatcher.
As we approached the city a man got on who bore more than a passing resemblance to Robert Wyatt. Of course I was under no flashback-driven delusion that this was in fact the former drummer with Soft Machine who'd gone on to make 'Shipbuilding' famous. For one thing the socio-demographic factors in the area didn’t compute, despite the rock star’s professed commitment to public services, including those of the omnibus kind. The most obvious preclusion of this possibility though was the fact that he self-evidently wasn’t in a wheelchair. The uncanny thing though was that he got on somewhere past Cheetham Hill with what looked like a couple of walking implements, one of which he laid out in the heavy luggage section at the front of the bus. The other is that Wyatt has just turned 75; this chap looked 20 years younger, perhaps more, as part of his aged appearance was due to the fact that he was a bit dishevelled and plainly not that healthy. Life hadn’t been kind to him, it seemed. The first thing that struck me, aside from his long grey hair and long grey beard, when he walked on to the bus was that he was armed with a large black note book. Whilst I was musing on the idea of him being Robert Wyatt, I noticed after he sat down a few rows in front of me that he was actually keenly reading what was hidden inside the note book: a section of what looked like a guide to rock music written at least three decades ago with parts marked in highlighter pen. Perhaps he was reading about himself?
Back in Manchester I wandered around the back streets close to Piccadilly and Victoria stations and found myself spying the original Co-Operative Wholesale Society building (right). 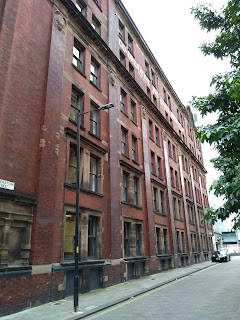 Just around the corner from this, and facing Manchester Victoria station, was the HQ of the Co-op Bank. A large display in its window gave expression to the halcyon days of the Co-Op Movement, topped off by the bronze statue outside of Robert Owen. With a needy child at his feet, 'The Father of Co-operation' stood as a, presumably unthreatened, monument to a Victorian philanthropist and to a different, if not idealistic, time. As the Co-Op Bank's window testament implies, Owen can be claimed for the Labour Movement's traditional focus on wage protection and ending destitution. So far so safe. However his statue, and the accompanying Bank tribute, is also testament to his desire to build a new 'model society' as he sought to do in the New Lanark mill village in Scotland. The Co-Op seems keen to draw on some of that legacy to offset the poor PR of its late capitalist cynicism. A late middle-aged woman weighed down with life and luggage, propped herself against Mr Owen. A great image perhaps, but it prevented me from taking a photo of my own. 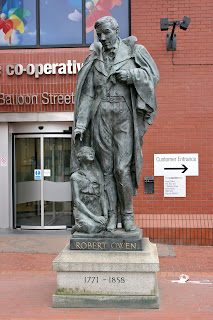 (Photo above by Mike Peel)

Heading back by train to the new model society that is Buckshaw Village, the rudimentary socialism of a free public toilet in Manchester Victoria station was appreciated. However it was not socially safe inside. 'We're not even practising social distancing for our knobs,' a local wag drolly observed.
I headed out of Manchester, passing through the intense architecture around Salford Central, clocking the bizarrely named 'New Bailey' amongst the varieties of old and new brutalism on display. Changing at Bolton the 'heritage' industry was seemingly making a virtue of social apartheid. Edwardian frosted  windows on the station platform included such legends as 'Gentlemen's First Class Waiting Room', juxtaposed with the rather less exclusive 'General Waiting Room', or, further along, the 'Ladies' First and Second Class Waiting Rooms.' In the real world of the present day we usually share the same facilities but social and cultural hierarchies seem as rigid as ever, in Bury and beyond.
Posted by Neil Partrick at 5:20 PM