Interring the state with the bones of its leader’s husband

I don't believe in disrespecting any public figures at the moment of their death. However I was appalled that Prince Philip, who held no constitutional status or constitutional role in the UK, was so absurdly and endlessly lauded on UK media. I have recently been reminded that very well-established protocols cover the state media's handling of such events, and no doubt it would, by established convention, have been required that there be a uniform and (for viewers at least) black-tied announcement across all BBC TV and radio platforms. In addition, the supposedly 'no fuss' duke may have been a party to some of the more recent media pre-planning. However it still came across as beyond excessive in an era of proliferating media platforms and a supposed lack of deference. This felt like the death of George VI redux, minus that monarch's constitutional status.
For example, all BBC domestic radio platforms - including Radio 1 and BBC6 Music - were for three hours carrying an identical diet of semi-deification of a man who was no more no less than a hardworking consort of the head of state. He was a war hero and launched an impressive public service scheme. However Middle Eastern dictatorships, many of with which I'm familiar, would do a lot less in propagandist wall to wall coverage - in part admittedly because of modesty over what would be, by definition, a female 'consort'. Why though is the state media of our great British democracy engaging in serial broadcast hagiography of a figure who, by definition, represented no one - and, constitutionally speaking, did not even represent or deputise for the Queen. 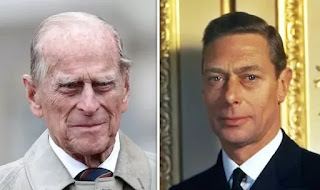 Part of the answer is the BBC's irresponsibility and institutional cowardice. This publicly-subsidised state broadcaster has a greater operational and political distance from the UK government than officially independent media in most Middle Eastern states or in, say, Russia or China. However state patronage wielded via a regressive flat tax (AKA 'the TV license'), that these days only the old-fashioned who watch terrestrial TV on quaint TV sets actually pay, has been under political threat from the Right ever since the 1980s. The BBC's coverage of Philip's death has exceeded the wildest dreams of even the most zealous monarchists (the PR sop of an online complaints page was soon snuffed out). The state broadcaster has sought to give itself domestic political cover at a time when an opaque hereditary institution that determines our head of state is deemed crucial to the establishment's rear-guard action to save the Kingdom. Intra-Windsor fighting has though long weakened the royals' ability to embody our imagined Union. And an out of touch terrestrial media won't breathe life into that old firm, any more than it can ol' Phil, by behaving as if its role is to serve the rulers of the state rather than to educate as well as entertain HM's subjects. Meanwhile the mullahs heading our state religious cabal were widely deployed across the BBC in an anachronistic and sacrilegious application of unction on a departed member of the royal institution that invented the Church of England. Incredibly, nearly a century after its last serious political opponent left No 10, Anglicanism still plays its dutiful part in a UK national project rooted in the holy trinity of Royalty, Church and State.
The crass, belated, neo-nationalist pincer movement of the last few days may come to seem like a last hurrah for a Union about to collapse into far less than the sum of its non-consensually joined parts. The castration of the UK's international influence is the irreversible result of a prolonged period of strategic self-abuse. This first began, unwittingly, with Blair's politically unnecessary introduction of devolution, and was then deepened by both of the UK's leading unionist parties being unable to hold Scotland in the 200 year old monarchial bloc. Those unionists constituted in what the BBC these days absurdly refers to as the 'nation' of Northern Ireland were probably inevitably set to lose the numbers game, and, dangerously, in the process lose control of their angry and economically struggling community, in favour of Irish reunification. 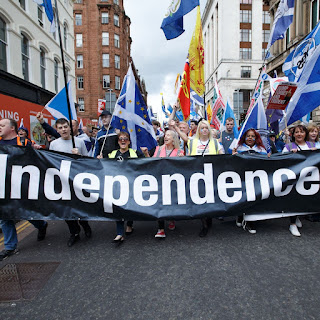 Copyright The Daily Record
The grotesque UK ruling class folly of unthinkingly ramming through Scottish and Welsh self-rule was though avoidable. Its ineptness was revealed in Cameron granting, via the monarch, a Scottish independence referendum that he had no political clue how to win, and seemingly little real political concern about either way. The close-run survival of the state after that particular indigenous challenge could not withstand a further Cameron role in the inevitable destruction of the Union. Our international relevance, long a key part of the contemporary construct that is the UK, was then decimated thanks to Cameron providing an unnecessary and highly irresponsible referendum on Brexit, followed by Johnson's grossly inept, spatchcock, delivery of it.
After the widely admired Elizabeth II will shortly come Charles III or perhaps an in-house monarchial putsch in favour of William V. More relevantly, the rulers of a rump England, with maybe the Welsh principality for company, will need for the first time in the sceptred isle's history to admit to 'their' people that the future can no longer be anything like the imagined past.
Who rules, and how, can never be reduced to a binary referendum question. However there is a desperate need for some very complex questions to be asked and for their resolution to be widely debated. Post-Covid, this must, of necessity, mean mass and tactile engagement, not the bougeois liberal stage-managed 'debate' in so-called Citizens' Assemblies. The supposed 'citizens' need to wake up to the inherently pre-democratic way in which they, as monarchial subjects, are governed, and to the fact that their supposed sovereignty is in fact loaned to political administrators wielding pre-democratic monarchial powers rather than actively exercised by the 'citizenry'. This by no means necessitates embracing a solely Left-inclined agenda, or even necessarily becoming a republic. It does require awareness of how we are governed and how little authority we, the people, have (in or out of the EU). Otherwise the political mire of division and petty nationalism will continue in an England overseen by an almost natural Tory 'majority'. The propaganda machinations of the Windsors, the Anglican Church and the BBC, conjoined with a Covid era nationalist add-on tritely called 'our NHS', won't save an England that has never been able or even interested in defining itself distinctly from the UK.
(This is an expanded and updated version of what I wrote on Facebook on the day that the death of HRH Prince Philip was announced)
Posted by Neil Partrick at 1:40 PM

The BBC is running scared of the Government hence this sycophantic wall to wall coverage of the D of E's death.I gave up signing "save the BBC" petitions ages ago as it no longer has even the pretence of being an authoritative and neutral voice of the nation.
As a citizen of the Republic of Ireland I can distance myself mentally from the small minded nationalistic backwater the UK has become and can't wait for the break up of the union and a united Ireland.

I don't believe in disrespecting any public figures at the moment of their death but I will go for their lifeless jugular 3 days later...great read. The coverage was rather excessive and wildly out of step with the viewing public. The token of a complaint firm was just so they can feed all of them into a shredder. It won't change any future programming regarding HRH The Prince Philip...sadly. If you think this was excessive wait till Queenie goes...

I thought much the same - absolute drivel & the BBC is terrible in succumbing to this influence. Remember Diana. lval

Great piece, clear, forthright and coherent. It's a shame one has to look beyond mainstream media for insights of this calibre, but it is as it is.
Not having had a TV for twenty years I was blissfully unaware of the sycophantic drivel being parcelled out by the BBC on its TV channels, though I got a taste of it via radios 3 and 4. It would seem that Il Duce was largely subject to universal indifference while alive but has somehow become 'much loved' since his death. As you say Neil, much sway is still held over our lives by the unholy trinity of Church, State and Royalty. My hope is that a generation of younger people for whom such an alliance is largely an irrelevance - and who regard terrestrial TV has an anachronism - will, if they become sufficiently politicised, consign such influence to the margins, where it now and for the future rightly belongs. I suspect that largely depends on to which gallery William V ultimately plays. On that score, sadly, I won't be holding my breath.

Great stuff - Reminds me of the (perjorative) phrase "the diana-fication of the NHS" which a friend observed was neo- or pseudo- propaganda also being promulgated by the BBC during covid at the obvious behest of No10. And ffs don't start me on Captain Tom...

Many thanks for all of the above comments. Many interesting and amusing observations. Among the interesting responses I noted that of 'Unknown', the second response above. I'd love to know if I already know u. Feel free to message me on neilpartrick@hotmail.com if u feel like it. Careful with that surname spelling though! I'd also like to express a particular appreciation to Keith R for his appreciation of me; much mutual mastication going on here...