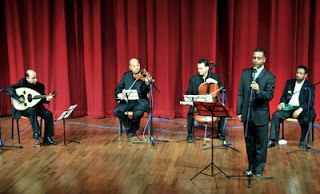 Have been laying low , focusing on a new work situation outside of Dubai but have occasionally been surfacing in order to catch "ethnic" concerts in the more conservative emirate down the road, Sharjah. Ramadhan has not prevented the party mood taking off after iftar, even if attendance is sparse. A (relatively) classical Arab music ensemble, the Tigris Ensemble no less, performing last week at AUS featured, I think, an Iraqi oud player, and, I guess, a Lebanese violin and viola player respectively, and an Egyptian tamborine player. (This was no Liam Gallagher (barely) trying for effect; the man played it with his right hand as if it were a tabla.) Sadly the Arabic and English leaflet that was barely noticeable upon arrival, told us everything except the names and nationalities of the performers. This was said at great, mumbled, speed at the beginning of the gig by one of the musicians. My Arabic is not excellent, so I scrambled to take it in, but there should have been a bit more fanfare, in any language.

As was (almost) said of Frank Zappa, I wished the other guys had shut up and let the guy play his oud. However when he was given free rein the subtleties were lost on much of the audience. Sadly the event was a social more than an artistic occasion, a cause for (loudly) affirming cultural identity bolstered by post-iftar caffeine overload, rather than allowing a sufi-like serenity to take over (G-d forbid). When an elegantly dressed Iraqi (?) singer rather modestly took the spotlight, it did raise the tempo several degrees, however. He had an impressive range and a definite presence.
Posted by Neil Partrick at 2:39 PM