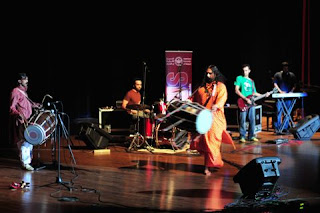 Pakistani fusion band OverLoad came to the American University of Sharjah last week, and desperately tried to enliven a half empty hall consisting of kids who would clap jello sliding down a wall, and ageing teaching staff. Not that they weren't good, beginning with a four piece of female vox, synth player, electric guitarist and drummer, their own-brand rock and electronica was interesting, even accomplished in places. The singer sounded confident, despite this being her debut appearance apparently. She sung in English and Urdu, with the latter seeing an accompanying musical shift of gears from the guys behind her. Much of their obscurer stylisations were lost on the non-paying students hyped up for a 5pm gig (!) however. Most it seems were there for the hairy sufi drummers who we were told were playing complex Indian rhythyms on their two large drums which they periodically swirled around in tame dervish stylee. Frankly, 10 minutes after their entry I was tired of the overload of drumming pyrotechnics and wanted the cool female vocalist to return to the stage. So it seems did a few of the testosterone fuelled students whose wolf whistles had earlier encouraged her to cover up when she was reduced to being stage hand for the rest of the band. Dump the drummers, change the name, and turn up the volume guys.
Posted by Neil Partrick at 6:13 AM

these hairy drummers play six hours every thursday night in a shrine in Lahore and people stay interested.Its probably because drum beats are such a big part of the punjabi culture.I myself heard them frew years back playing in band and it didnt seem very impressive.check out overload's videos on you tube and you might have a better idea of why they are so hot in their native pakistan.