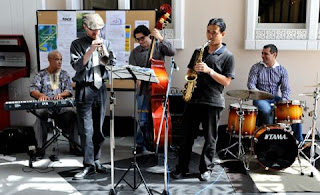 Dwight Dickerson, African American musical virtuoso and American University of Sharjah (AUS) lecturer, showcased his jazz band at the University Canteen mid-October. He blasted the young audience with an excellent opening number, Cantaloupe Island, with Dr Dickerson himself doing the Herbie Hancock electric piano leads and fills. Don't know who the other guys were, but the trumpet player, alto sax and double bass player were excellent. The drummer, a local favorite, was not in the same league, but performed sufficiently well to drive the beat on as the band tackled Round Midnight more as a Miles than a Thelonious Monk rendition before, to my mind unwisely, moving into extensive soloing of which the highlight was, in much of the audience's mind, the drummer (see OverLoad below). That said, when the trumpet and sax players soloed they were often highly impressive. Perhaps the trumpet playing was a little too reminiscent of Miles, but the sheer blast and alternate subtlety that he showed was sometimes akin to the best performers of this often sublime instrument. When music, at the AUS as anywhere, is normally fenced off in confined and defined spaces (theaters etc al), this gig was a rare treat indeed, even though this superior art form had to compete with the usual lunchtime blather and bullshit of fast food and fast talk. Sadly I was partly driven away by the ongoing solo exchanges, which at times had more of an air of a band practice that a performance. However this is undoubtedly an excellent ensemble and I thoroughly look forward to their next set live at the canteen.
Posted by Neil Partrick at 8:04 AM