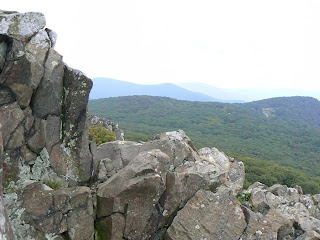 From Elkton we joined the Shenandoah national park via the Sky Line drive (Virginia) off of which we hiked a series of trails, some arduous, some not. An identity shift seemed to occur as we got the pleasure

out of spending a serious amount of bucks on hiking paraphernalia at the Rock Lands camping shop. Such an investment required justification of the outlay. It was as if these two middle aged and relatively novice hikers were over reaching themselves in a bid to justify the expenditure. The first day we must have hiked for around three to 4 hours and had to turn back from completion of the White Oak Trail as dusk fell and we wondered about our stamina for getting back up the incline. One of the earliest sights on our first day was as above (Stony Man Trail), as we took in the beauty of the mountains which then became shrouded in cloud. The next day a combination of a wrong turn and ambition saw us hike for a total of 5.5 hours as combined two trails and nearly wiped ourselves out climbing up and down steep and rocky trails. Some had glorious vistas, others were more the pleasure of the walk through woodland with deer and chipmunks a constant feature.
One such trail saw us reach an impressive waterfall where a rattle snake made a surprise landing at my feet and lay inert. Assuming its rapid path from above my head to my feet was the result of it being either dead or severely under the weather, I didn’t panic. My wife, more concerned than me, expressed the urgency of the situation which sent me into a belated and perhaps risky skedaddle as I scuttled away at some speed. However the snake seemed content just to hang in the water before bizarrely shooting down stream. The weird thing is that I am more bothered about the people walking towards us on a trail and whether we will have to talk, then I was about the rattlesnake. 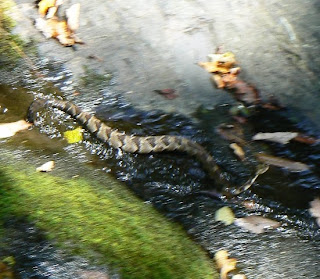 The hiking in the Shenandoah was great but the accommodation and eating situation was of a different order. A kind of hikers and campers’ theme park, Sky Land (as in the Sky Line drive) offered cabins in the woods originally constructed in 1902 when the site was first opened to the “well to do” as the description inside our tiny cabin put it. The place was very quaint and the surrounding mountains sublime, but something told me that the well to do of the turn of the previous century would not have spent the best part of the night listening to children who hadn’t been put to bed til 10 crying and moaning before the dulcet tones of Dad coughing his guts up in the early morning light finally ended my futile attempts at rest. We got ourselves moved out of there to more modern motel style accommodation which made us feel a whole lot better.
When we exited the Shenandoah and took on the southerly Blue Ridge Mountain trail we divided our time between the easier hikes off the parkway and exits for the evening into cheaper motel type accommodation. Using the latter you don’t feel like you’re paying through the nose for just a sometimes questionable rest spot. You also get to explore small towns like Buena Vista where we took in a local Mexican restaurant, and the Meadows of Dan, barely a village but with a great name and a great diner that provided healthy dinner and breakfast the next day. We exited the trail having visited the Blue Ridge Music Center where an impromptu double bill of bluegrass moved us with its almost innocent beauty. Older singer and guitar player Willard Gaillard had teamed up with younger banjo and guitar player Scott Freeman. Scott was quite a virtuoso player and a less confident but pleasant singer. Later reading made me think about banjo techniques and his use of claw hammer and finger pickin seemingly came right out of the banjo styles brought by slaves from western Africa, and specifically western sudan and Senegal. This barely appreciated aspect of the history of so called white country (and for that matter the “country” style pre blues music of black men in the Appalachians singing in English of life’s troubles accompanying themselves with a banjo and a fiddle) is documented in a highly recommended thesis on the subject available from the music center. African Banjo Echos in Appalachia by Cecelia Conway gives transcribed and pieced together oral histories of African American “country” musicians of the so called pre blues era. The guide in the music center had by her own admission genned up on the history and disparate roots of country as developed in Va. The exhibits there told a story of local musicians and the first country 78s from the 1920s when “hill billy” was first applied to white singers (as opposed to purveyors of “race” music) before the 1940s arrival of “blue grass”.

Inspired by our conversations there we drove on heading towards Kentucky where we are as I write this. Our friends have a house in the old state capital Frankfort, a quaint town of 23,000 where we discovered a wonderful book shop (Poor Richards) where we spent several hours browsing (and purchasing) second hand books, where later we returned for a gig featuring John Pope, a blues and jazz piano stylist, Matt “Zip” Irvin on tenor sax, and a double bass player Owen Reynolds. He though was the only professional musician, John being a piano technician by day and Dr Zip being a professor at EKU. On arrival we hadn’t expected much and, despite the venue, were not excited about what we mistakenly thought would be a sober coffee shop situation. When we walked in we became 45% of the audience (and much of the rest seemed connected to the venue) and sat right down near the band for what was akin to a private audience. The tunes veered between old and more modern jazz standards (MoonRiver, a Buddy Bolden song and a song about Buddy Bolden, Mose Allison etc), trad blues songs and some more contemporary or off the trail numbers such as a self penned instrumental by John (presently nameless to me), a cover of Billy Bragg’s musical interpretation of a lyric penned by Woody Guthrie about a town known to Zip - Winston, Salem - a theatrical style piece (Hail Mary) by Pamplemousse, and an adaptation of a Basque folk tune about being a tree. It was a great night, where it felt wonderful to chat with relatively local musicians and to throw out the odd comment between numbers. We returned to the porch before retiring pretty light headed well past 1 am. Earlier our friends’ friend’s daughter, who is house sitting in their absence, had come back from a work shift to check on the dogs accompanied by her friend and we semi embarrassedly told of (some of) our evening’s fun. It was as if the roles had reversed.

A dining highlight in Frankfort was Rick Paul's "White Light Diner" (whitelightdiner.com), where we ate an excellent lunch on our second day in town. The host was out of town that day but we were in good company in the small but atmospheric eatery where the locals offered good advice and kindly interest in our travels. The diner has functioned since 1943, and Rick Paul, almost a celebrity chef who has cooked for a variety of interesting personalities including Goerge Bush Senior, has made the place a source of a wide variety of southern dishes. Well worth a visit. 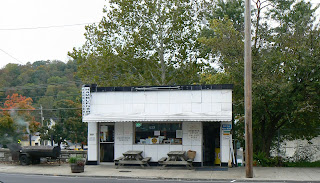 Labels: snakes on the trail

Glad you guys are having a fun time. I can't say Hawaii has the same allure but Julian is loving the beach and that is all that matters. Off to DC on Oct. 28. Take care and have a great time!

Actually, you having great Time. I wish am there.