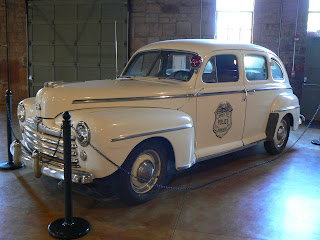 The interpretive center in Chandler OK http://www.route66interpretivecenter.org/ is a remarkable attempt to introduce the Route 66 experience to tourists who may not have an extensive background in the myths and legends of the “mother road”. Run, it seems, as a business, this Route 66 Museum provides you with a motel type experience, courtesy, we were told, of a German who volunteered his conceptual support. Visitors can lie back on white beds and look upwards to a TV taste of both past and present along the historic route. Two local photographers’ work depicts remnants of Americana. There was also a veterans’ hall that I assume functions on memorial days. It houses a 1940s type police car and a tribute to the local fallen.

There wasn’t a suggestions box in the foyer, so I venture this comment now: where is the Woody Guthrie/Chuck Berry/Rolling Stones soundtrack and/or visual installation? Europeans, like, I venture, Americans, think of Route 66 as a mixture of dust bowl migrants heading to California for its “pastures of plenty”, and, more often probably, rhythm and blues blasting from gleaming chrome Chevies. This is how I would like our road trip to have been conducted, that combined with at least a portion of Hunter S Thompson’s trunk when he was en route to Vegas. The former at least is what I think the punters need some of at the interpretive center. I should add that it may be that the dust bowl heroes get a look in at the Museum of National Pioneers down the road in Chandler, which sadly we didn’t have time to visit.

That night we crossed into Kansas (Ks) and found ourselves in Hutchinson, an intersection on what proved to be a major detour south-west. The Lone Star restaurant, a Texan style steak house with great music, young and attractive staff, draught local beer, oh and excellent steaks, saw a conversion on the road to Denver and little more than the inspiration of Neil Young’s song Albuquerque to lead us to the decision to head to New Mexico via Route 66. Poor sleep sadly took the edge off the feeling the next morning. We drove through heavy storms before the layered clouds that had darkened the skies finally cleared and we crossed the Ok border again before reaching Texas itself, or at least a north west corner of it. There we found a comfortable redoubt at the lesser-known motel chain, Rodeway Inn. One floor only and no internal doors. The manager had got out of east Africa in the early 70s, hoping for a better life in the UK before ending up managing this pleasant if a little overpriced motel. The next day we entered Albuquerque (ABQ) to the sound of The Who’s Live at Leeds. In (almost) the words of the Neil Young song of the same name, we had hired a car, were moments away, and had the means at least to get in the mood. The University Lodge – an independently owned motel run by a genial Indian – was our first stop, up on Nob Hill, the smarter end of Central Avenue, ABQ near the University of New Mexico whose partisans dominate this part of town. On the ground floor at a two level motel we were risking disturbance, but the room had a pleasing feel and a welcome bathroom window looking out on the street. However an hour listening to a guy punishing the bed above us and exhausting his girlfriend’s (?) repertoire of excitable noises in the middle of the night, followed by a car horn repeatedly going off outside our window, and then a full-on Mexican moan fest about domestic woes obliged us to seek better accommodation.

That day we hiked near the Sandia mountain, whose often snow topped peaks are an omnipresent part of the city’s backdrop. Exhausted and dehydrated after foolishly packing insufficient water supplies, we checked in to “The Imperial”, another independently owned motel at the other end of Central Avenue, in the Downtown area. Despite getting an upstairs room next door to a store room, depression hit me as I spotted the dreaded and previously unsuspected internal connecting door, source of many a negative motel experience for me. More importantly the area had a bit of a badlands feel as a majority of the motel guests didn’t have cars and my hired Chevy Impala seemed to get undue attention. The fact that the manager spoke to you through a glass screen and made you sign for the (non functioning) remote didn’t help my confidence. Unwashed and still dehydrated we headed for a drink and found the splendid Malone’s, dark with a huge circular bar, great service and a cool 80s soundtrack (sic). We knew that we should have split for dinner elsewhere but could not resist yet another pint of Sam Adams on draught to chase down an in house burger (surprisingly good) served at the bar. The place was popular but this was 9 o’clock on a Friday night and we had plenty of room to get full and thorough attention and a lot more than elbow room. In any British town at this time on Friday night there would be scrum at the bar of an indifferent venue with impersonal service. We finally got out and discovered an excellent micro brewery bar (Chama River). Four pints on, we headed back to The Imperial and the promise of a number on the balcony of the badlands. We surveyed the scene of drunks and suspicious parked up vehicles in the neighbouring lot, and a weird mixture of other guests passing us as we took in the scene. I faded out before the morning-after beckoned. Immobilism was relieved by the tender mercies of The Standard Diner (www.standarddiner.com), an excellent recreation of a deco-style eatery built in 1947. The walls were covered with the work of local artists and photographers, and the diner served good food and coffee with a kick – a rare US experience. At the record store, “Natural Sound & Vision” on Central, I splurged on bargain vinyl at $3 a time and, for a while, my long time addiction was satiated. 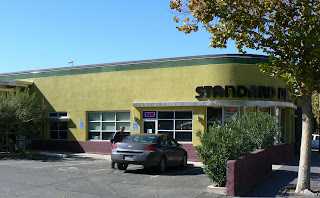 Posted by Neil Partrick at 9:15 PM

The Standard Diner was the best burger of my life!
http://eatingtheroad.wordpress.com/2009/11/03/standard-diner/