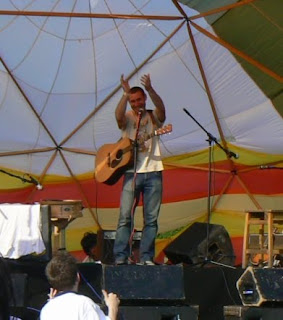 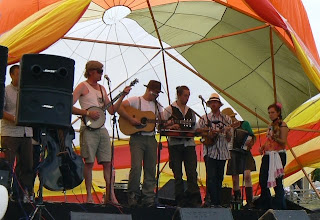 Livestock is a fanstastically named back to basics music festival held in a small village in Oxfordshire where farm animals meet musos. I had not sampled the delights of this four year old event before and had sadly missed the first two days, which were held in the nearby Red Lion (This is a small festival). Festival director Malachi, whose family owns the farm including the land on which this almost intimate festival was partly taking place, goes to a lot of trouble to bring in acts from around the world as well as provide slots for friends and acquaintances. The result is a barely known gem. It almost felt Glasto 1972 (tad smaller admittedly) with comments overheard about how it had grown (I would say there were 200 people present on the Sunday afternoon). I don’t think they're in danger of spoiling the vibe just yet.

The Knights of Mentis kicked up a storm, livening up the last afternoon of festival with country and blues-style banjo and guitar picking, accordion and fiddle, and hearty singing that brought plenty of people to their feet. Their version of Bob Dylan’s much ignored Gotta Serve Somebody (from his first Christian album) was a revelation, while I am not sure I will be able to listen to the Led Zep original of Rock n Roll without wondering if the Mentis haven’t nailed it for good. Lenny (see below) was on banjo and mandolin, while earthy singing from the guitarist and one of the other two banjo players kept things lively. Festival main man Malichi was on double bass. Stage left stood Rhys Iffans doing a passible impression of Peter Cook as a folkster; he had some droll repartee to boot.


Bowell & The Movements are either criminally misnamed or singer, and lead writer, Rob Powell, is simply emphasising the creative tension between the intense emotion of some of his songs and the humour that somehow coexists, even sometimes in the same verse. This in essence is what this band does: ramshackle stompers and heart-wrenching ballads. During Rob’s solo set there were moments when his ability to hit the emotional funny bone in his half-innocent plaintive laments for love lost (or not found?) that you thought this guy pisses all over much of the rather precious(mostly Brit) balladeers from this millenium onwards. But then, just when he was in danger of getting mawkish, the daftest rhyming couplet would make you wince with delight. I don’t know the names of the first and last songs of the solo section of the gig as I didn’t manage to get the names down, possibly because I was somewhat overcome. Rob should get some of these (possibly new) solo tracks out there (there are some solo numbers available to hear on My Space). Perhaps a dedicated band website, together with one or two of the band’s stompier numbers is in order. And what about that band? Sterling performances from mandolin player Lenny (aka Midnight) and bassist Patrick Leonard fleshed out the more up-tempo numbers, while a very late stand in on drums (from earlier act, The 309s) helped to keep up the rhythmic pace.

Despite the official drummer dropping out, this, the first live reunion of The Movements for 12 years, was high on emotion, not least for the hard-core Bowellistas in the grass mosh pit, and for many, including those less familiar with the Movements’ work, an absolute delight. This band – and in particular it has to be said – the singer’s solo songs – show a lot of promise and a lot of passion. Of course that does not guarantee any kind of professional future, but people were moved out there and it wasn’t just the Oxfordshire Ales that were responsible.
Posted by Neil Partrick at 9:40 PM