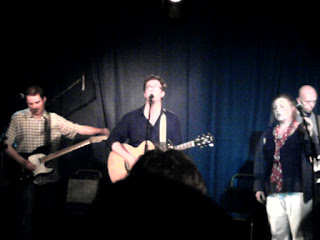 Having waited over an hour past the scheduled time to be allowed to pay my £5 and go upstairs to the Theatre at Ye Olde Rose & Crown on the second night of Stow Festival, I was not in the best mood to appreciate the promised night of folkish delights.

I sat frustratedly through a solo set by a very pleasant woman called Sarah (aka “Bobbing for Apples”) that suffered from feedback that an hour of extra sound checking had not rectified. Audience reaction divided between semi pissed camp followers and polite applause for someone trying hard in very trying circumstances. She was actually a lot better when she really performed genuinely unplugged to avoid the feedback. Sarah was followed by a better but still mixed performance from another solo performer, Blabbermouth (a name more apt for the compere Paul Mosley). His set was better if a tad over earnest.

I was in need of something distinctly good to bother sticking around any longer in this hot and socially exclusive theatre room. Local band Candidate (see pic above) got off to a bit of a shaky start, but hit their stride half way through. Some nice Byrds-like arpeggio guitar and genuinely tuneful and emotionally engaged performances upped the quality of this gig no end. According to the band’s lead singer who I met earlier, few people like them except some comedian bloke who writes in The Grauniad called Stewart Lee. I think they deserve a wider blessing than him. 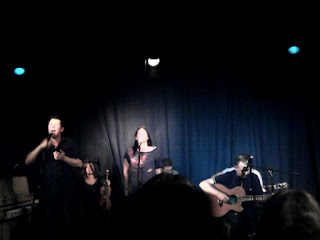 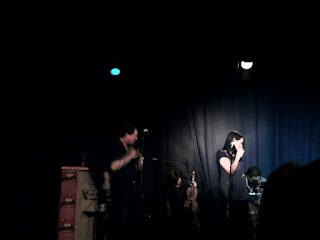 Moses (see pics above), a now E17 based but originally Huddersfield folk combo, I think, were apparently re-crossing some particular epic journey to grace us with their presence after 10 years apart (or so I could gleam from the onstage and rather cliquey banter by some of the blokes in the band with their dedicated followers).  Paul Mosley turned out to be their lead singer but even he, the night’s organiser, didn’t condescend to say what the name of his band actually was. I had to work it out from the description of their set in the programme. They were good, however, albeit that their incessant upbeat rootsy rousing performances occasionally seemed a bit forced, a bit like much New Folk in general (c.f. the Mumfords). The guitarist has the making of a good stand up comic, shame he didn’t do a warm-up while we were waiting for the gig to start.

I can’t say if From The Deep, the final act (as billed), performing some kind of “swampy blues”, appeared or if they were any good as I had exited by this point. My problem that, and the late start. I think these gigs need better organisation, better sound engineers and a higher quality threshold for some of acts. Remember, Stow Fest/Ye Olde Rose & Crown organisers, some punters are paying, not (as elsewhere) cocking an occasional ear from the luxury of the bar.
Posted by Neil Partrick at 2:07 PM

I was there, and at the start of the performance Paul Mosley said "we're Moses" - clean your ears out next time.

were the bogs adequate to purposes?