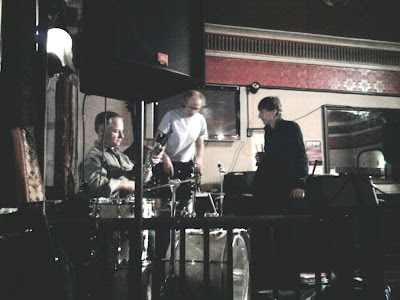 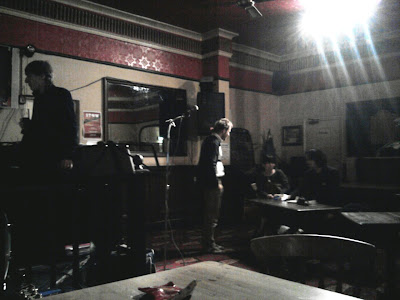 The four day Stow Festival
kicked off Thursday night (20.9.12) with a selection of gigs in pubs and clubs across, unsurprisingly, Walthamstow. I got to see two. Not at the same time you understand, but by cycling fast under the influence. I was initially waylaid in Billy the Builders Bar in Clapton where I got bored waiting for a would be Django Reinhardt to appear and peddled back to E17.

The Duke’s Head (established 1837 it says above the stage; I think that’s actually when Wellington took command of the British armed forces) is in Wood Street. This is apparently now a regular free music venue whose threshold I had not crossed until walking into The Irregulars in full pelt. The Irregulars are a ska band specialising, it seems, in songs from “The Harder They Come” Soundtrack, some late 70s early 80s ska revival covers, and some obscurer numbers, obscure to me at least. There were quite a few ageing rude boys in attendance (all terribly polite these days), quite a few regular drinkers, and a few not so “local” looking people. There was a great atmosphere and the almost all-white band could play alright. Reflecting the inclusive spirit of the now rather old UK ska revival, not all the punters were white I am pleased to say.

I entered on “Miss Jah-Maica” (ouch) and exited on “Too Much Too Young”. There were two Beat covers as well, but sadly no “Stand Down Margaret” (she is reborn, no?). The evening was a lot of fun. Beer, like in so many pubs in the Stow, is not cheap at the Duke, but worth it perhaps if other bands who play here are of this calibre.

My next and final stop of the night was The Victoria. Once feared by “non-locals”, this upstairs and out of the way place on Hoe Street is actually a refreshing change from the more renowned music and arts venues such as Ye Olde Rose and Crowne where beer is pricey, gigs (like during the Stow Festival) are often in the theatre upstairs and therefore not free, and it’s not that easy to get a drink when busy. The Victoria has taken to holding Glam-Jam nights on Saturday that also charge, but offer an entertainment and a songbook hard to find elsewhere in Walthamstow.

The Victoria last night was hosting a free performance by Los Otros (see pics above; sadly taken after the event). They are modern jazz band with a front man with more than a touch of the trad about him. I only caught the last three numbers so it’s hard to judge the performance properly, but these boys can certainly play. A young tenor sax player (Polish, so I was informed) with good feel, and a very able drummer, double bass player and pianist who soloed to great effect. The bass man had more than a passing resemblance to Steve Howe from Yes (the band that couldn’t say “no”), which threw me somewhat. The front man sings at some distance from the mic which allows his voice, more a whisper than technically brilliant, to work to full atmospheric effect on top of, but not overly dominating, the excellent players. They finished with “All Blues”. I didn’t expect to hear a track from Miles Davis’ "Kind of Blue" album in The Victoria. Excellent.