I sat down not knowing quite what to expect from a gig at the Union Chapel in Highbury & Islington by Lau, a band I had only heard the name of before. I fiddled impatiently with the free lapel badge they’d kindly left me and other members of the assembled throng. The gig began with support act, State of the Union: a couple of great acoustic guitar players who could not lift this enormous and formerly sacred space. Pleasant, but essentially dull. So it was with some relief, my part at least, when Lau hit the stage.

Lau are a three piece, largely Scottish, ensemble who play acoustic instruments. Accordion player Martin Green was aided by a box of computer tricks that made it hard for me to differentiate between a manipulated delay effect and the possibility that he was sometimes using pre-recorded tapes. The fiddle player Aidan O’Rourke deployed an array of effects pedals, but these at least told me he was manipulating his own sound. The possible use of taped sounds isn’t necessarily a sin of course, even for a band that regularly wins or gets nominated for Folk Music awards, but the quantity of artificially generated musical effects is surely an issue, not least for a band whose website emphasises their shared love of “hardcore traditional music”.

Having not heard a note by them before, it was perhaps inevitable that it would take a while for me to get their particular blend of what I can only call folk electronica (I may of course be blissfully unaware that this is the name of an established musical genre).

However there were points in the first half or more of their performance that I got tired of the incessant endless climaxes of instrumentation generated by Martin, Aidan, and Kris Drever, who was genuinely, I think, playing an acoustic guitar.  In the latter part of the gig I began though to be converted to what some apparently call the republic of Lau-land (sic). This was helped by the fact that we heard more of Kris Drever’s splendid vocals as part of a perceptible shift in emphasis toward a more recognisably song based performance.

In particular I noted “Torsa”, a tribute to a Scottish isle of that name from where I think Aidan hails. This deployed Lau’s intense and layered "folk electronica" to great effect, but, as it was held together with Kris’ vocals, it didn’t lapse too much into the orgiastic noodling that had prefigured so far. A triumph, in fact, of substance over form. I do wish they’d stand up though. How, I wondered, can you perform such uplifting and upbeat music from a sitting position? Perhaps this is all some kind of non "band" schtick. 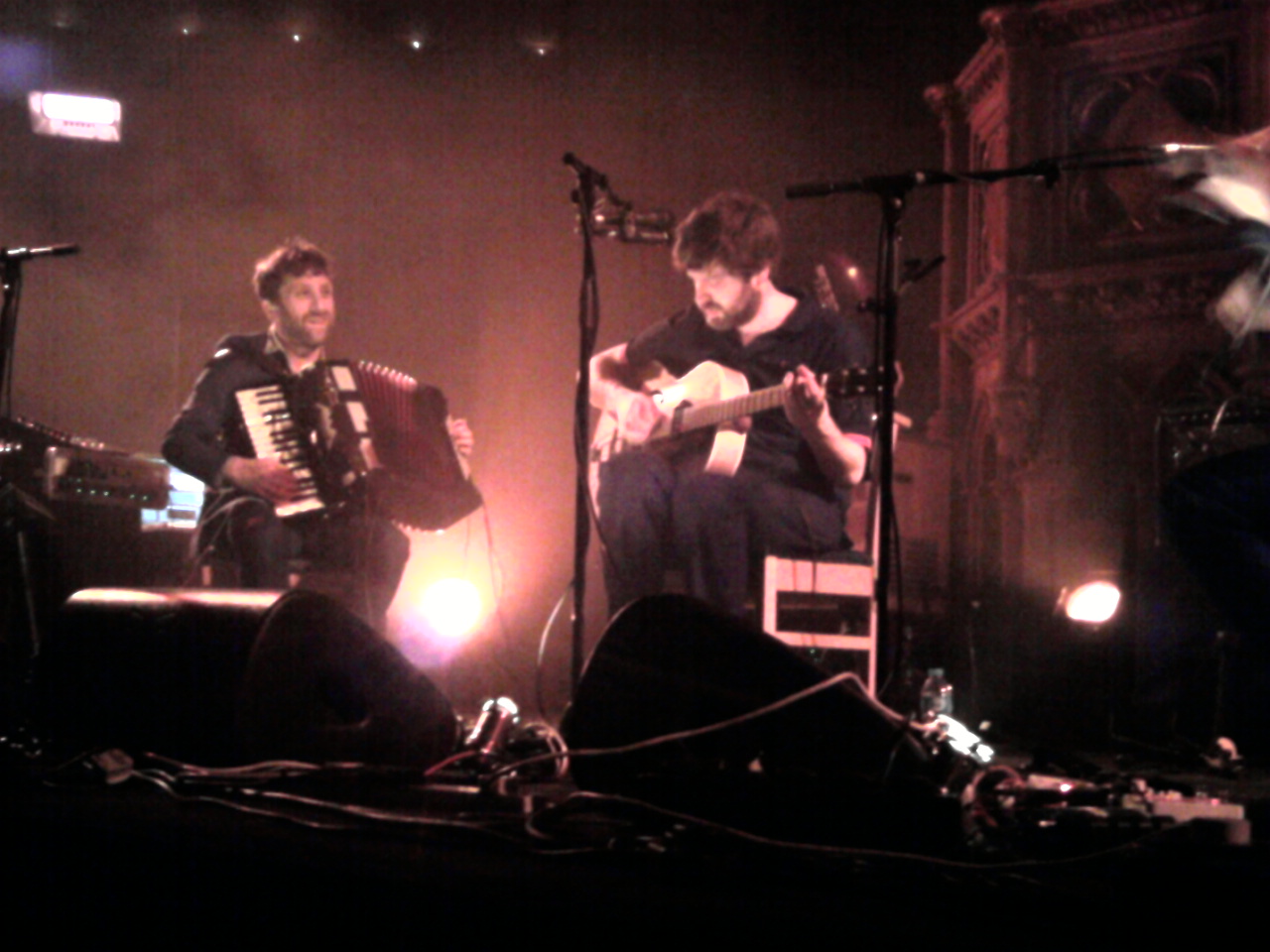 A cover of “Ghosts”, this one apparently by Niall Waterson (I assume from the singing folk family), came straight afterwards. It also proved a major highlight.

The hearty demand for an encore led to Lau deploying an inspired back to basics approach as they brought on other musicians - State of the Union and a couple of women from the apparently excellent band that performed in the bar in the interval - for a more traditional sing song in the form of a cover of “Goodnight Irene”. For partly personal reasons this brought tears to my eyes, but also because Mr Drever and the band gave a wonderful song such a splendid treatment. Less is sometimes very much more.

I am now wearing the badge. 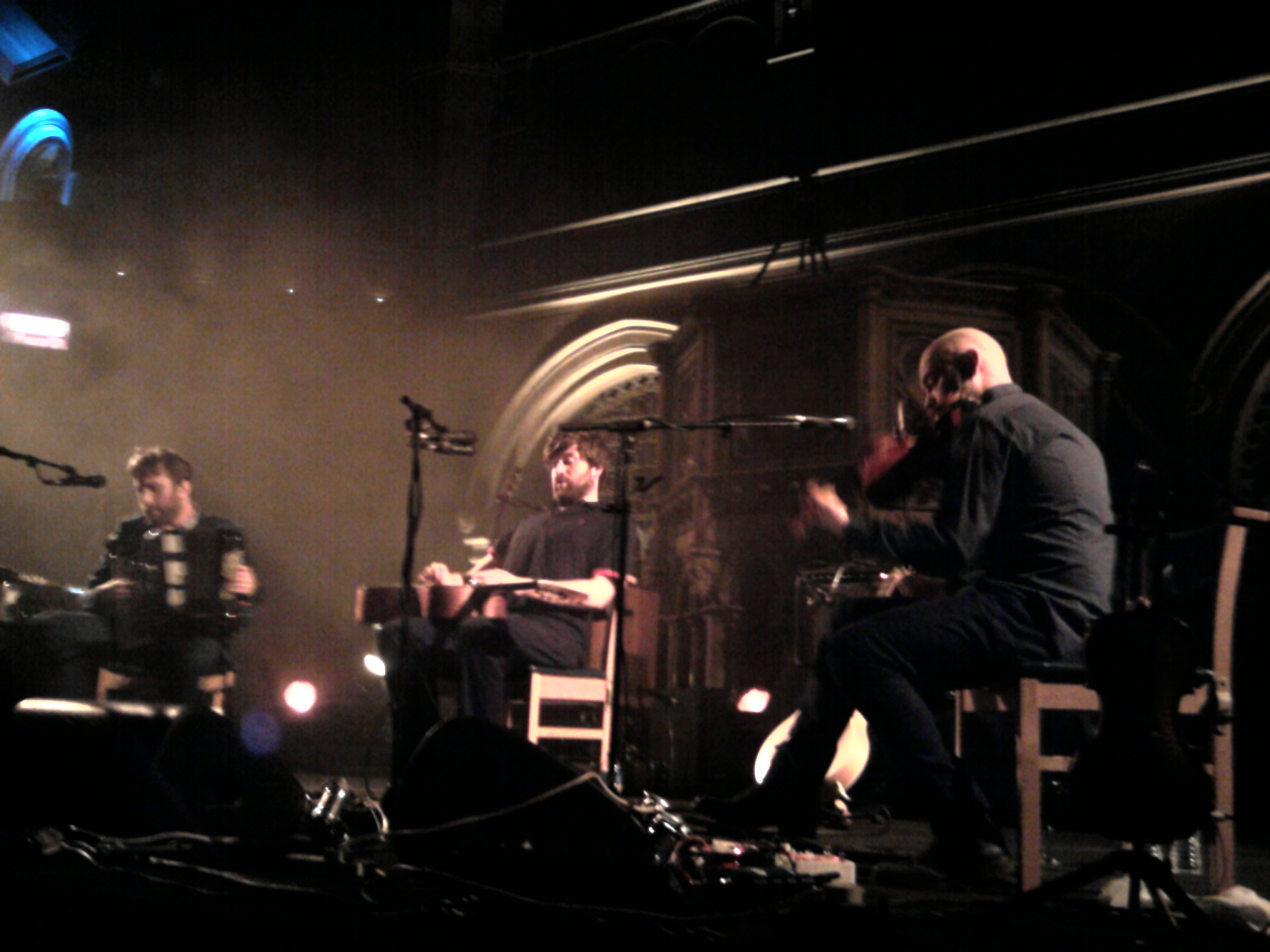 Posted by Neil Partrick at 6:53 PM

This is a rather low key review for a gig that had a lot more high. I thought it was a rare combination of the sonic essence of live performance without any compromise on a very wide emotional range. Quite brilliant in fact... you grumpy old git.

Agree with NSB - a rather cool review of what for me was an almost ecstatically liberating experience. You don't mention the riveting interaction and interplay between the trio - no need for them to stand up to communicate that totally committed passion and energy. And whatever Martin Green is doing with his electronic gizmos - in itself wonderfully sonically boundary-pushing - he's got to be one of the best accordionists in the country. Btw - thought Ghosts was a Lau composition??

Thanks to Neuromancer. I think perhaps they did a LAL Waterson song as well as doing "Ghosts"....

Folktronica is the musical genre you were grasping for methinks....based on your intriguing review I might venture out to see them when they play at the Delawarr Pavilion next month....an increasing cool place to see a gig by the way, and an architectural icon of course...much like my good self! Went to see The Unthanks there recently, playing the soundtrack for the film 'Songs From The Shipyards'...powerful and haunting sights and sounds with the band discreetly performing in near darkness....Wonderful band, go see!