Manfred Mann’s Earth Band (MMEB) were the first band I ever saw live, when, 33 years ago, I went with my elder brother to see them at the Brighton Dome. Seeing a line up of the Earth Band with only two surviving members from the 1970s was never going to match a 16 year old’s rock rite of passage. Back then they were a band that, while far from hip, had had some success only a few months earlier with a consistently good album “Angel Station”. Then, only in their mid to late 30s, they had toured the album extensively. They also had a mixing desk at The Dome. And, they had Chris Thompson on vocals. His is the voice on the most highly rated MMEB albums, all of which, unsurprisingly, were released in the 1970s. He was never especially mellifluous or highly dextrous in the vocal department, but Thompson could do subtlety, and gritty, as required. 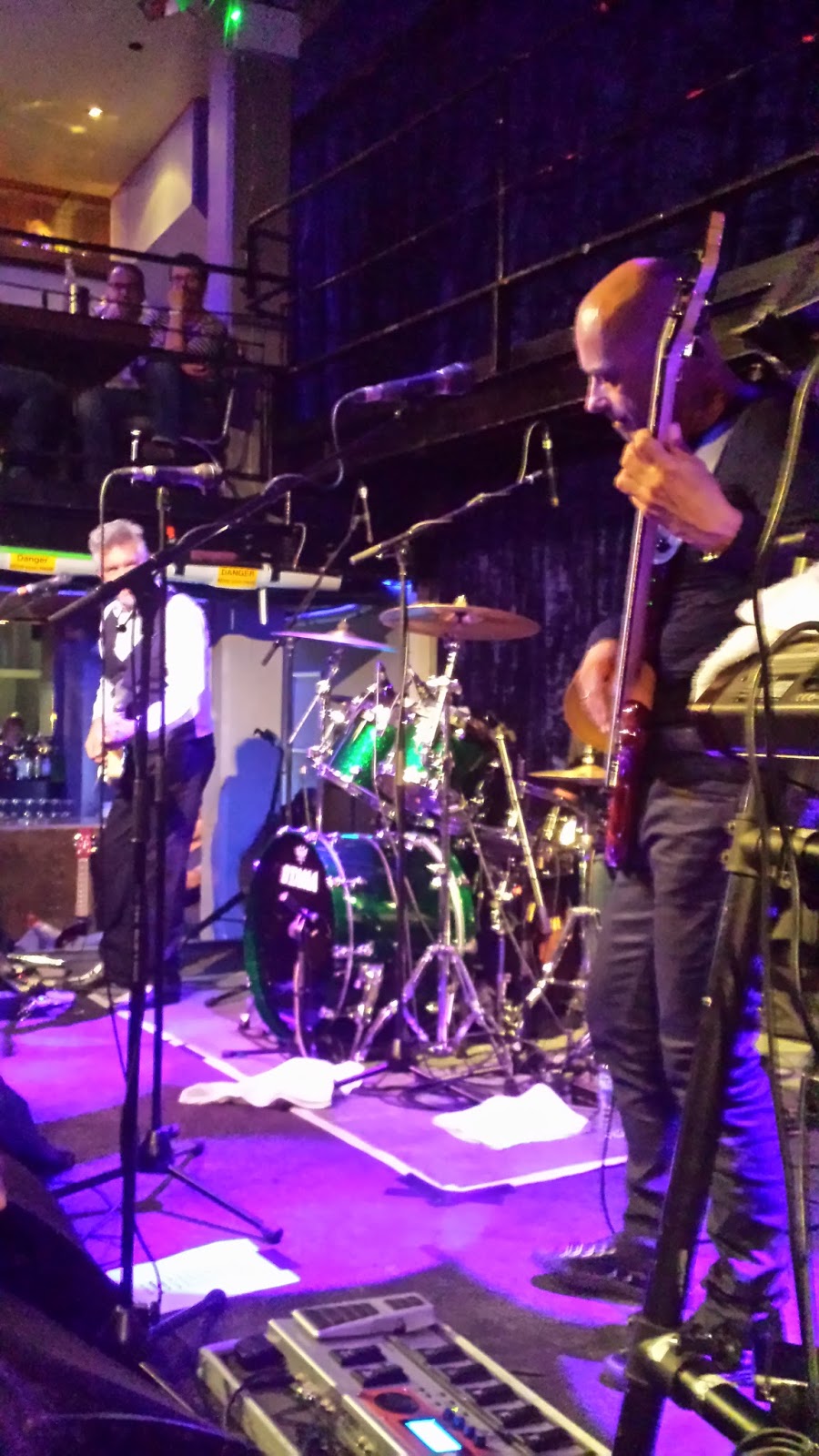 Tuesday night’s man in the vocal spotlight was one Robert Hart. He doesn’t play much guitar, leaving himself free to pose with the mic stand like he was Rod Stewart in the 1970s. Close-up, in an intimately small venue like the Jazz Café, this is not a pretty sight. Hart is a competent but uninspiring member of the rock belter school of vocals. It was little surprise to discover later that he was Bad Company’s singer long after Paul Rogers had moved on. 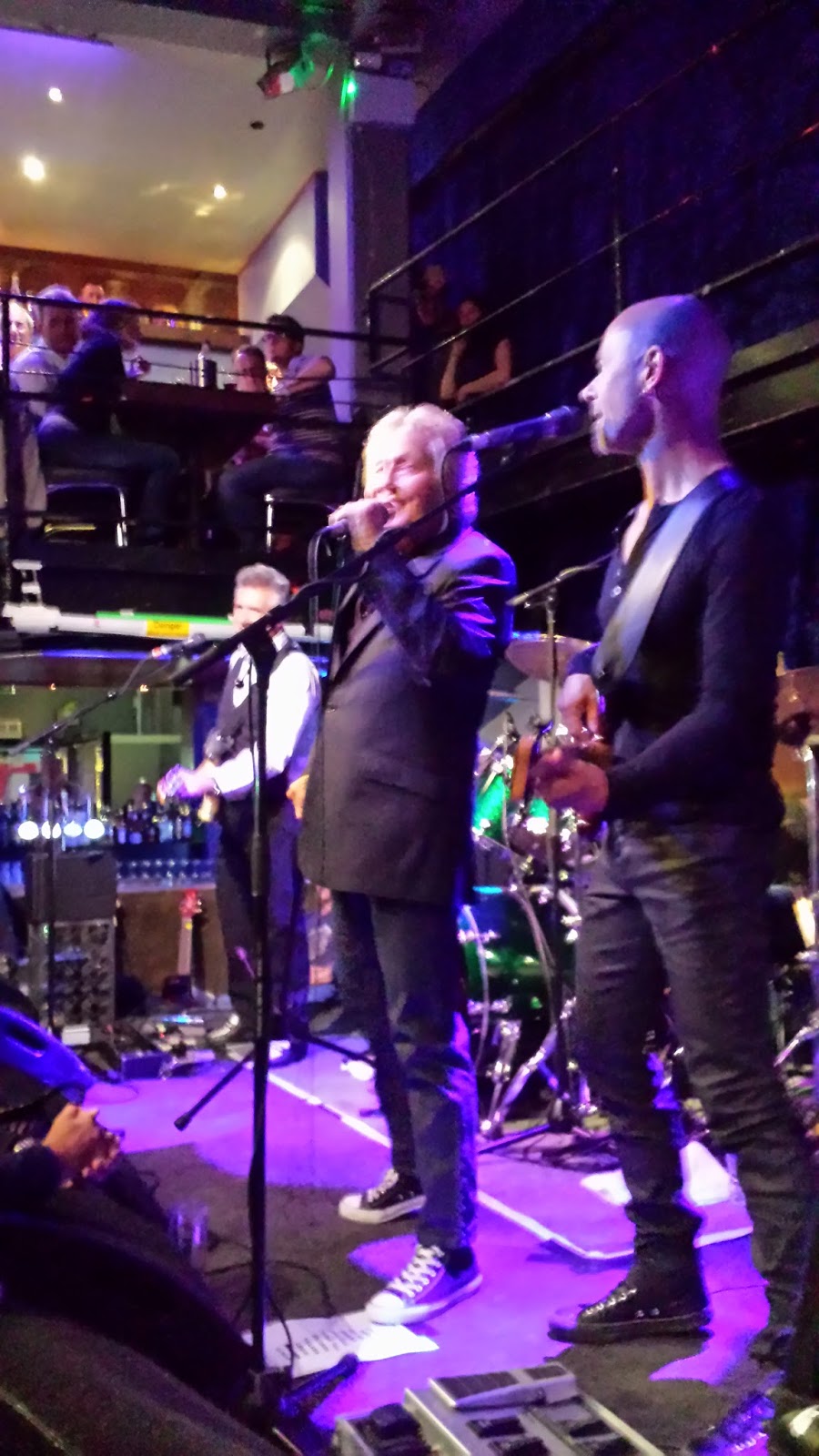 MMEB have a great bass player, Steve Kinch, almost a veteran himself as he joined way back in 1986; a solid and slightly more youthful drummer, Jimmy Copley; and of course an almost undimmed 72 year old Manfred Mann on trademark keyboards together with original member Mick Rogers (no relation) on lead guitar and occasional vocals.

This was a relatively short performance; the night’s entertainment was partly filled with 45 minutes of Lesley Mendelson, a painfully sincere and wholly inappropriate 20-something female singer-songwriter from New York. The Earth Band themselves managed just eleven, admittedly not short, numbers, most of which would have figured on any “Best of” compilation. Subtler, but, for fans, highly popular numbers were probably out of Hart’s technical and emotional range. In some cases they would probably be too musically challenging for the rest of the band too, at least without that mixing desk and more time spent in rehearsal. The atmospheric quality found on numbers like “Waiting for the Rain” (from “Angel Station”, 1979); “It’s All Over Now Baby Blue” (a brave Dylan cover from 1972); or “Drowning on Dry Land” and “Circles” (from their most commercially and critically successful LP, “Watch” (1978)) was nowhere to be heard. The performance of “Martha’s Madman”, taken from “Watch”, failed to get remotely close to the drama of the original.

“Blinded by the Light” (originally a Springsteen song) was both obligatory and, as it turned out, well performed on the night. Hart, for once, did not overdo the vocals, while he and Kinche provided a solid, but not overly dominating, chorus to accompany Manfred’s verse part (as per the band’s original version). MMEB are renowned for their covers; detractors would, a little unfairly, say not for much else. In most cases in the 1970s their interpretations actually complemented, even, in the above Springsteen example at least, arguably enhancing the original, in the process of often changing songs beyond recognition. “For You”, also performed, proved a far, far less satisfying cover of a Springsteen original. It wasn’t totally absurd though that a third should be added to the night’s repertoire. “Dancing in the Dark” though proved to be just about the worst cover I can remember having had the displeasure of hearing a name act do. (And I heard Westlife do “Matthew and Son” on a rainy morning in London in 1996). This was embarrassing, even, it seemed, to some of the members of the Earth Band. Total cabaret, and not particularly well done. Unlike “Blinded by The Light”, and the welter of Dylan covers for which they’re famous, it was made all the worse for being more or less a straight reproduction, at least until Manfred tried to rescue it with another blast of what, live, sometimes became an excess of keyboard noodling.

Things picked up when Robert disappeared and Mick Rogers took over vocal duties. He is weaker in volume but more in keeping with the style for which the band is renowned. He sang lead on “Father of Night”, a relatively obscure Dylan song first recorded by MMEB in 1973, and made it one of the highlights of the evening. When most of the rest of the band then exited for a well-earned comfort break, Rogers dusted off another gem, this time from an even earlier Manfred incarnation: “Doo Wah Diddy”. Singing with only his guitar and the drummer for accompaniment, Rogers alternated between the pace of the mid-60s original and a bold, rockabilly-style, reinterpretation.

A fairly decent fist was made of “Davy’s on the Road Again”, written by Robbie Robertson and John Simon, a live version of which MMEB are as equally renowned for as “Blinded by the Light”. For the encore yet another song from “Watch” was chosen, Dylan’s “Mighty Quinn”, which soon relapsed into a pub-style sing along.

It has to be said that there was a lot of emotion on the stage. The band, very friendly, upbeat and engaging with the many apparently recognisable faces in the audience, were plainly having a good time, including even the irascible old anti-star himself, Manfred Mann. At times he would delight his long time followers by emerging from behind his fixed and rather defensive bank of keyboards and strut his stuff with a strap-on “keytar”. 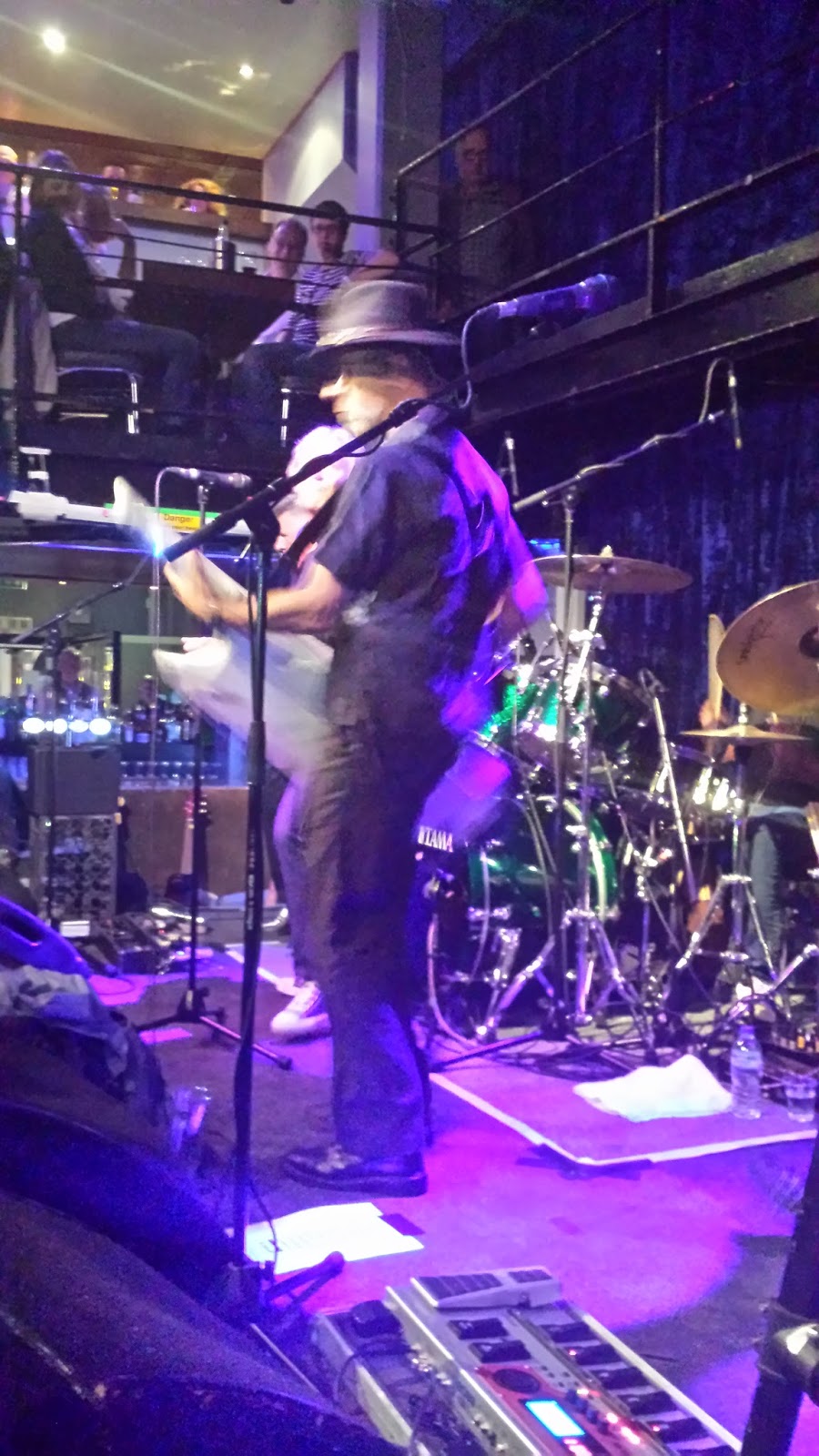 When the band linked arms for one of several bows, you wondered how much longer there would be as many as two original members still doing this routine. “For as long as people want to pay,” he recently commented, and there is a very hard core of devotees who will no doubt go on doing so for as long as he is still able to play.
Posted by Neil Partrick at 1:49 AM

This is great. Its like being there. ... which obviously i would have been had it not been for the 'events dear boy:, events'. Disappointed theres no bootleg video tho... or is that coming?

Your intimate knowledge of every track, its album and its pedigree is very impressive.

You don't sound overly impressed! At least there were a couple of original members, including the "Mann" himself.. Our current drummer had a relatively lucrative spell with "The Mixtures", who were responsible for The Pushbike Song in 1970. By the time he joined there were no original members left! :)

Excellent review, it really "Showed" me your experience of the night, I was almost there with you. I admire your minutiae knowledge. Thank you. Emma

Many thanks for all your comments, much appreciated. N

Re: Mr. Mann and his current conglomerate of earthlings, sounds like I didn't miss much....'tis in my view often the problem with bands which were big a number of decades ago and now currently contain only one or possibly two members of the original line up, not to mention the survivors having long since past their prime. They will often be ultimately disappointing, unless one is a die-hard avid fan, grateful for any offering served up.

I hear Mr. Hart's agent is trying to track you down, Mr. Hart being less than enthusiastic of your assessment of his vocal abilities.