Three return tickets to Tata offered the inviting prospect of an exploration of the industrial landscape and countryside outside of Budapest. Tata, Wikitravel told us, was located less than an hour from the imposing beauty of the Keletti Station in Hungary’s capital.

Situated between mountains and containing much picturesque beauty, the arrival and the journey were both bound to enthrall. The station stop identified on the board at Keletti Station was Tatabanya, of which we assumed Tata was the diminutive. Disembarking nearly an hour later, we found the station a splendid homage to communist brutalist architecture, and no less attractive for that. 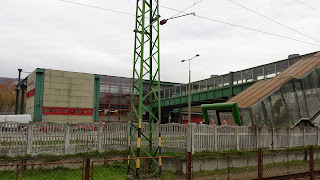 For anyone familiar with Kőbánya-Kispest in Budapest, this was a special treat. No sign yet in Tatabanya station of the gentrification that has begun to afflict Kőbánya, or at least its adjacent shops. Water poured down on the inside of Tatabánya station as we took the bridge across the tracks to the station entrance. Deciding, sensibly, to see what time the trains back were, I realised that Tatabánya was in fact a distant cousin of the Tata we had planned to see. As the next train would not be along for another 45 minutes we decided to explore the station complex further. The ubiquitous “Relay” proffered soft drinks and snacks, however the station’s toilets offered essential relief. Tightly guarded by a man whose life appeared to alternate between them and the bar next door, they were, at 100 Forints, arguably overpriced. That said, the provision of two sheets of toilet paper was a kindness that helped offset the olfactory onslaught contained in the Gents’ section. From a vantage point outside we gazed over the lines of empty tables below, suggesting a flea market that today hadn’t quite hit its stride. One table had a selection of cheap clothing on offer, looking lonely alongside the banks of unoccupied green trestle tables that dominated the scene. Walking down below to the car park I stared at the town below, caught in a time warp that the range of international names in the adjacent mall could not detract from.

We were delighted to see “Roxxy Music (and Café)” ahead of us. I only wished that we had taken the time to explore the venue. Perhaps it would have been a wall to wall tribute to Britain’s finest exponents of art rock, necessarily adding an “X” in order to avoid a law suit from a passing Bryan Ferry, unable, no doubt, to appreciate the joke. 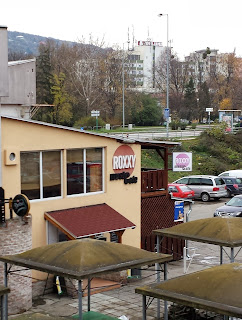 A while later we caught the train to Tata. We passed the International Spar and rows of bungalows with more than a hint of the shtetl about them, each one growing their own vegetables and quite a few had animals in tow. Tata itself was more in keeping with the advanced billing. A notice outside told of the weekend’s entertainment back up the line at The Roxxy. “AB/CD” looked enticing, although perhaps not as much as “Elfsong”. I wondered if a Roxy Music tribute band had ever trod the boards there, featuring, perhaps, Ryan Fairy on vocals. 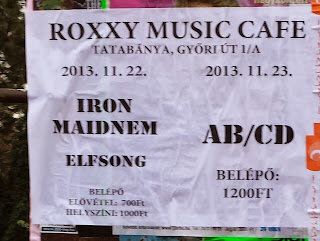 Tata itself was almost inevitably bound to disappoint given what was available further on back down the road. The rain set in as we ignored the bus stop outside Tata station. We headed to what we hoped was the centre of town, past attractive new build and the curiously named Hotel Kiss. “Csókolom” is the traditional greeting all Hungarians make to each other, literally meaning “kiss it”….the hand, that is. We got more and more drenched before deciding on an about turn in order to catch the next train back to Budapest. I still wish we had stayed longer in Tatabánya. AB/CD are on tonight.
Posted by Neil Partrick at 9:47 PM

Cool. Glad to see the wanderlust remains undiminished. I just had two extremely helpful Hungarians assemble a new bed which had unexpectedly arrived in many pieces. Hurrah for Hungary :)

Brilliant, hilarious account of an unforgettable trip. Neil, you should concentrate on travel writing

Many thanks to Messrs N Romantic and Syd B for their appreciation. Here's to it for Hungary indeed.

You missed a lovely town in Tata. You have to walk way past the Kiss Hotel. The bus would have gotten you closer to the lakes and the castle.