When Wreckless Eric walked on to the tiny stage upstairs at the Prince Albert pub in Trafalgar Street on Monday night no one seemed to recognise him.  At first I wondered if he was an ageing roadie. As he stepped up to the microphone there was no audible acknowledgement from the half filled room. Seeing the smattering of chairs occupied in front of him, Eric observed that he had advised the pub not to put more out as his audience would be better off standing up in order to avoid getting haemorrhoids. 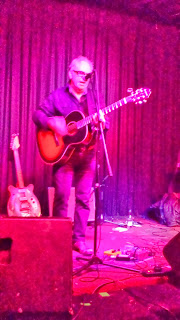 Storming into his first number, which was unknown to me, Eric thrashed his acoustic and sung with angst about a seemingly monotonous childhood. His voice was never technically brilliant, but it is still high up on the emotional register. Everything is intensely personal with Eric. As he explained to the Sussex audience, he is a local boy. He grew up in Newhaven and went to school in Lewes. Despite currently residing in New York where he paints and performs, after many years spent living in France, Eric’s youth obviously still resonates with him and with his writing. Droll humour runs through lyrics stuffed full of personal reminiscences, some of which he sparred about with members of the audience. The upstairs room at the Prince Albert pub is as intimate as a gig can get for both performer and audience. Several times Eric only part jokingly asked people to stop staring at him.

Eric is best known for his Stiff Records material from the late 70s. Many numbers from that period were played on the night. These included “Reconnez Cherie”, and his biggest hit “Whole Wide World”. Always an intense experience, it lost little by being played solo. Not that Eric Goulden is the kind of performer who could have considered a cosy “Unplugged” groove. On the night many of his songs ended up as a thrashy, noise fest. Playing his acoustic through an array of effects peddles, Eric at times threatened to outbid “Metal Machine Music”, Lou Reed’s “pioneering” four sides of feedback released in the early 70s. 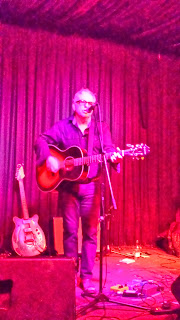 On “Joe Meek” Eric sung the praises of the man he called the inventor of British pop music. Meek is most famous for creating “Telstar” at a recording studio he constructed in his tiny Holloway Road flat in North London. That was just round the corner from a car boot sale where my wife experienced an epiphany after spending 50p on a CD copy of “12 o’clock Stereo” by The Hitsville House Band, Eric’s Americana-sounding, largely French, mid-90s combo. From that album, he performed a powerful version of “Can’t See the Woods (For the Trees)”. Sticking around for a chat afterwards, Eric told us that he is planning to record some songs from that period with The Len Bright Combo, a mid-80s garagey-sounding outfit that he has recently been gigging with again.

Eric’s lyrical references and banter suggest a man whose quest for love and happiness has been a rocky one. Yet he declared to his audience his happiness at being married to his sometime song-writing partner and co-performer, Amy Rigby. He ended his set with one of Amy’s songs somehow spliced together with one of his own, “33s and 45s”. This was largely comprised of lyrics based on classic song titles. It proved a suitable closer for a performer who obviously attracts the older fan keen to reconnect with a much earlier period in British music. Yet there is nothing nostalgic about Eric’s musical shtick, even if his between songs banter at one point found him talking about green double-decker buses.

Wreckless Eric is awesome.... I was only there because of my love for just about everything on 12 O' Clock Stereo. I was not expecting to be totally blown away by the fact that one little guy in his 60s on a tiny stage could make so much noise AND be emotionally sonic at the same time. I also came away having learned a new word and will be employing the less vernacularly travelled 'chuff' at every opportunity.... .

I should clarify that young Eric is a mere 59. It was awesome and I think the phrase was "as tight as a nun's chuff", which I think was used with reference to the Hitsville House Band, but I was a little drunk at the time...