Simple Minds Take Us To The Waterfront

Attending a 20,000 capacity music arena is not really my thing. Last night at the O2 however promised to be a special event. Simple Minds supported by Ultravox. I don’t have a single record in my collection by these bands. I liked “Vienna” at the time, although I usually effect the argument that they were better before Midge Ure took over and the “experimental” John Foxx quit to work things out in his “Underpass”. Simple Minds? I was aware of the earlier stuff being a bit “experimental” too, but by the time they had become the all-conquering stadia behemoth circa their very 80s album “Once Upon A Time”, I was almost violently opposed to them. I actually recall gleefully burning a copy of this album with a friend while its owner looked on horrified. Looking back I feel revulsion at my Nazi-like act and self-righteous assumption that I somehow knew what was “correct”, musically or otherwise.

The three of us arrived at the O2 shortly after Ultravox had hit the stage. Located up in the Gods or, more accurately in arena terms, a long, long way from the stage and with only a sideways view of the band, my normal reservations about such venues were affirmed. Many of the songs were unrecognisable and, although played well, they struggled to fill out the enormity of the venue. When “Vienna” kicked in and Midge sang “This means nothing to me,” it took on a very contemporary meaning. His voice though held up to the song’s challenging chorus and the band performed their best known number with feeling. Apart that is from a rather rushed instrumental passage due seemingly to the fact that the violinist was doubling up on keyboards and literally had to run between the two.

The O2 is a very organised place. There are plenty of places to eat at before the gig and, once inside the arena, punters are well served with bars and toilets. Many fans availed themselves of both in equal, mutually dependent measure, throughout the performances. By the time the Minds came on however I began to shift my attitude to the place and to the gig. The light show was improved several notches, the volume was turned up, and the, yes, stadium sound of the band worked well in this environment. Their opener, “Waterfront”, was very tight and was just the kind of sonic boost needed to get everyone in the mood. There was not an empty seat in the place and you had to admire the crown-pulling power of a band that for far more than two decades have abandoned a strong showing in the singles and albums charts. As Jim and the boys cranked out a pretty broad selection from their back catalogue, the audience genuinely seemed to come together as one (aside from those perpetually off to the bar n’ bogs). “Promised You a Miracle” reminded me of how cleverly the band combined the synth pop of that era with rock swagger. Mr Kerr still has a fair amount of the latter, and from where I was sitting at least (aided by glasses) liked fit and healthy and moved in a pretty sprightly fashion for a man of 54. “Someone Somewhere in Summertime”, new to me, was another standout performance on the night. 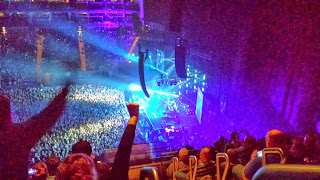 However, if truth be told, we were really only there for one thing and for one thing only. To hear “Don’t You Forget About Me” as a belated but highly appropriate epitaph to a lost brother in law, brother, and son, respectively. It had been his favourite and was played to the many, many mourners at the funeral. We had wanted to hear a mass crowd sing it, and sing it at the O2 they duly did. We stood up, arm in arm, and sang along to an anthem that has recently taken on a very personal resonance. My objectivity was out of the window, but who’s isn’t at any time?

The band followed the high passion of that number with a much more subtle and sober, but still emotional, song, “Let It All Come Down”, which captured perfectly our mood and, I think, that of many present. Convenience led us to depart during the first encore as “Alive and Kicking” was very much affirming that both the band and us are. The Minds apparently closed with a medley that took in covers of “Take Me To The River” and “Gloria”.

I am still not sold on rock stadia, but the O2 does it well, and Simple Minds did it very well on the night. I guess we have all come a long way since the mid-80s.
Posted by Neil Partrick at 5:43 PM

Good critique Neil, so glad that 'Don't you forget about me' delivered on the emotional tribute front. Good stuff xxxxxxx

It was amazing. Great performances all round including from us. Simple Minds were always a good live band. U forgot to give ultravox credit for 'dancing (with tears in my eyes). Weird for me to relive the 80s in this way.

Many thanks to Vanessa and to Ms Strikes Back. You're wright about Ultravox deserving more credit. Good ol' Midge.

Great review Neil...I'm never sure about the O2 either, It's basically a barn. We saw Leonard Cohen there and he thanked the audience for gathering on 'just the other side of intimacy'. and I have to admit to feeling an urge to batter the twats who were so consumed with alcohol addiction that they had to disturb my religious experience in order to get themselves another pint of pissy lager.
As you know I was certainly never a fan of the Vox or the Minds and still feel a minor pang of guilt about the aforementioned fiery sacrifice but I'm sure that the passage of time would have softened even my hard anti-stadium rock heart. I'm glad and very sad that 'Don't You Forget About Me' proved to be so poignant.

All that said, I probably would have been squawking along to Vienna with everyone else!

Many thanks to Mr Moosedog too for his evocative reminiscences of the O2 and other misdemeanors.

Really liked the Simple Minds/Ultravox review. 'New Gold Dream' is my favourite album by them and a song you refer to - 'Someone, Somewhere in Summertime' is on it.