Our "Magical Mystery Tour" was hosted by Holly Johnson’s kid brother, Jay. He suggested that we kick off with some Frankie tunes. We thought that would be fab, falling for the famous Scouse humour. This tourist coach trip could have simply been a mindless milking of the sites memorialised by the Beatles to an endless accompaniment of their sometimes over familiar tunes. Yet Jay Johnson’s humour and knowledge, and our felt connection with at least some parts of the four lads’ back-story, turned the experience into something quite unexpected and, well, magical.

We visited George's two up two down terraced house (see pic below), glimpsed Ringo's place in Toxteth due for demolition along with 400 others, saw Paul's up-market council house run by the National Trust, and marvelled at just how smart and suburban John's home for 17 years actually was. Aunt Mimmie’s middle class mock Tudor pile was brilliantly introduced by Jay after he played a few bars of Lennon’s “Working Class Hero”. Jay’s was a well-honed act. We told him afterwards that he should have stuck on “Two Tribes”. That would be sackable offence, he said, not in jest. 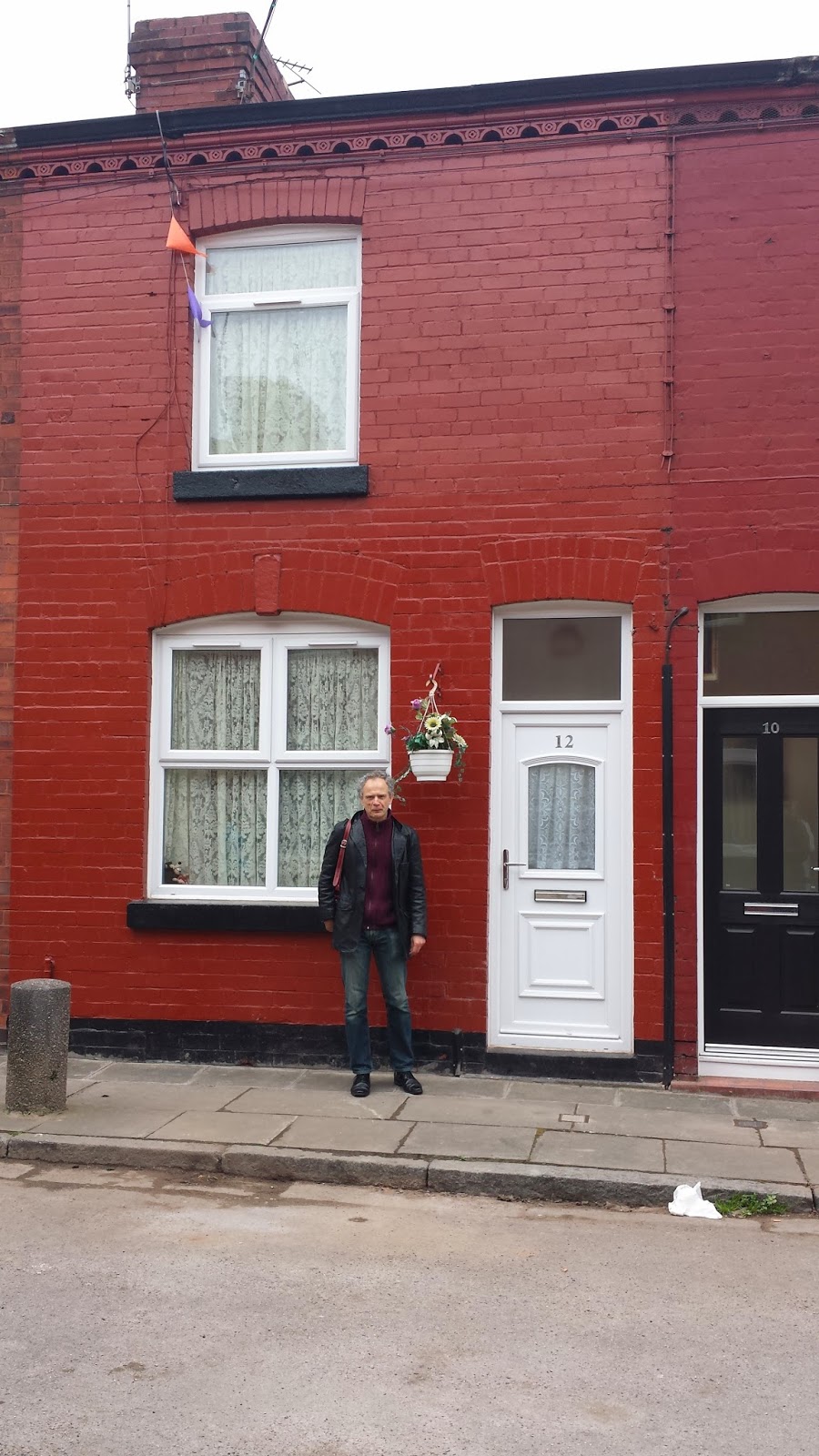 The coach tour had been much more than a Beatles’ nostalgia trip. The gulf between the image and the actual home life of John, the most socially conscious member of the Beatles, was a sociological trip in itself, as was the sight of the boarded-up houses of Ringo’s manor. They have apparently stood in that condition for 15 years as the council dithers over what to do with the only one that they consider has heritage (and potential monetary) value, and believes it cheaper to destroy the rest and build new ones but lacks the funds to do it. Ringo used his local boozer, which still stands at the end of his old street, on the cover of a solo album, "Sentimental Journey", inserting family members into the windows.

As the bus pulled away we heard a snatch of Ringo's cover of the Doris Day song performed in his inimitable tone deaf fashion. Ringo hasn't found enough spare cash to even save his former home, let alone the rest of the area that he was once so sentimental about. Why not fund a tax-deductable refurbishment of the 400 plus homes and hand it over to a housing association, Mr Starkey?

Mathew Street’s Cavern Club is the premier pilgrimage site for many of course. Yet, try as the publicity does to convince you that this is more or less the real thing, it does not succeed, despite being a similarly brick built subterranean venue. Located a few doors down from the original, whose entrance is marked by a life-sized photographic replica, it claims to stand on 75% of the original site and to have been built using many of the original bricks. This is perhaps true in the dryly technical sense, but not even the various displays and the wee stage on which acts perform can quite give it the air of authenticity.

Strangely the Cavern Pub over the road, a fairly recently opened enterprise owned by the same company that owns the club and the Magical Mystery Tours, was a more satisfactory experience. It isn’t pretending to be something it wasn’t, has more interesting displays, and, on the night we visited, the advantage of a first class Beatles tribute act, Two of Us. This sibling duo have so imbibed their John and Paul shtick that they do it as a kind of method act, sounding a lot like, and even looking a bit like, their respective icons, albeit carrying rather more weight than appropriate for a couple of mop-tops (see pic of "John" below). Their version of “Don’t Let Me Down”, performed, like all their Beatles’ covers, to the accompaniment of  just their two acoustic guitars, was a tour de force. And I don’t normally like cover bands. 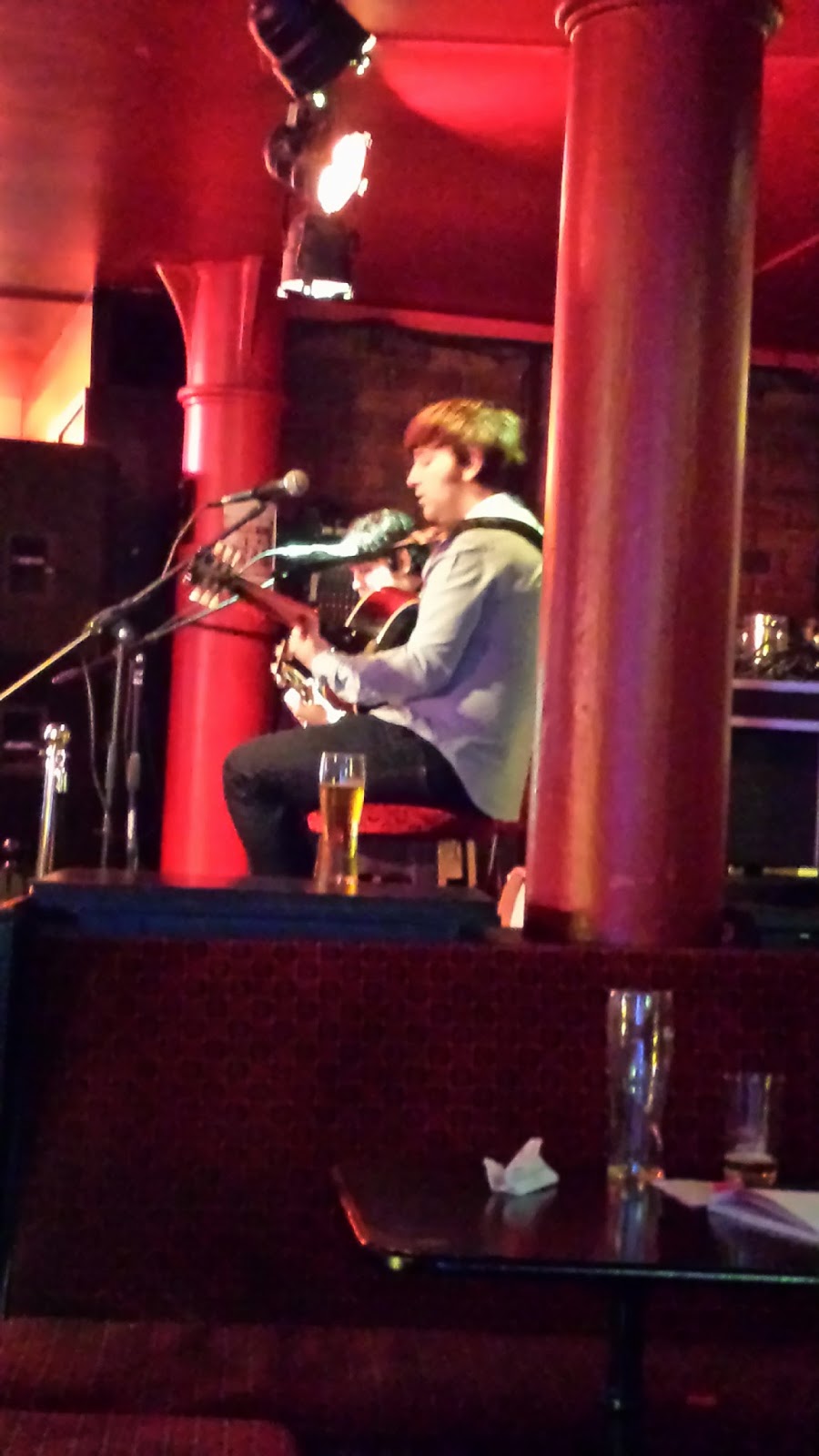 At the corner of Mathew Street and Whitechapel is an enormous and rather hideous souvenir shop, unimaginatively entitled “The Hard Day’s Night Shop" (to go with the adjacent “Hard Day’s Night Hotel” (sic). The balding, surly looking, bloke behind the counter repeatedly drummed the counter with a pen in a manner bordering on malevolent. He didn’t manage even a grunt when I wished him good morning. Mind you, if you’re not a fan of the Beatles, or even if you are, working in a supermarket selling stuffed Blue Meanies and Ticket to Ride pencil sharpeners, with Beatles’ documentaries playing on endless loop, would almost inevitably render you pretty humourless.

Our hotel was the Britannia Adelphi. Now in its third incarnation and sharing its centenary with World War One, this is a magnificent building located in the very heart of Liverpool and a short stroll from the neo classical late Victorian glory of St George’s Hall. The splendour of some of the hotel rooms is though more fading than others. Our bathroom door had recently been shouldered. However this incredible hotel features superb sitting and conference rooms. When I return to Liverpool I am going to try and book the Sir Harold Wilson Suite, which the former PM and local MP used for constituency business. I don’t know which floor John’s mother Julia worked on as chambermaid.

The Metropolitan (Catholic) Cathedral – this city has two – was stunning. This ultra-modernist wonder was built in 1967, relying in part on local fund raising. The spire depicts a kind of medieval crown, while inside an enormous crown of thorns iron work hangs over the huge central altar. An imaginative use of stain glass in the spire and in several chapels is mesmerising. The Anglican cathedral on the other hand is a routine mock gothic affair dating back 70 odd years. These days it seems to function as a kind of kindergarten cum shopping centre. At least the catholics keep their money changers outside the temple. The two cathedrals face each other at opposite ends of Hope Street

On our final day we inevitably took the Ferry Cross the Mersey. Gerry Marsden (the song’s author and singer) was our tour guide on this occasion, albeit pre-recorded. I am quite a fan of the modest man whose Pacemakers (also managed by Brian Epstein) have two of the greatest pop performances of the 20th century to their name. Their version of “You’ll Never Walk Alone” is quite simply the definitive interpretation. Yet no “serious” pop or rock historian ever deems to give them much consideration. We sat on deck, drank in the sun and marvelled at the stories about the former resort of New Brighton and admired the £27bn development at Seaport – a container port and wind farm just down from the city. The latter was a reminder of how this city was once and could yet be again a strategically vital trading hub – the gateway to America, as Gerry called it. As the legend has it, local bands in the 1950s got their hands on US blues and rock n roll records weeks before Londoners as they sourced them straight off the inbound ships.

Only half a million people live in Liverpool, and it is a relatively compact and therefore quite handlable city. Yet it has over 2000 buildings deemed to be of historic interest, a contributory factor in UNESCO declaring it a city of world heritage in 2008, placing it alongside the Taj Mahal and the Pyramids. Even just at the pop level there is much more to it than the Beatles (or Frankie). Measured by the number of No 1 hit singles it is apparently the most successful city in the world. Its other big name acts are depicted on an Albert Dock sculpture, part of a huge and actually quite tasteful renovation scheme that began after the 1980s riots (take a bow Mr Heseltine). Their names can also be glimpsed alongside non Liverpudlian artists and writers named in stone on the entrance to the beautiful central library.

There was so much more that we never had time to see. A return trip is very much in order.
Posted by Neil Partrick at 9:01 PM

Did you think urine luck when you came across the wee stage?

the pub over the road was a more pants-wetting experience

Mars bars and a bag of weed for the Stones tour then?

No mention of the Liver Birds? Tut tut :-)

I would quite like a stuffed Blue Meanie....or is that just me?

Thanks for all the totally gear responses (like, fab yeah)

I read your blog post yesterday! Sounds like you saw New Brighton from the ferry, which is Wirral of course. I haven't seen Birkenhead in years though.
I'd agree with you on Albert Dock; I remember when that was being built!
They did a decent job on it; Good Morning (that show with Richard and Judy) used to be filmed there, and a few lads from school had their work experience in the studios.
Regarding Liverpool, my mates used to go to the (new) Cavern for dancing and the like; shame I never made it. I was an idiot and instead went to Cream, which was a horrendous club. Well, that and stay on the Wirral.....
Anyhow, keep on posting!!!