Yellowmen raise the roof in Crowhurst

‘Raising the Roof’ was a late October musical celebration in a Sussex village in aid of the Yellowmen of Kadongdong. Loosely a folk night, it was a joyous and mostly very entertaining evening.

The standard of performance was initially quite varied, but the second half was almost faultless, and this in a village hall in the south of England. A world away from the UKIP froth at nearby coastal towns, the cause was to aid local men bringing relief to a part of Kenya where death from diarrhoea is not uncommon. The performers were a mix of folk-based musicians, solo singers, performance poets, an Andrew Sisters-style act, and a relatively youthful rock cabaret act with attitude. Two threads ran through the evening: retired teacher Chris Fisher and members of the family Moses: Brian and his daughter Karen.

Chris, MC and the evening’s co-organiser with Brian, is possessed of an impressive traditional singing voice; Carthy-esque but not derivative. Brian opened proceedings with a spoken tale of winter gloom before Chris joined in, walking from the back of the hall while singing an acapella version of the traditional ‘January Man’. 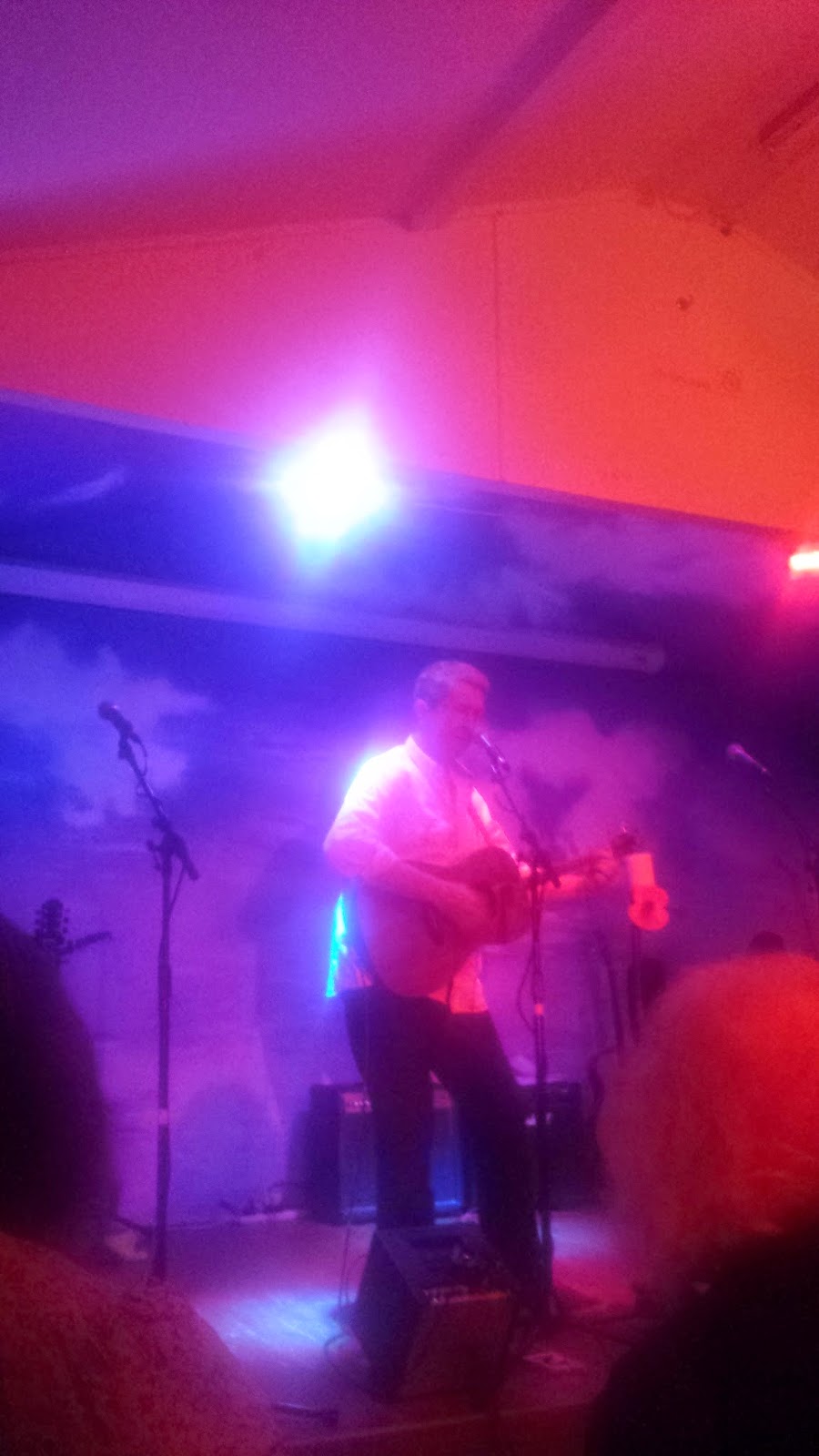 The next act, Robson, a self-styled exile from Northumbria, sported a white jacket and shades and looked like a cross between Roy Orbison and Los Lobos, but was sadly possessed of the vocal charms of neither. He also fell guilty to the mistake of many an intimate, unplugged type event, whether in village or city centre: too much between song schpiel. When he lifted his singing focus beyond the childlike to a reworking of ‘Raggle Taggle Gypsy’, things improved no end.

Next up was a bit of a surprise. ‘JC and the All-Stars’ were fronted by a young man with real rock star swagger, a Liam Gallagher stance, and Ryan Gosling looks. Unfortunately it soon became rock star stagger as his back pocket quart of Scotch dominated more than his stage act, and a voice relatively well attuned to doing an Oasis cover struggled with (the perhaps inevitable) ‘Whisky in The Jar’. The band, led by Mark Cole, played well enough, with some nice lead guitar touches by ‘JC’ (Joshua Cole). Follow that. 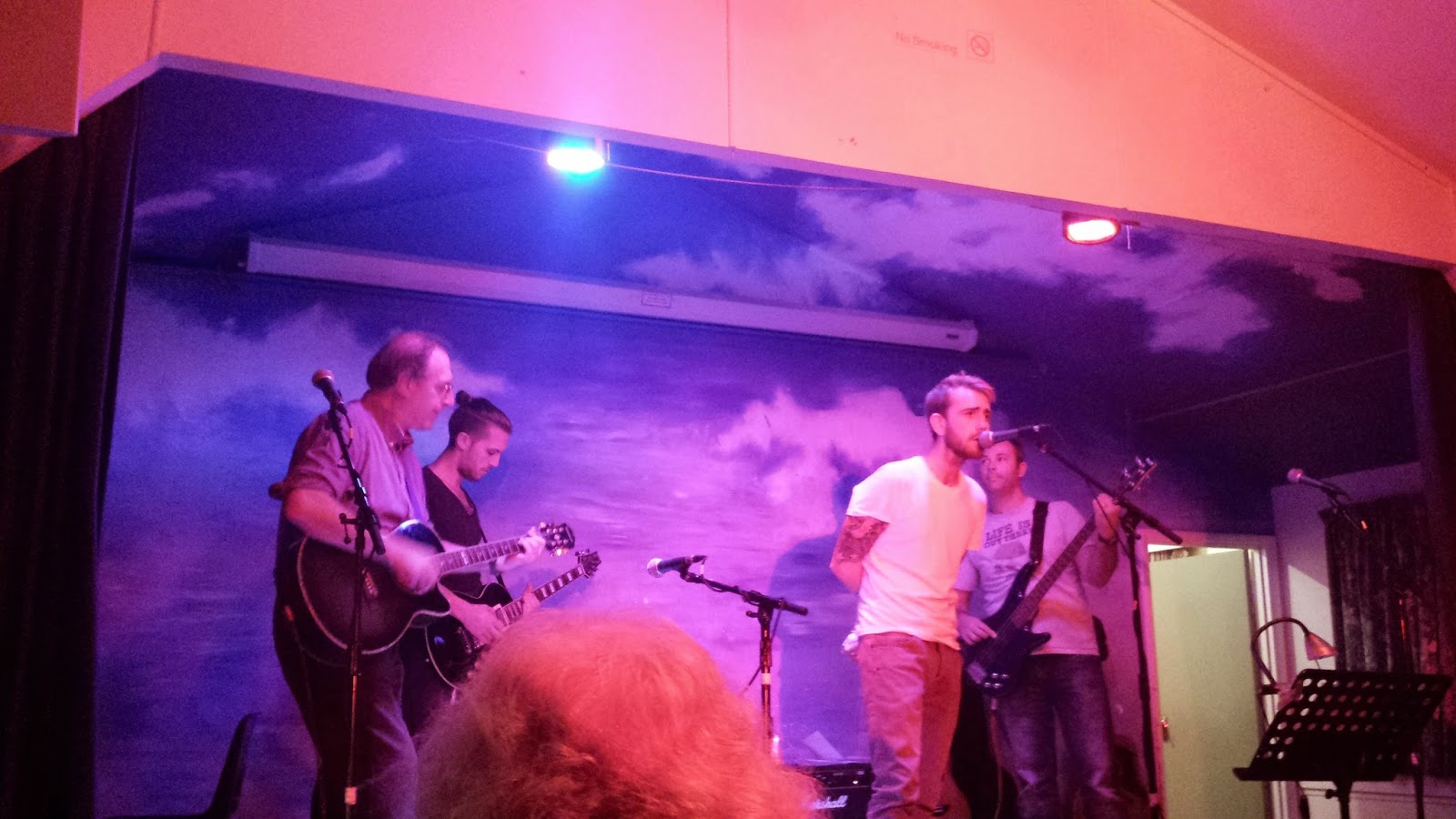 Well, Roger Stevens, doing a comedy set, certainly did. I don’t know if he writes his own jokes, but every one was a winner, and I’d had less than a pint of a very local brew at this point. Most are unrepeatable here, but suffice it to say that gags about onanism are still funny.

Dave Roberts was billed as an ‘Old Hippy Sings Old Hippy Songs’. He did what it said on the tin, and he did it very well. ‘All Along the Watchtower’ was not just a straight cover, and its climax, segueing into the last line of ‘Stairway to Heaven’, was a hilarious exercise in self-deprecation. He was followed by a tasteful and highly accomplished instrumental acoustic guitar set performed by Fionn Johnson, not bad for a 13 year old.

Among the stand-out performances of the second half were Steve Royston, whose ‘Play for England’  juxtaposed British men serving in Afghanistan with millionaire footballers whose patriotic duty and failings usually preoccupies the nation more. Chris Fisher’s take on a Ralph McTell song was performed with a large remembrance candle and poppy as a prop. His performance likewise successfully trod a careful line between necessary scepticism and undue cynicism.

The Victory Sisters were performing their wartime favourites routine for the first time ever. They have fine voices and definitely looked the part. Their set finished with ‘White Cliffs of Dover’; some of its more idealistic lyrics somehow sounding more ironic than ever amidst the political notes others were striking. 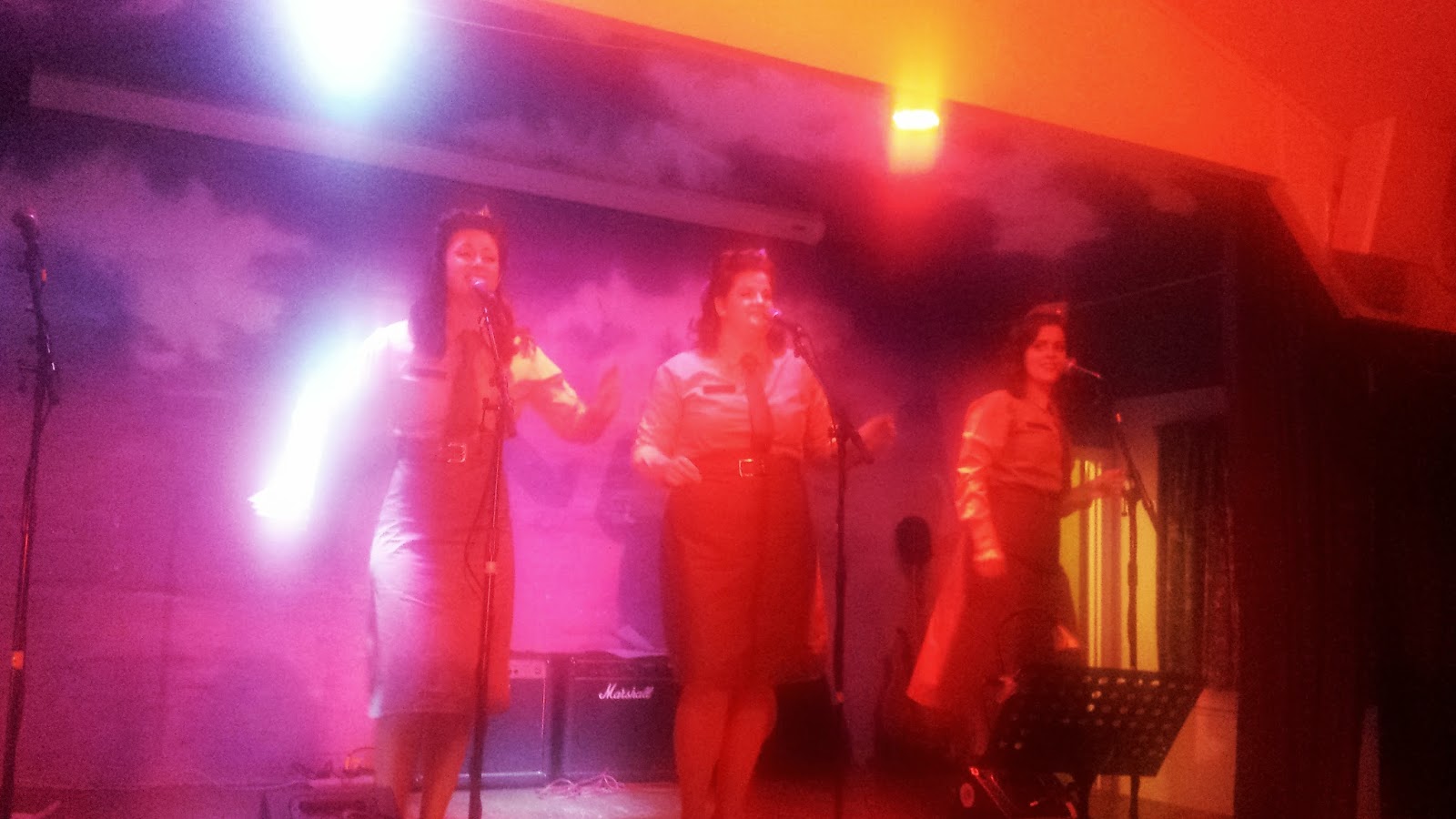 Brian Moses has the style and air of one of the Liverpool Poets. His almost aggressive telling of the kind of name he wished his street was called– Paradise Lane not Meadow Road - was powerful and funny. Roger Stevens then returned with Victory Sister Karen Moses to help him out on vocals. The Crowhurst News gave me the impression that he might be singing with the pulp fiction writer and husband of a Blair babe, Ken Follett, and the black Tory activist and ‘Play Away’ presenter, Floella Benjamin. Now they would make for an interesting duo.

The Collins boys, father and son, did one of the greatest versions of ‘Mr Tambourine Man’ I have ever heard – a very smart accompaniment to the passing round of Al Collins’ Bob Dylan hat to raise extra funds for the Yellowmen. Son Rory was less inspiring on his own as he, by his own admission, went for the lowest common denominator and regaled us, albeit in fine voice, with some sing-along Beatles’ and Kinks’ tunes. 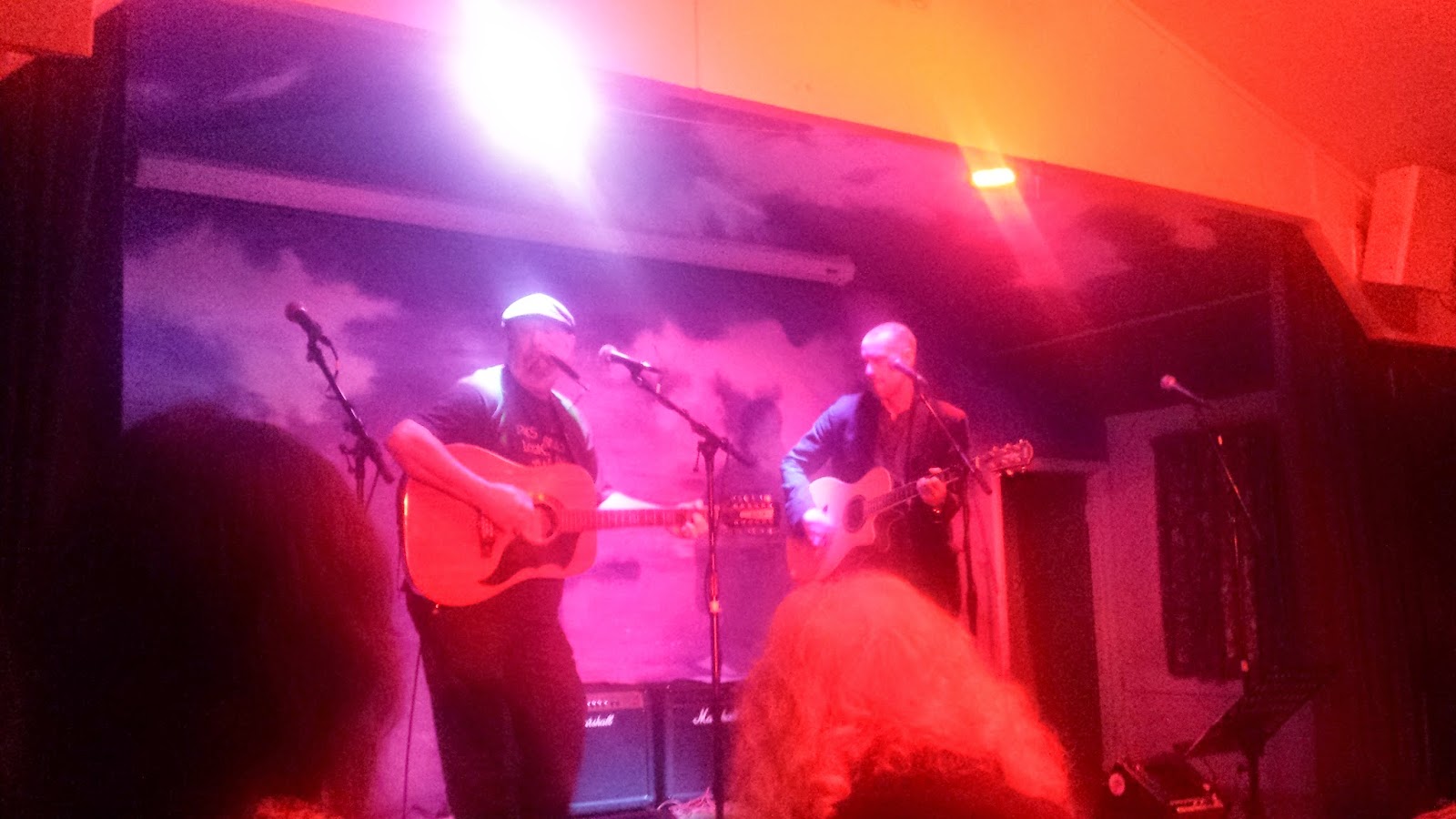 Many of the performers were then brought out for one last time as Chris Fisher led them in finale that featured a funny take on the ol’ Macca standard, ‘Mull of Kintyre’; and, more stirringly, the Shire Horses’ ‘Sit You Down’. A very moving end to an excellent evening. 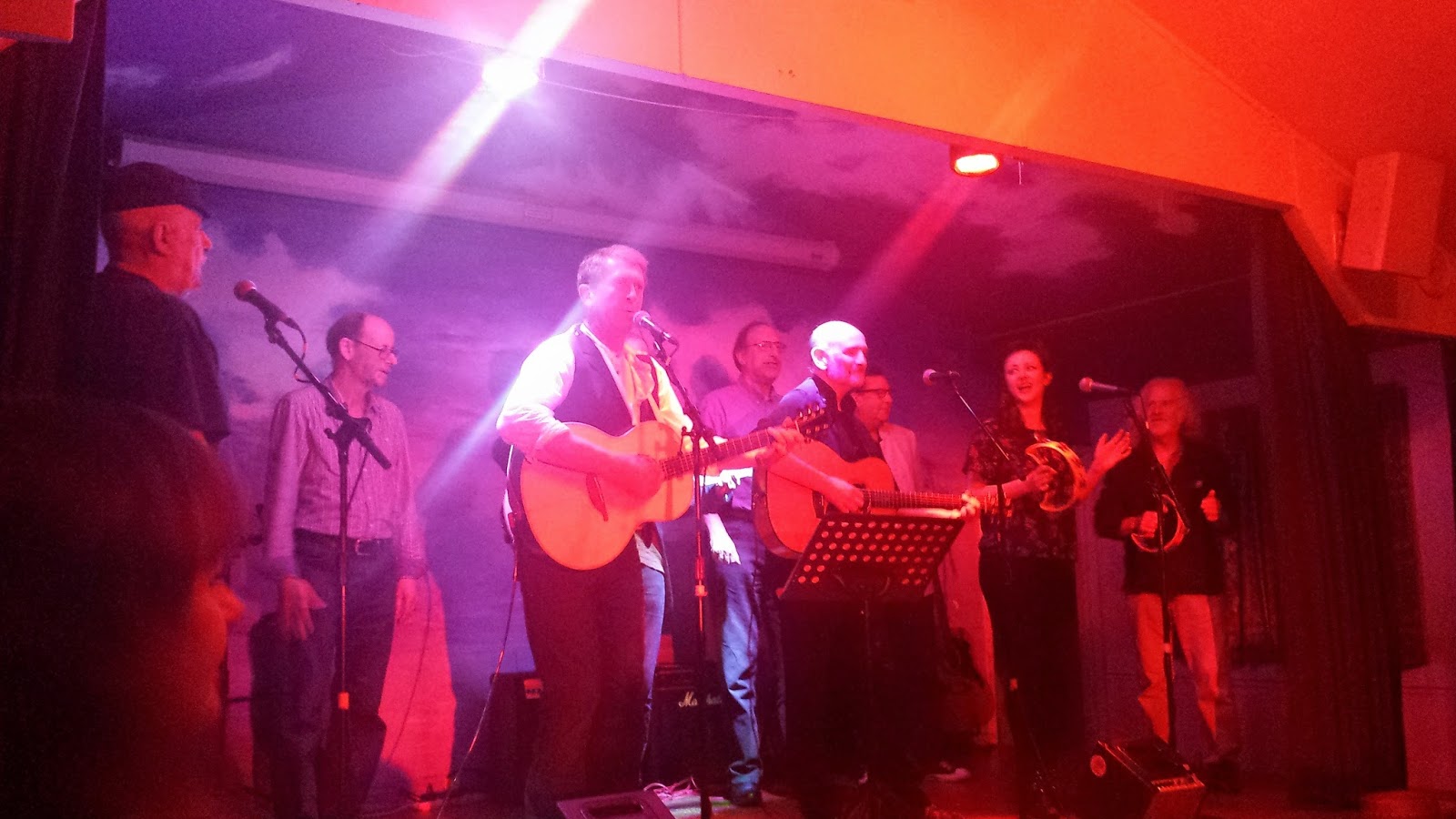 Posted by Neil Partrick at 1:01 PM

Good account of a very diverse and enjoyable evening. Agree that 'All along the Watchtower' was a highlight and was great to hear so much truly original material too. Steve Royston's song about Afghanistan in particular. Loved the folk, the jokes and the constant musical and lyrical surprises. Shame we have to wait two years for another one :)

Many thanks Ms Strikesback. Perhaps i was a bit hard on Robson as a fellow punter pointed out. All gave up their time for the cause after all.

Yes how can you be so mean about a guy who looks even a bit like Roy Orbison???

You're right, but as I also said, "Raggle Taggle Gypsies" was great, in fact it was really good. Sorry Robson, especially as your accent and name made me think of a hero of mine - and I don't even like football that much....