Hastings Friendship Group is the brainchild of Trevor Webb, who, together with fellow local Labour councillor, Nigel Sinden, and other supporters, puts on fund-raising music events for charity. In doing so they draw on a welter of local musical talent. This week’s very worthwhile cause was the Bohemia Counselling Centre, which for 21 years has, by word of mouth, brought together therapists and those in need of help. It’s very much in that cooperative spirit that musicians and enthusiasts gathered at the excellent Armenian restaurant and wine bar, Café Relax on Marine Court, St Leonard's on Sunday evening. 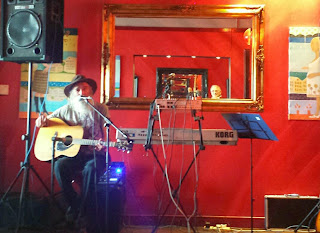 First up was Jack Apps, a grizzled singer of “nobody else’s songs”; a fact that he underlined mid-set and in conversation afterwards. Jack is a comic too, but when he told me he had been waiting 40 years to be an oversight sensation, it was partly said in earnest. His gag routine, to which I was treated to a personal performance, took me into an imagined alternative Royal Command Performance at which there “isn’t a dry seat in the house” and he has the audience “rolling in the aisles” (gedditt?!!?). More poignant was his opening song, ‘Love The Person Inside’. Perhaps you can’t properly love someone if you don’t love yourself, or if your feelings for another are only skin deep. 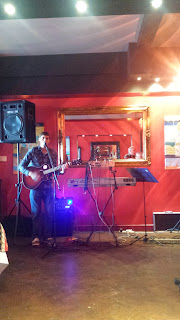 Next up was someone from the other end of the age spectrum. Tom Cole is a man who plays covers, but does so very tenderly. He also performed what sounded like an original, and impressive, take on the gospel and blues standard, ‘In My Time of Dying’, stripping it back to its roots in a refreshing rejection of the Led Zeppelin bluster with which it became associated in the 1970s. Bravest performer at the gig perhaps was acoustic guitarist and singer John Bushbridge. He began hesitantly but gained in confidence with each song. Covering ‘Nights in White Satin’ is no walk in the park.

Paul Crimin has a good voice and performed some interesting material. I may never know what the song was that he said he had never performed before as he, sadly, couldn’t pull it off on the night. Bashfully, he said he should have saved that one for the bedroom.

After what had been a stream of acoustic guitar playing singers, a change in pace and style was welcome. Dan Wahnon and Nina Nicola blended contemporary RnB, pop and rock; at one point in the very same song when they fused Rihanna's ‘We Found Love (in a Hopeless Place)’ and White Stripes' ‘7 Nation Army’. Nina had the voice to carry it off and, as she put it, to wake us up (and drown out some of the less considerate punters). 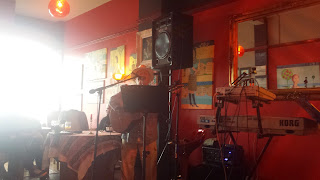 I chatted with guitarist John Hobden later. He is a mere 80 years of age, first picked up the instrument at the tender age of 73, and first performed in public just 18 months ago. I hope to see him play on another occasion.

The band that helped make the whole evening possible were a three-man Latvian act: singer, keyboardist and electric guitarist, Midnight Cats. The keyboard player doubled up as sound man. The Cats were a little slick for my taste, but their professionalism went down very well on the night.

The fine-voiced Pete Williams, a veteran of these events, performed toward the end of the evening, including a sweet version of 'Streets of London'. Sadly though, I missed Paul Crimin returning to the stage to sing an emotional version of a highly emotional song, 'The Green Fields of France', which recalls the horrors and, for many, pointlessness of World War One. He sung it in honour of Jeremy Birch, the much lamented local Labour leader who was a great supporter of HFG and who, at only 63 years of age, died very suddenly just over three weeks ago. Jeremy had helped Paul, mid-performance at an HFG gig, to remember the words of 'Waltzing Matilda', a song whose original lyrics are famously critical of the WW1 battle of Gallipoli. 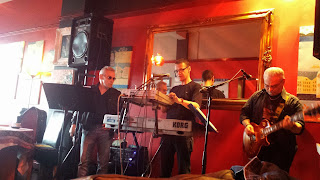