The Stag in Hastings hosts a Jack in The Green jam 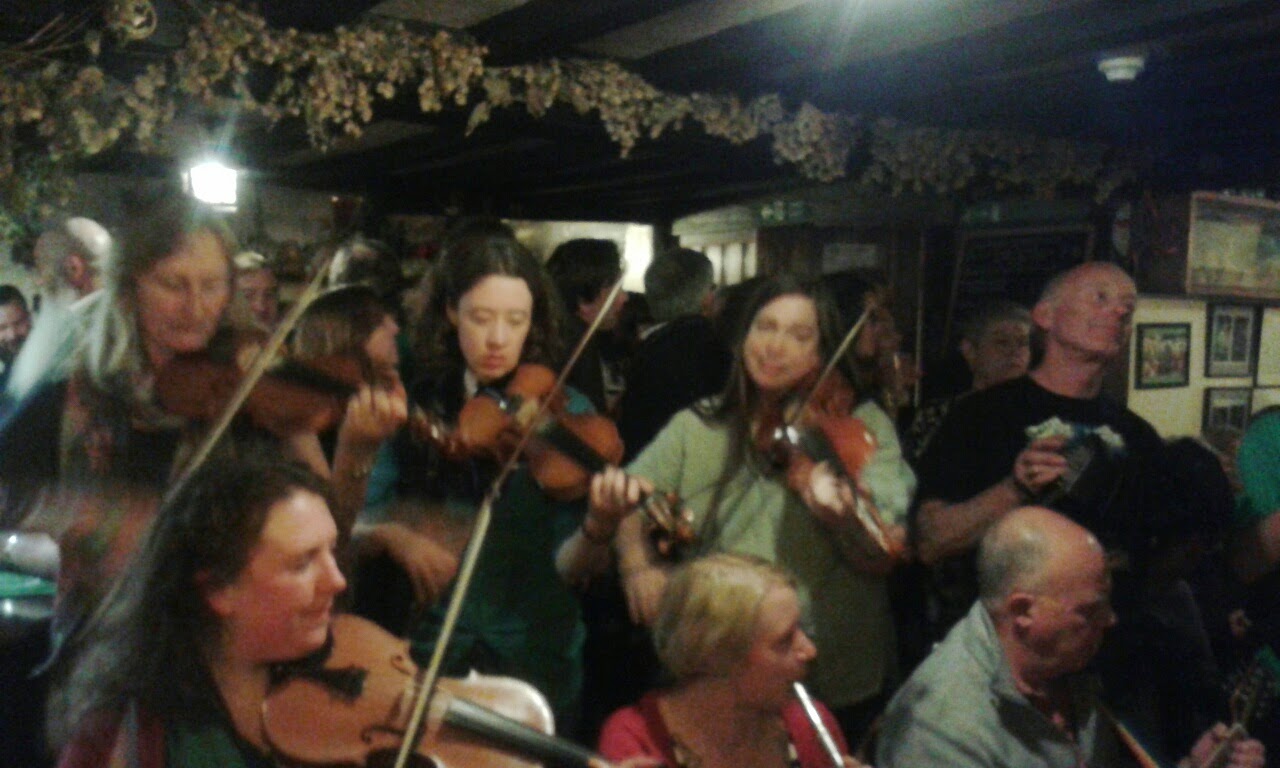 This was the scene in The Stag Inn, a beguiling ale house in Old Town, Hastings on the first night of the Jack in the Green Festival. We arrived early and supped pints before the musicians arrived. A serial monologist was regaling the barman with tales of his indispensable part in folk and rock history.

We were seated at the musicians' table, so made our excuses when a female mandolin player dressed as an orange dragonfly arrived. On the next table a bodhran player and singer from Eastbourne was modest about his own abilities, but full of tales of the skill and wonder of other musicians. He also told us of the legendary Jewish storyteller Shonaleigh who still treads the boards, the last of a long line of Drut’sylas. I felt like part imposter, part musical groupie; though in conversation I could nod in the right place and had conducted my first pilgrimage to Sidmouth Folk Festival when I was 17. 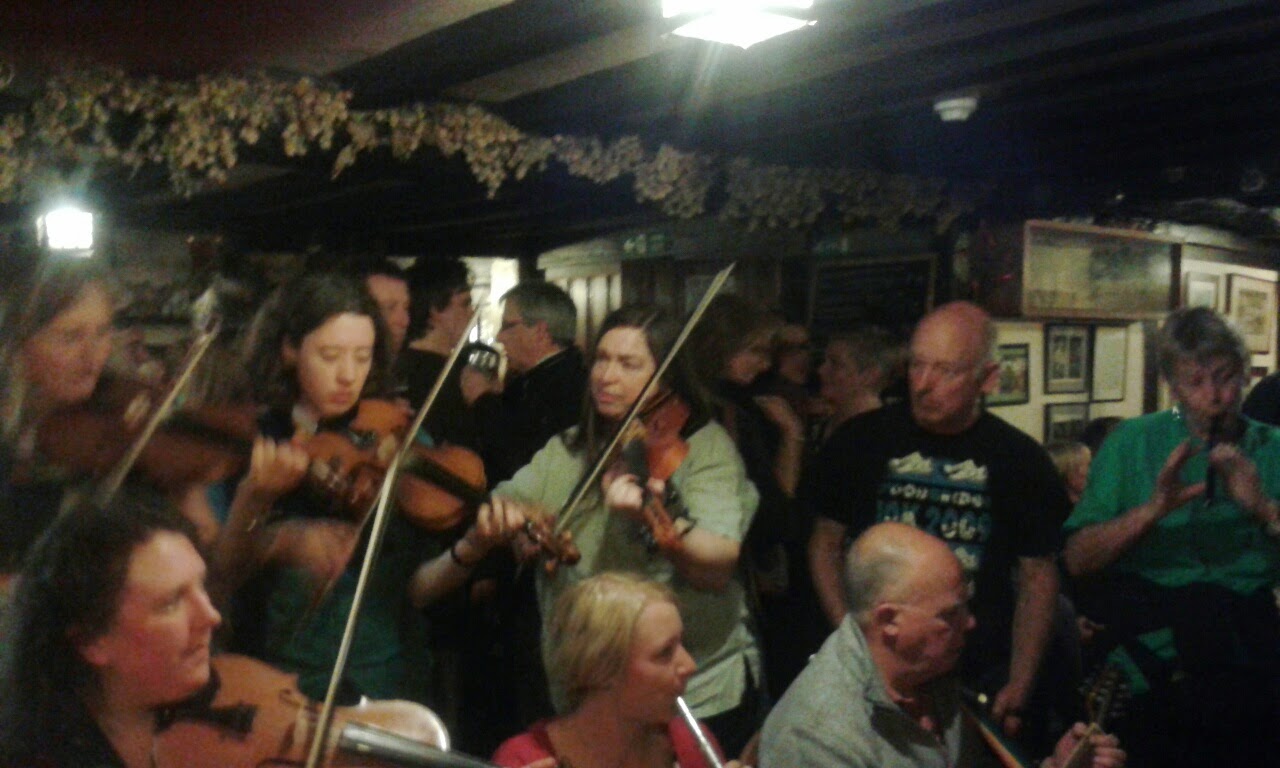 Within half an hour the pub was rammed. Mandolin, banjo and penny whistles were soon outnumbered by female fiddlers and male melodeon players. The fiddlers in particular kept up a furious pace, periodically accompanied by unaccompanied singers whose songs drifted in like waves from a distant shore, but actually just the other corner of the packed pub.

"Thatcher's Heritage" flowed. As the aptly named cider slipped down all too easily, I got a flashback to Sidmouth in the early 1980s. It being an election, memories of the politics of that time passed through my increasingly addled brain as one singer told tales of workers by hand or by brain getting the shaft from the man. I thought I saw Michael Foot enter the pub disguised as a banjo player, quickly followed by the ghost of Pete Seeger. I wondered who would hold the audience for longer. 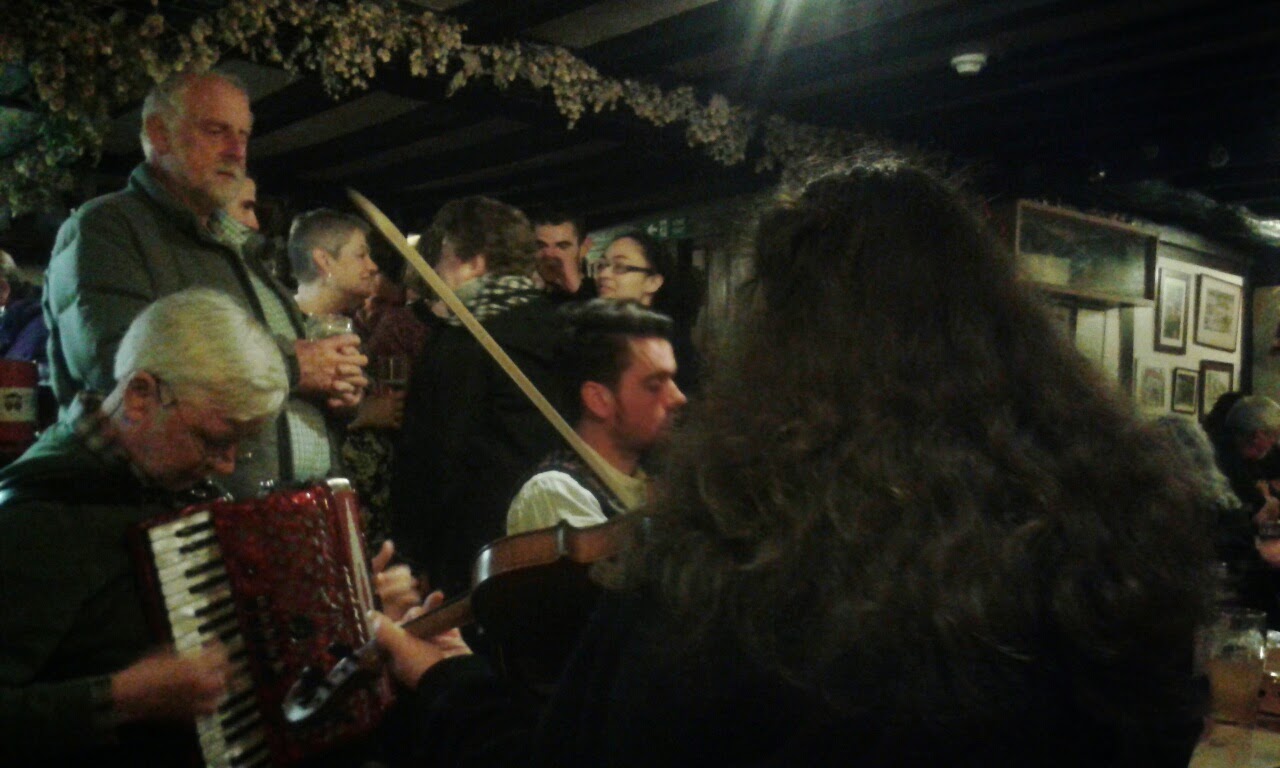 We were seated next to the musicians. Storytellers gathered there too, although the boozy musical revelry wasn't quite suitable for a performance by them tonight. The bodhran man gave us all a story in song though, unsteady at first but he soon rose to the occasion. Regardless of the Festival, The Stag Inn often has music on. No frills, no hierarchy, just people playing their heart out.

Posted by Neil Partrick at 8:26 PM