Councillor Trevor Webb, a veritable musical impresario in his spare time, runs the Hastings Friendship Group (HFG). He delights in giving a platform to local musical talent. Especially, he says, if they’re young, old, or female (or maybe two of the three, but you don’t have to be any of these things).

The latest HFG benefit gig was held on Wednesday night at Gecko’s, the St Leonard’s seafront bar and eatery. The cause this time was the Hastings Inter-Faith Forum (HIF). HIF brings together the diverse traditions of the area in dialogue and mutual support, and its head was present to thank people for their backing (otherwise known as throwing money into a bucket).

Trevor’s line-up this week included singer and guitarist Joanna Turner who, after a nervous start, soon found her feet and impressed with her vocal delivery. She showcased some of her own songs as well as a few pop/RnB covers. 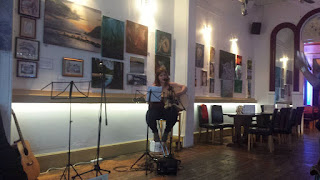 Joanna was followed by Dave Williams. Dave was likewise armed with just an acoustic guitar and, also like Joanne, hasn’t played that many gigs before. Dave told me beforehand that his live performances are normally confined to Church. He bravely opted to tackle some rock classics. These included The Who’s ‘Won’t Get Fooled Again’. (As Dave played I kept wondering which Labour leadership candidate would be the most appropriate target for Pete Townsend’s lyrical attack on would-be political bosses masquerading as those who would deliver radical change). 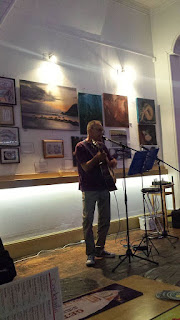 For my money Dave’s best moment was saved ‘til last when he brought out his ukulele and sung Sting’s ‘Fields of Gold’.

Tony Peek performed only his own songs, including ‘Bottle Alley’, a number that formed part of a Hastings musical that once toured the country. The song movingly references a renowned Hastings street to tell of past and present suffering. Tony was at his best when his barbed lyrics focused on such social observations. By contrast, I found some of his overtly political lyrics a bit jarring. Tony has a very distinct, and appealing, singing style. It reminded me a little of a solo Syd Barrett minus the astral subject matter. 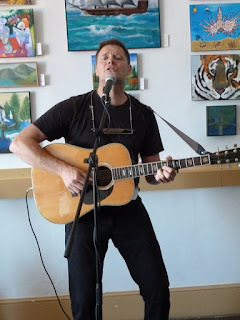 Michael Stoggewl’s wife told me that her husband has been drumming for many years, but that his musical partner on the night, Eric Harmer, hadn’t sung in public before. Eric, who is retired, clarified that in fact he had played in public three times already! For me Eric and Michael were the best performers of the evening. Unassuming but effective. Eric’s almost scratchy sounding acoustic guitar gelled with Mike knocking out the rhythm on an amplified empty wooden speaker cabinet. 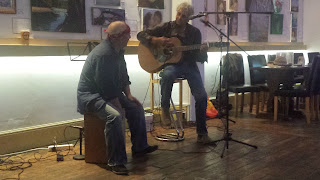 Opening up with ‘Riders on the Storm’, if you can pull it off, is always a good move. ‘Whatcha Gonna Do About It?’ (the Small Faces’ song of that name, I think) concluded their set. As he took the stage, Eric observed that a few drinks were needed in preparation. Well, it didn’t show, other than perhaps to encourage a pleasingly relaxed vibe. Paul Crimin then treated us to some early Beatles’ LP tracks, including ‘No Reply’ and ‘This Boy’. And very good he was too.

I had to depart to the wilds of Crowhurst before Vincent Turner, the headline act, took the stage. I understand he went down well, despite being a little nervous. Apologies to Vincent. My loss not yours.

Posted by Neil Partrick at 6:20 PM

Thank you for the write up Neil. Very good to hear from you and glad you enjoyed the evening.

It's really nice that you take the time to do this.

Cheers Tony, my pleasure and thanks for your performance and for responding like this.