The Rockitmen hit Crowhurst last Friday night with a storming set that had half the village dancing. These guys could play anything, at least if it loosely fitted within the pop canon. Urban, RnB (in all senses), rock, soul. You name it, these (not so young) boys could do it. They make no bones about what they do either. It’s emblazoned on the banner behind them. “Professional functions party band” goes the no-nonsense description. They are cabaret and proud. Their website says they’ve backed The Real Thing, Cutting Crew and Andy Bell of Erasure. So no slouches then. 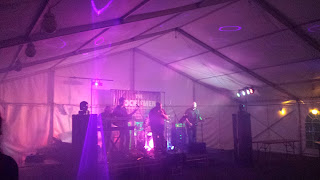 Sam Smith’s ‘Stay With Me’, the multi-million-selling piece of pseudo gospel that normally induces nausea in me, was sung with real feeling by the front man. Perhaps it helps being 40+ (to this particular 50+ person) if you’re trying to do plaintive, earnest and, yes, soulful.
The band can play too. The keyboardist has feel, the guitarist rocks; they give it their all. At one moment it was as if the marquee was fuelled by something other than the Pimms or Harvey’s on offer at the bar. The rush as they piled through a medley of ‘Disco Inferno’, ‘Papa was a Rollin’ Stone’ and ‘I Feel Love’ was something to behold. ‘Are you ready?’ the singer teased as the band were about to hit a particular high point of the Donner Summer/Giorgio Moroder classic and the floor erupted once again. 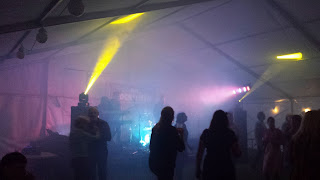 Something that got this obsessive’s goat however was when the front man introduced songs by UB40 or Madness as these bands’ material. It helps for punter accessibility I guess. However people should be reminded that the incomparable Labi Siffre wrote and first performed ‘It Must Be Love’, and that ‘Red, Red Wine’ became a reggae number before UB40 covered it and after Neil Diamond wrote it!
I sadly had to leave before the show ended way after midnight (!), although not before enjoying an inspired merging of ‘Twist and Shout’ and ‘La Bamba’.
If you’re getting married, divorced or planning a bar mitzvah, these are the boys for you.

Posted by Neil Partrick at 1:51 PM