“Will the Circle be Unbroken?” was the song of solidarity that folkies from another time and another place used to sing. This Hastings musical circle remains tight, thanks to the efforts of Councillors Trevor Webb and Nigel Sinden and many supporting performers.

“The Circle of Trust” is the name of Hastings Friendship Group’s second CD. (The first, "One Hastings Many Voices", was released earlier this year, and was reviewed on this blog). Showcasing a lot of local talent, "The Circle of Trust" has just been released and is dedicated to Maria Grazia, a sadly departed singer and songwriter who performed at HFG events. The new CD is raising money for Sudanese charities under “The Circle of Trust” moniker. Maria gets a heartfelt tribute at the close of the CD: “Goodnight Maria” is one of the best things I have heard Paul Crimin do. It’s his own song too.

The launch event was at the excellent (if a little pricey) "Relax" restaurant and bar at Marine Parade, on St Leonard's seafront on Sunday October 23. Listening to the CD, and reflecting on the live performances of many of those featuring on the album, there are some whose star inevitably shines brighter than others. There are also those who came across much better at the launch gig than on the CD, and vice versa. The most important thing about the CD though, aside from the good cause and giving a different platform to local artists, is that all the performers are playing original material that was either written by, or for them.

The CD’s producer (and writer of several of its songs) Nelson King (who also produced the first HFG CD) closed the evening. (I had to make my excuses before Nelson hit the stage, sadly). He and Wendy White’s number, “Follow Me” is a good cut on the CD, well produced by Nelson, albeit ending abruptly. His entirely self-penned song, “I Don’t Believe a Thing,” is also a strong feature on the disc.

Preceding him was a young woman who is fairly new to HFG events, Georgia Faye Steele. Georgia played electric piano and belted, and I mean belted, out some classics. Note to the organisers: this woman can sing…loud. Turn down the PA (a bit), or get her on earlier to wake up the bar (and the neighbourhood). 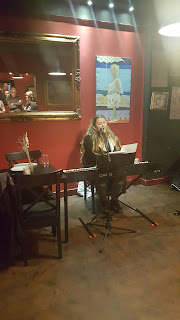 Her own song “Something New Just For Now” came across much more authentically than covering the folk (and very male) song, “House of the Rising Sun” (best known by The Animals), or, even more bizarrely, singing the Eagles’ “Hotel California”. Georgia is probably going places though.

Nick Warren is no stranger to HFG gigs. Unfortunately for him he had the graveyard slot as the closing acts beckoned. Nick had to make it fairly snappy at the end and barely got time for a well- deserved round of applause. Nick sings his own songs (as far as I can tell) and plays acoustic guitar with feeling. “Riptide” especially stood out. “Be My Baby One More Time” is the self-penned song he plays on the CD.

Tania Pieri was accompanied by Juliette on electric piano and backing vocals. Juliette told me afterwards that she hadn’t performed in public for 30 years. This gig was one of Tania’s first too. They did an excellent gospel cover, and another number had some tantalising lyrics including one that went along the lines of “it’s a good day, put away the pills” (unless my hearing problem is worse than I realise). 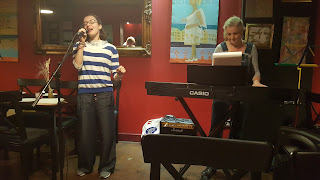 Tania’s own composition “Fire and Light” come across well live. On the CD Tania’s strength, like some other HFG performers, doesn’t register in the same way. However, live on a Sunday afternoon at Relax she and Juliette were probably the best act.

Katie Wren is just 16. She performed confidently and her own song, “Fairy Tales”, comes over well on CD too. (She also covered Train’s “Hey Soul Sister”, which has a riff that to my ears sounds a lot like Tracey Chapman’s song “Fast Car”.

It was a shame that Craig Devlin wasn’t there on the Sunday. His “Carry You Home” opens the CD and is one of its strongest cuts. Trevor told me before I had had a chance to check the CD out that Craig is the most authentically rock artist HFG currently have on their roster. He has an earthy, lived in voice to be sure. Yet another HFG person who either is or should be destined for greater things.
Mike Guy’s “Little Town Blues” is sadly under-produced on the CD, or just recorded at a lower volume than the rest of the tracks. It’s a shame because it grows on you, well it has on me. I had originally taken the lyrics for a non-ironic channeling of John Major appropriating George Orwell’s famous misty-eyed vision of England. "Little Town Blues" is in fact based on the lyrics of the "Dorset Gypsy Poet", Raymond A Wills. The clever and evocative lyrics work well with Mike's gently affecting tune. Mike also sung "Mr Bobby" by Manu Chao (a Bob Marley tribute) and his own, localised, take on Route 66, "A259".

Dave Williams’ “Dare I Believe” CD contribution is both professionally performed and produced. Live, Dave (see pic below) has matured as a performer. No longer, on this showing at least, tackling the rock behemoths. Aside from the above song given to him by Payen Bingley, he covered lower key numbers that suited his range and style. 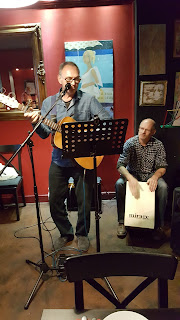 Pete Williams (no relative, see pic below) performed a blinding version of the Nelson King song "The River". This was great live and is equally great on CD. No small feat. It has that feel of an old folk/acoustic rock classic, as if it was a huge hit back in the day. Pete teamed up with his old musical sparring partner in Harry's Brother, Steve Avery, for a version of "The Weight" that (for me) was the best performance of the night. It was also the third best version of the song that I have ever heard (after The Band and the Staple Singers, naturally). 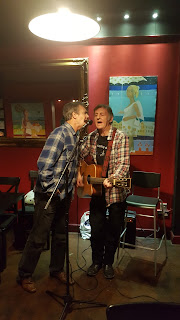 Sadly, Tom Cole was finishing his self-penned, and very catchy, CD contribution, “Long Way Home”, when I arrived. His voice is sounding more mid-Atlantic these days (as almost every English singer invariably does).


John Busbridge’s “Summer of 67” is certainly a whole lot better than the better known “Summer of 69”, and evokes that fabled time nicely. After the first summer we had Devaluation and, during the second, British troops went into Northern Ireland. “Sgt Pepper” versus “The Ballad of John n’ Yoko”. False dichotomy I know, and I digress. John’s tune is reminiscent of Robin Sarstead's “Where Do You Go to My Lovely” fused with Dylan's “My Back Pages”. Musically appropriate I guess. He also covered "The Ballad of Lucy Jordan". I hadn't realised it was originally performed by Dr Hook. To my mind it shall forever be Marianne Faithful's song. "At the age of 37, she realised she would never drive through Paris, in an open car, with the warm wind in her hair.." Oh yes.

On the CD, Maman Jay performs a number under the “Kids from 7 Streets” title. The 7 Streets project was launched by Trevor to bring help to homeless children. The song has a moving intro by one of Maman Jay’s grandchilden. It was written and, unlike all the other tracks, was produced by Abye Abdullah. Trevor tells me that Abye, like Maman Jay, originates from one of the French Indian Ocean islands.

Exclusive to the CD, Indian Dave is no Indian but he does a nice line in ethereal flute playing. Jazzi B (Jasmine Bollen) makes a solid contribution with  “Life”, a song written by Nelson King. Dan Wahnon tells us of trying to make it up in the smoke ("Hard Road Home") in a surprising foray into new wave circa 1977 (with Dan Duke providing electric guitar accompaniment). Oksana Kirjuskina is an HFG regular. Her impressive larynx does a nice turn on “Your Smile”, a song familiar to HFG regulars.

A word for the performers who didn’t make it to the CD this time and who played early on at the gig. Flashboy, otherwise known as Andy Ives, had the difficult task of singing while Kevin Sloan held his Tablet aloft as a lyric sheet. Flashboy's numbers included a cover of "Wasteland" (which I think is the song originally performed by 10 Years). 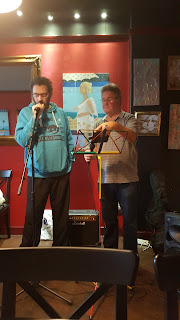 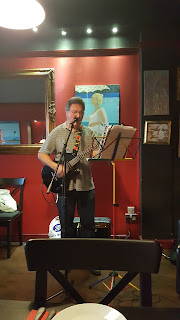 The Circle remains unbroken. Here’s to Trevor, Nigel and all the HFG crew. Buy the CD at Relax, Gecko’s and other reputable outlets.

Posted by Neil Partrick at 4:47 PM

Thank you Neil. A lot of hope go's into these CDs and we get a lot out of them. Hastings Friendship Group can only be a part of those that contribute and in that we have been lucky. All are welcome to our gigs and if you have a charity we can help or a new performer we can promote then Bring them on.

Many thanks to HFG chair, Nigel Sinden, for writing this comment. Much appreciated feedback, best regards Neil