The Jesus & Mary Chain played Bexhill more than three decades after they launched their career  by provoking a riot in a London squat. Last night the De La Warr Pavilion was taking no chances. The sedate Sussex town’s premier entertainment venue was awash with bulky bloke security operatives. Gauleiters confiscated plastic bottles from unsuspecting punters, unless, like me, they were armed with a fictitious “medical condition”.  Otherwise they were instructed to present a lottery ticket after the show in order to win back their offending pre-bought soft drinks or home-bottled tap water. You have to pay for water inside, one of the many walkie-talkied heavies informed me, as if the explanation made this particular practice of coercive capitalism any more acceptable, or legal given that bars and clubs are obliged to give customers tap water for free.

Before the sonic escapades of the JMC, a privileged-sounding, floppy haired young rock god by the name of Willow Robinson bored everyone shitless with his stupefyingly soulless appropriation of Free and country rock clichés. For once I understood why most gig-goers stay in the bar for the support act. Willow was accompanied by a Silent Bob-lookalike on bass, replete with sun-glasses and idiot hat, while an extra from the gym thumped the drums. I like the JMC, but if they signed-off on this public school, poodle-haired, ponce and his cod-rock posturing, not to mention a goon squad more suited to a UKIP rally, then they, and the DLWP, deserve a slap.

Jim and William Reid did their thing, backed by three other musicians and occasionally a female singer. Jim was typically, I guess, hard to see amidst a lighting arrangement suited to mystique and mind-bending. 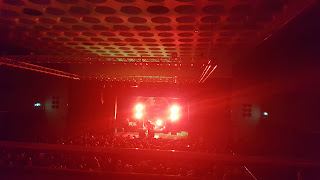 Their performance was at times as rocky as they actually became in the 1990s, but at others it almost reached the psych-goth transcendence of their early work. By definition this included excellent takes on ‘Some Candy Talking’ and ‘Just Like Honey’. In their second set – JMC don’t do encores – they totally kicked out the jams and took both new and old material to another level. They closed with what Jim said was a new song. Initially fairly normal by JMC standards, half-way through though they suddenly dropped down a few gears and the song morphed into a warped, feedback-heavy, slow-mo wig-out that decreased my heart rate by half. Amidst often intense red light and, I think, unintended, shadow projections (see pictures), the JMC had taken this punter on a trip, aided only by a plastic cup of Guinness. 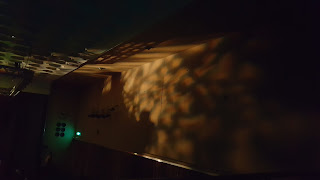 This is absolutely brilliant.It almost makes up for missing it. If only you could write this way in your day job!

If only. It's time to kick out the literary jams, mutha fuggerz.

I saw in the 90s. They were depressing but in a good way. Sounds like they haven't changed. Except for having security at the gig....In Bexhill? Anyway, well written and funny, Neil. Trish X

The best blog yet Neil. Saved me travelling to the only above ground cemetery in the Kingdom. JMC were always different, not through inventiveness, but through lack of talent. And bouncers in Bexhill? Were they expecting the dead to exit the bus shelters and create havoc?

Cheers Trish. Really appreciate your comments and impressed that you saw them 2 decades ago!

Really funny Pete. You should be writing the reviews. Much appreciated. Best Neil