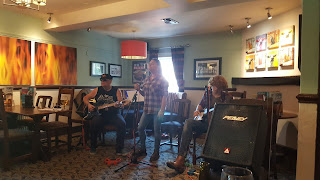 Folkstack Lightnin’ are a newly-formed electric folk and blues trio, specialising, as their name suggests, in English folk and American blues music. That in 2017 you can walk in to The Rodmill (Flaming Grill) pub in Eastbourne on a late Saturday afternoon, stumble down the opposite end from the football, and find singer Vanessa Grove, guitarist Kelvin Message and guitarist/singer Neil Grove performing songs as varied as ‘Hoochie Coochie Man’, ‘Dream A Little Dream’ and ‘The Lowlands of Holland’ is nothing short of incredible. These three are dedicated to their craft, preserving the best of what the British music scene has long discarded, affirming these songs’ value for the initiated, and, they hope, converting a few along the way.
While the electric guitar-led RnB standards they perform were once the standard fair of aspiring white boy blues-rock bands in Britain, these days they’re rarely heard in pubs that put on live music. Their interpretation of ‘Dust My Broom’ fell somewhere between the Robert Johnson original and the more renowned Elmore James' cover. On many of the blues numbers a great interplay often ensued between the old pro Kelvin on rhythm and the solo pyrotechnics of young guitar gunslinger Neil.

Neil’s vocal delivery is maturing too, even if the salaciousness of some of the old bluesmen’s lyrical preoccupations can jar a little. An up-tempo song like Muddy Waters’ ‘Satisfied’ totally cut through though, especially when it allowed the dueling boys to get almost funky on the instrumental parts.


Folkstack Lightnin’ also dusted off a few, more contemporary, folk-rock numbers: Jethro Tull’s ‘Mother Goose’, Horslips’ ‘Trouble with a Capital T’, and Fairport Convention’s sublime ‘Crazy Man Michael’. An unexpected, and impressive, jazz-inflected vocal detour occurred when they performed the 1920s song later covered by The Mamas and Papas, ‘Dream a Little Dream’. An inspired idea was to fuse Blind Willie McTell’s folk-blues take on ‘St James Infirmary’ with the jazz song, ‘Summertime’, performing the latter in a blues vein and with vocal duties passing from Neil to his Mum, Vanessa.

The traditional folk songs the trio performed are hardly ever heard outside of the few folk clubs left in the UK, and even there it is unlikely that you would find them sung with such passion. On these numbers Vanessa essentially takes over the show, with the boys providing a relatively gentle accompaniment to her stellar vocals. Among the performances that especially stood out were ‘All Things are Quite Silent’, ‘Sheep Dog, Black Crook’; ‘Ramblin’ Sailor’, ‘The Shearin’s Not For You’, and, the performance that nearly took my breath away, ‘The Lowlands of Holland’. This song has an illustrious pedigree, interpreted by Sandy Denny and Steeleye Span among others. Vanessa sung it with force and no less feeling. Its popular folk theme of being forever wedded to a lover killed in their prime was somehow injected with fresh vigour, before Vanessa militantly ripped into playing the spoons as the boys played the song out. The penultimate number, this could have ended the show. It certainly got the strongest response of the set, with some clapping even discernible from among those who’d only come in for the footie.

They finished their performance with ‘(What shall we do with a) Drunken Sailor’ in an effort to reach those parts of the pub that other, less familiar, songs cannot reach. Now, if they were closing their set at midnight with such a rousing number, just imagine the audience response then.


For my profile of musician and guitar tech Kelvin Message, click on this link
Posted by Neil Partrick at 9:00 AM