Dubai déjà vu all over again

I took the Dubai Metro for the first time, past hundreds of towers, many familiar, some not, standing proud like brazen priapic shrines to pure power. When I last visited here three years ago, the Metro was still under construction. It is better than I thought it would be, and would be a thrilling ride, I thought, at night when the megalopolis is all lit up and passengers can cheaply gawp at the utter presumption of it all.

I was messaging my oldest friend about the changes and trying to convey the wonder of it all, although she’s been back more recently than me. We lived here for a couple of years about a decade ago (when I began this blog), and so the Metro seemed to me like progress indeed. Yet inside I still felt a certain dread. I couldn’t really believe that just getting to the nearest metro stop to the hotel would make life that much easier, not when it’s 100 degrees in the shade and I have a long track record of getting directions or locations wrong. I was also busy reliving some of the worst moments from when I lived here, and not just transportational ones.

I was a long term resident of Deira’s Hotel California, from where I frequently checked out and, after many false starts over three to four months, did finally leave. The visceral feeling I was getting now was about powerlessness, and this goes very deep and has been the product of some therapy in recent years. This time round though the transport hassle at least would be different, no?

I mean, just outside the new metro stop is a taxi rank. After waiting in the blazing sun with many other people and with few taxis passing by, I think let’s at least get the bus part of the way. Warned by other passengers of the full force of the authorities’ power to give on the spot hefty fines for those lacking a pre-paid ticket, I get off the bus at the next stop, despite being weighed down with luggage. This must surely have helped get me closer to a hotel located, Google tells me, somewhere in al-Mankool near Bur Dubai. The latter was the area that my friend and I eventually ended up living in when the work visa finally came through via a circuitous route that involved frequent buses to Abu Dhabi’s National Media Council. Laysh? Don’t ask.

I got off and walked on in the direction of Satwa, breezing, well by this stage stumbling, past Mankool before eventually realising I had gone too far and that was why Google Maps was telling me the distance was in fact getting greater. A taxi driver pulls up after I reverse direction. I am literally dripping. He is a pleasant guy, Iranian...but no can do, he’s finished his shift and he’s heading home, well not quite, but back to his accommodation, in the other direction, the one that I was previously heading in. He gives me exact, and believable, directions for the hotel. No distance at all in most international cities, but out here, even in early October, it ain’t easy.

Arriving at the desk I am embarrassingly making the counter very wet, periodically mopping up after myself in between sips of the smallest complimentary glass of fruit juice I have ever been given. Turns out I am at the wrong hotel. Right name but not quite the right location. I am actually meant to be staying in the one in Bur Dubai. Oh yes. I remember now. I mean I didn’t book it, but the conversation about the area that we knew well comes back to me. I then remembered leaving the metro stop, al-Faheedi, and seeing the sign for Bank Street (Khaled bin Waleed St that is) outside the once (and still probably) notorious York Hotel, whose bar was the location of the most brazen female whores I have ever seen, anywhere in the world. I remember thinking ...hmmm, Bank St…..then the faint memory connection was gone...the wires fizzled out.... Google Maps was telling me "no"…and I didn’t seemingly have the ability to focus on the instincts. I am told that it’s a mark of victims of abuse that they’re often in a constant and very heightened sense of alert. Sadly this doesn’t seem to apply when they’re broiling and getting instinctive messaging about their location.

So the receptionist in the wrong hotel gets a guy out front to hail a taxi and we head off back to the metro stop and take a right opposite the York Hotel, and a short way down, walkable, even in this heat, if I’d checked with the hotel before arriving. As the taxi cruises past, in order to do a U-ee (how do you spell that?) I wanted to cry, not for the first time today. Ten years ago I used to just get angry, usually with taxi drivers who couldn’t fight back. Now I just turn on myself. Perhaps quite rightly. I mean I did fuck up, didn't I.

Before Mohammed and I have completed our tour of the numerous facilities of my compact but actually very pleasant room, I fess up to him (having furtively checked my wallet before we got in the lift) that I have no (small) notes. He really doesn’t care. I’ll remember to find you, I said, after shaking his hand for the second time before he'd finished his routine. And I will, and maybe he really isn’t that bothered. Not everyone does everything just for the money. He takes pride in his job, as does the “boy”, for that is what they call them in these parts, who later came and brought a sheet, changing it for the thick duvet that all 4 and 5* hotels all over the fuggin’ world give u, even when the AC isn’t necessarily turned up to polar. He too takes pride in his work. When I complete mine, I tear it apart. Another classic symptom, they say. 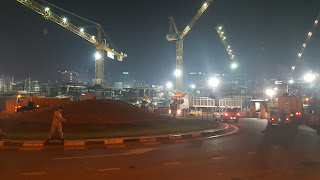 Posted by Neil Partrick at 8:06 PM