Tom Cole Live at The King’s Head in Battle

I have raved about this singer-songwriter before and will no doubt do so again. Tom Cole recently played to a mostly disinterested bunch of revellers and eaters in The King’s Head pub in Battle in East Sussex. You had to strain a bit to hear Tom, who sings confidently but was only accompanied by himself on acoustic guitar. But if you got up close (by propping up the bar nearest to him, as we did), there were thrills aplenty. 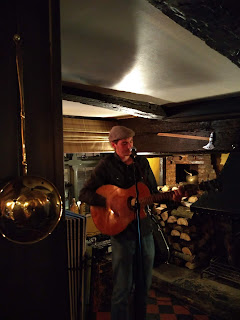 The first part of his two-set show had some intended crowd-pleasers: ‘Cecilia’ (Simon and Garfunkel) for example, and more surprisingly, the excellent ‘Piano Man’ by Billy Joel. Tom’s performance of the Joel song was doubly ironic as it's about the kind of gig that Tom would have been playing if the punters were more interested (or drunk enough), while the song’s knowing take on what it’s like to be the man behind the mic applies whether people are ‘in the mood for a melody’ or not.

Mr Cole is a deft purveyor of Americana but without the preciousness that some performers of the 'genre' have (especially when they’re from the UK-side of the pond). He includes pre-'Americana' Americana in his repertoire and performed a nice version of ‘Early Morning Rain’ by the God-like genius that is Gordon Lightfoot (a Canadian). Tom went on to splice a Dylan song with one of his own. I cannot read my notes which were scrawled the morning after, but I think the Dylan number was‘Tomorrow is a Long Time’. Regardless, Tom’s part blended well with His Bobness.

To cover the tortured Jackson C Frank - ‘Blues Runs The Game’ - emphasises Tom’s confidence and musical maturity. Tom's latest EP, ‘Ramblin’ Man’, contains only self-penned songs (on sale via his website www.tomcolemusic.co.uk). The title track went down well live but, like all of the versions on the EP, benefits from a deft fiddle accompaniment.

Tom did a stellar cover of a Townes Van Zandt song, whose title I cannot remember either. (Suggestions on a postcard please). My friend and me were impressed enough that Tom would cover an artist whose songs deal in pain without having to shout about his suffering. The fact that Tom did one so well was a wonderful bonus. 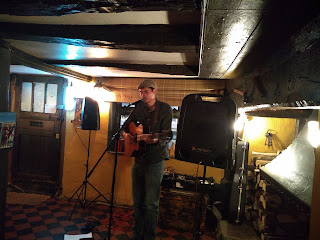 One of the best things I have ever heard Tom do is ‘In My Time of Dyin’’, which he performs closer to its original Gospel style than Led Zeppelin shooting their bolt all over it. This was the undoubted highlight of the night (as it was the first time I saw him play). I don’t know if he’s considered getting the tapes rolling for a live release of this and other numbers, but he certainly should.

‘Will The Circle Be Unbroken’ isn’t perhaps an obvious choice for the beery boys of Battle, but its time-honoured folk protest verities have their place. By this point the ale was kicking in with me too and we (I think) danced a bit to something Tom played before his finale: ‘Oh Lord Won’t You Buy Me a Mercedes Benz’ (co-written, and made famous, by Janis Joplin). This did entice the revellers from the other side of the bar into the gig. Or at least one of them. A lady stepped up, grabbed the mic and performed a more than passable interpretation. (I hope she doesn't mind me including this shot (below) of her enjoying the applause).

Way to go Tom Cole. And hats off to The King’s Head in Battle for hosting this talented performer. 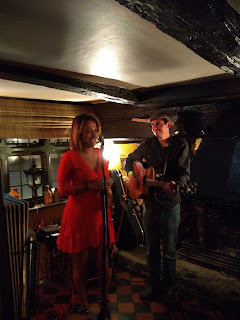 A great review. Have seen Tom a few times live and play the CD regularly. I love watching live music but regularly get irritated when audiences do not respect the artists. Hopefully catch up with Tom again soon.

Thanks a lot Gezz; hope to meet you at one of Tom's gigs before too long. All the best Neil

As ever, an excellent review. I am apparently one of very few human beings alive who actually likes Dylan's Self Portrait (not all of it, I hasten to add), which is where I first heard Early Morning Rain, a wonderful song, and in my opinion a great reading of it. It's encouraging to hear that Tom Cole is mining such a rich seam in the mid 20th century American songbook. I do understand that post-X Factor audiences may be baffled by songs that actually have gravitas and resonance, but hopefully performers such as Mr Cole will help redress that.

This comment was submitted by the musician Pete Sadler:

"Good review Neil. I had no idea there was a pub in that street and even less that it supported live music. I think I remember you praising Tom Cole a while ago and he sounds like he may get somewhere. As for the songs I don’t think I’ve heard Dylan’s Tomorrow is a Long Time in anyone’s repertoire despite it being a very beautiful love song. I have a copy of Dylan performing it live at Budokan many years ago.Likewise he recorded In My Time of Dying in ’62 using a lipstick holder as a slide. Tom seems to have picked some very good songs for his set and I think he should bang some of his own in amongst them anonymously to gauge reaction, if there could be in a pub full of indifferent diners and drinkers. Nice one. Pete." (For my profile of Pete Sadler: see https://oldfolkrebels.blogspot.com/2017/11/regrets-ive-had-few-musical-life-and.html)

Many thanks to Gezz, Pete and Keith for their comments. It's great to get feedback but it's far more important to support a budding talent like Tom Cole. I think Pete's idea of just putting in your own material without an announcement is a good one. From memory I think that Tom also performed 'Long Way Home, a song of his from the 2nd Hastings Friendship Group CD 'Circle of Trust'*, a solid and catchy number it is too. * See https://deiradiary.blogspot.com/2016/11/the-circle-of-trust-hastings-friendship.html

BTW Keith, I like all of Dylan's 'Self Portrait' album, and really enjoyed the Bootleg Series expanded version released a few years ago. The original LP should obviously have been a triple album!