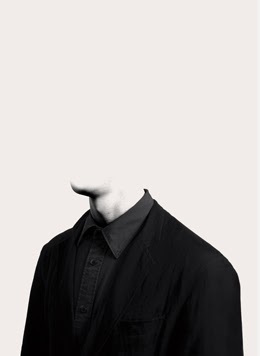 Without poring over every word of George Orwell’s dystopian novel it is hard to be sure of how far the theatrical interpretation of 1984 currently showing at the Almeida in London has gone in updating the message. However the word “prole” has definitely been expunged from the contemporary NewSpeak dictionary used by Robert Icke and Duncan Macmillan in putting this production together. Orwell, I recall, wasn’t afraid to liberally pepper his text with it, mindful that “The Party” that he was partly satirising would alternately ideologically deify the working class, and exploit them as revolutionary cannon fodder. It was the Soviet Union after all that gave us that wonderful Newspeak neologism “Proletkult”: the term for the state’s promotion of what they imagined to be “true” working class culture.

In one of the most telling moments in the book, Orwell, through his anti-hero Winston Smith, says on hearing a woman sing an old East End pre-revolutionary tune, “if there is any hope, it lies with the proles.” In this attitude Orwell partly betrays the superior attitude of what he famously defined as his lower upper middle class roots. But he was also underlining the disconnect between the particular class in whose name the totalitarianism of the left was enforced, and that class “in and of itself” (as Marx famously prophesied it would one day become).

The Almeida version of 1984 has Smith talking rather more than I recall his original self doing about the common bonds between us all, and the need to end the suffering imposed across a global system. This was a more liberal internationalist message than Orwell was making when he wrote the book in 1948. He was, it is true, warning of the dangers of the illiberal trends with which he was personally familiar in a post-war Britain that was rebuilding the state machine and constructing a new (Soviet) enemy at breakneck speed, and, as this production also underlines, he was warning of our unthinking complicity in the destruction of freedom. However his particular venom in his later years was directed at the central model of the book: the Soviet system and its international fellow travellers, including those in the UK then were very prominent in literary circles, who would merrily trot out the latest Moscow line. This play begins where the book ends, a meeting of a book club set way into the future, who, cleverly, are talking rather more about the fate of Orwell and his warnings than they are the diary of Winston Smith that Orwell actually has them discussing. What use was it if it didn’t change anything, and, anyway, it was the vision of a dying man, they lament. 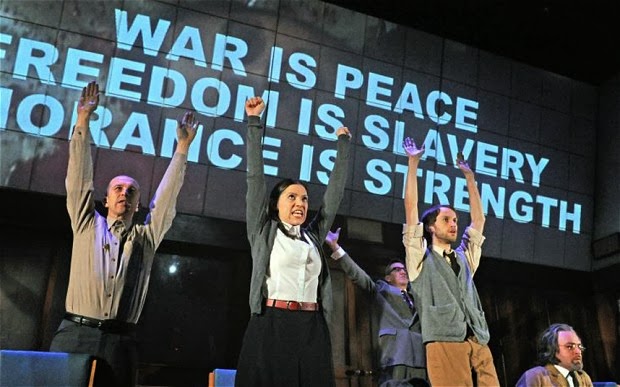 Women don’t fare too well in this production (contrast the indifferent Julia as played by Hara Yannas at the Almeida with the powerful performance by Suzanna Hamilton in the 1980s film version), but  in practically the final lines of the play, a woman member of the reading group fumbles her way to the opinion that the reason they don’t know when The Party lost power was because …maybe …it hadn’t.

Trite, but that’s the update I guess, and one, whilst not irrelevant to Orwell’s worldview, that is, ironically, a little too devoid of historical context. It was Smith after all who spent his days helping to destroy history to suit The Party. O’Brien, the high party official played by Tim Dutton, in the best scene in the play and of the book, says to a gruesomely tortured Smith (played by Mark Arends) that you think your idea of truth can save the world, but we control what is true because we control the past and, therefore, the future.

There are perhaps parallels to be made with the fast changing received wisdom of the contemporary era. History is not so much made by the victors as systematically disregarded in the pursuit of an understanding forged through the equality of instant exchange on social media. Orwell could not foresee this. For him what was in real life only the nascent technology of the “telescreen” was likely to become an instrument of state control. In a loaded contemporary media spin the play has us watching Winston and Julia in bed – we are all Big Brother. On social media we are the complicit destroyers of history, instantly creating new realities, all of us equally worthy of our say. We are now global citizens, fighting for freedom against the global Big Brother.

Orwell had a word for that. Doublethink.
Posted by Neil Partrick at 10:49 PM

Or(s)well that ends well....can't tell whether you enjoyed your evening out or not?

I like your contemporary take on Doublethink (thinking off-the-cuff were're caught in layers of Multithink, constantly trying to untangle...). E.

Multithink is a great linguistic modification for the present where the sheer quantity of information forces thought into multiple shallow channels resulting eventually perhaps in the death of any quality or meaningful thought at all!

Many thanks for these responses from SD, E and Apocalyptica - I like the idea (but not necessarily the practise) of multithink!)