Mike Hatchard, jazz musician and singer, played a nearly two hour set this afternoon in the tiny East Sussex village of Crowhurst. Mike is a jazz and popular music veteran. As a young man he was Matt Munro’s musical director, he played with Barbara Thompson's Paraphernalia, and in recent years he has been playing up and down the English south coast with Herbie Flowers, former bassist with Sky and session man on many a classic 1970s rock album.

Those who came to Mike’s Jazz Breakfast at 1030 am on a Sunday morning in Crowhurst Village Hall were served bacon butties and coffee before he took to the electric keyboard, opened up with Sinatra's 'Come Fly With Me', and then provided the audience with a musical guide to some of the leading pioneers of 1920s jazz piano. 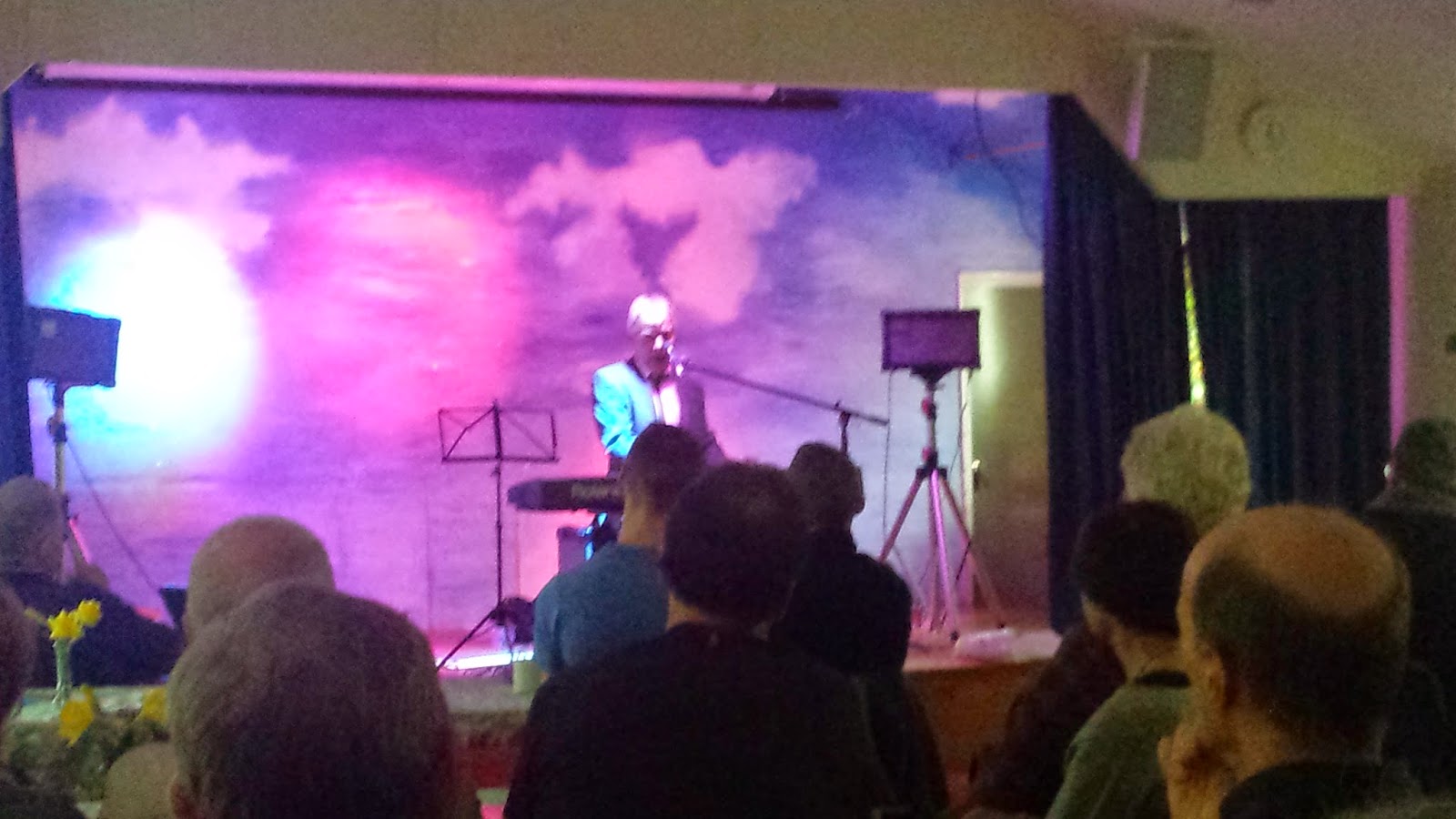 Mike plays with feeling and can sing often highly challenging and diverse material. A ragtime number associated with James P. Johnson and a boogie woogie tune popularised by Charles ‘Pinetop’ Smith were played with dexterity and gusto. Performing ‘Spain (I Can Recall)’) a Corea/ Rodrigo/Maren/Jarreau tune that Al Jarreau normally sings is not easy, but Mike carried it off. George and Ira Gershwin’s ‘Someone to Watch over Me’ was sung and played with great tenderness.

More striking still was his take on  ‘The Dutchman’. The subject matter of this Liam Clancy folk number is a lifelong love ravaged, but not ended, by senility. Mike clearly loves this song deeply. It should have brought the house down. The audience were, I think, still taking it in long after he had moved on to the next number.

Mike has great rapport with the audience, regaling them with tales from the road, which in his younger years was often traversed by bicycle. Such was the sympathy that Mike created, he even got away with an embarrassing ‘comedy’ number from a very different era: ‘Have Some Madeira, M’Dear’, a tale of an old man seducing an underage girl with the aid of fortified wine.

At one point Mike brought on Crowhurst’s newest resident to play the trumpet. Paul Eshelby is a professor at the Royal College of Music. More importantly he is a sensitive as well as a virtuoso musician. I am sitting in a village hall with 50 people on a Sunday morning watching Paul play ‘My Funny Valentine’ to Mike’s skillful piano accompaniment and thinking that in many other Sussex villages this space would be reserved for amateur dramatics and the bingo. In fact the children’s club was scheduled to follow. 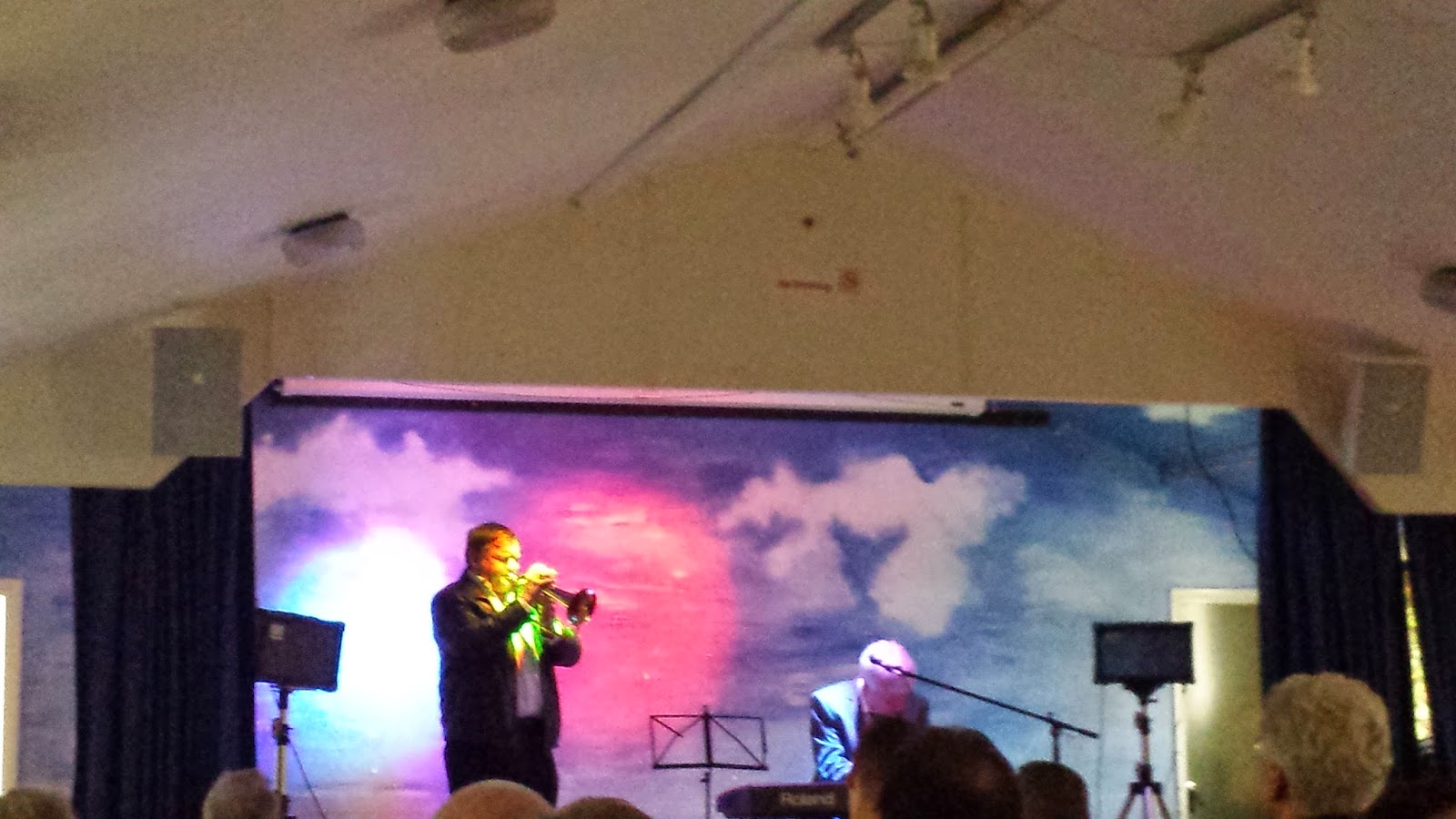 Toward the end of his set Mike picked up the fiddle and performed a couple of numbers in a swing style accompanied by Paul and Steve Savage, an accordionist.  The three musicians’ feigned exit through the audience brought very loud applause and many, well-deserved, shouts for more, to which Mike responded by switching to an acoustic guitar to perform a French gypsy jazz number with Steve.


A great show. Look out for Mike performing with Herbie Flowers at the St Mary's in the Castle in Hastings, and elsewhere on the Sussex coast.
Posted by Neil Partrick at 9:01 PM