Three sympathetic English souls have teamed up for a series of ‘In The Round’ singer-songwriter performances in the UK. Last night they arrived at a gem of a venue on the English Riviera: the Electric Palace Cinema in Hastings Old Town, Sussex. Danny Wilson initially got the most attention - by force of personality and sheer volume. For my money the subtler song-writing and performing charms of Neil Halstead and Pete Bruntnell had more to offer, however.

Danny, he of Danny and the Champions of the World and Grand Drive, is less suited to the unplugged acoustic vibe. After all his ‘Champs’ band is a full-throttle affair. Ironically perhaps, such was his vocal force that Danny could have been totally unplugged; it would have been more comfortable for all of us if he had. However Neil and Pete (pictured left and centre respectively; see below) kept an amusing comic routine going as they shared one mic stand between them. 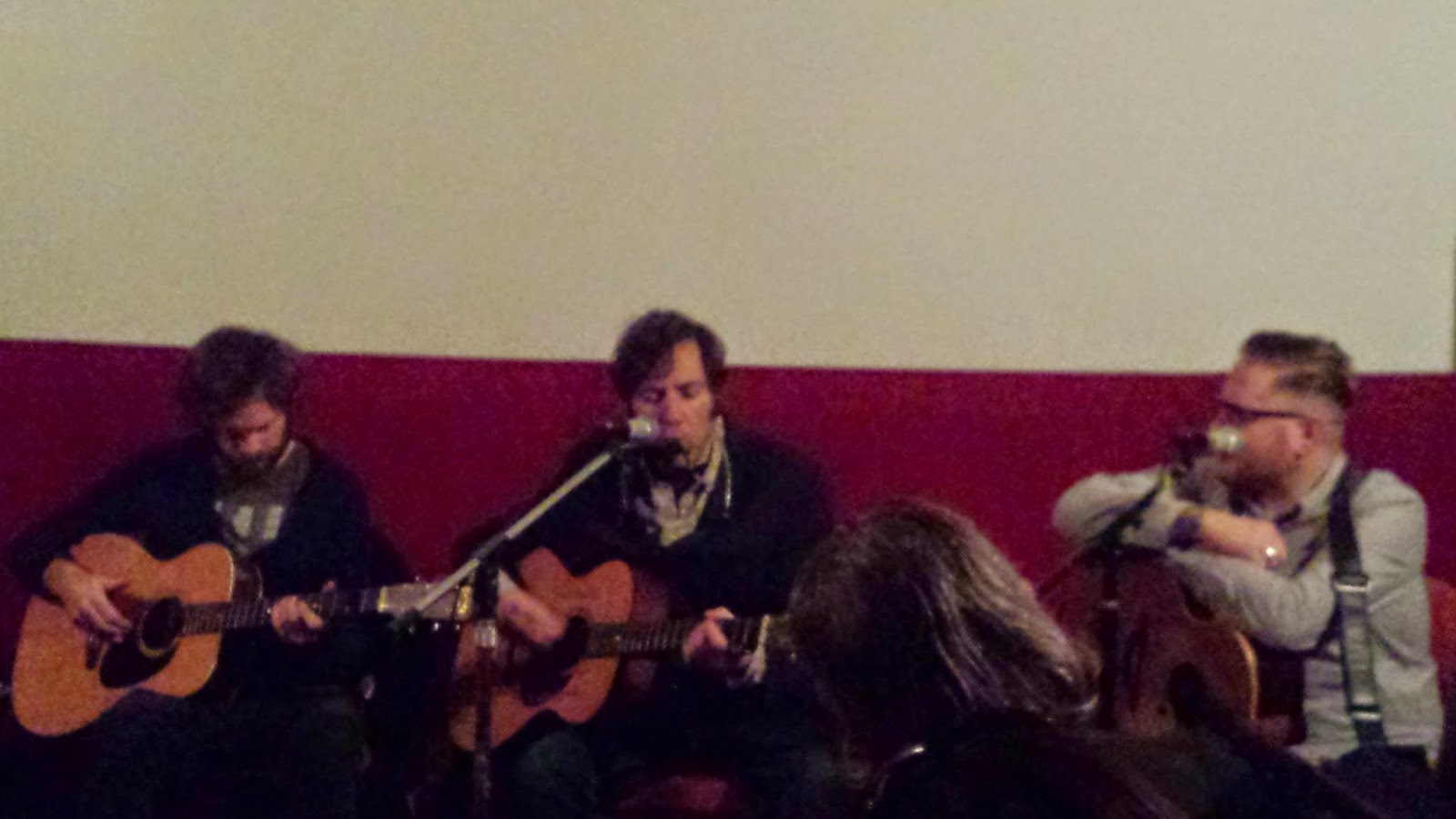 Neil has performed with Mojave 3 and Slowdive, names familiar, like the Champs, from BBC6 Music. Solo, his sensitive but engaging vocal style, and measured, subtly powerful, songs, were perfectly able to hold this, admittedly small, audience. Initially he came across as the Nick Drake of the three; Pete, harmonica in tow, being the Neil Young (especially circa ‘Hawks and Doves’); with Danny as Bruce Springsteen. By the end of the evening all three had imposed their very distinct personalities and such comparisons had become (largely) superfluous.

All three also deployed amusing on-stage, between song, banter, both with the audience and each other. The drollest was Pete, who came across as a more accessible Peter Cook. Sardonically introducing a song (‘Meet the Swells’) ‘inspired’ by building development issues from when he lived in Surbiton, he humorously toyed with the audience’s liberal sensibilities before launching into a typically passionate, intense, and empathetic performance.  Introducing ‘Tin Streaming Song’, Pete began to muse on the death of mining in Devon, before self-effacingly cutting that short and launching into his strongest performance of the night, which ended with a chorus that, for him, was untypically loud and demanding, but no less appropriate for being so.

Highlights of Neil’s contributions were ‘Tied to You’ , ‘Mighty Engine’ and ‘False Start’. There was no problem in tackling the latter. Yet, tired - he had driven his fellow musicians from the previous night’s gig - Neil struggled to remember the words for a couple of other songs in succession. ‘Elevensies’, he claimed, was used by US public service broadcasting as an anti-drugs song  - ironically, according to his website and to his comments last night, as he is rather fond of chemicals. Another song with which he struggled was a tale of love forlorn, but he was determined to nail it and, eventually, after two false starts, he did. The audience though, amused by his and Pete’s shoe-gazing musical sensibilities and seemingly stoned (or just knackered) disposition, didn’t care, in part because of the love they felt for these performers, whether already converted, or, in my case, getting there. These guys are no slouches either, to which their packed performance schedules, together and apart, testify. 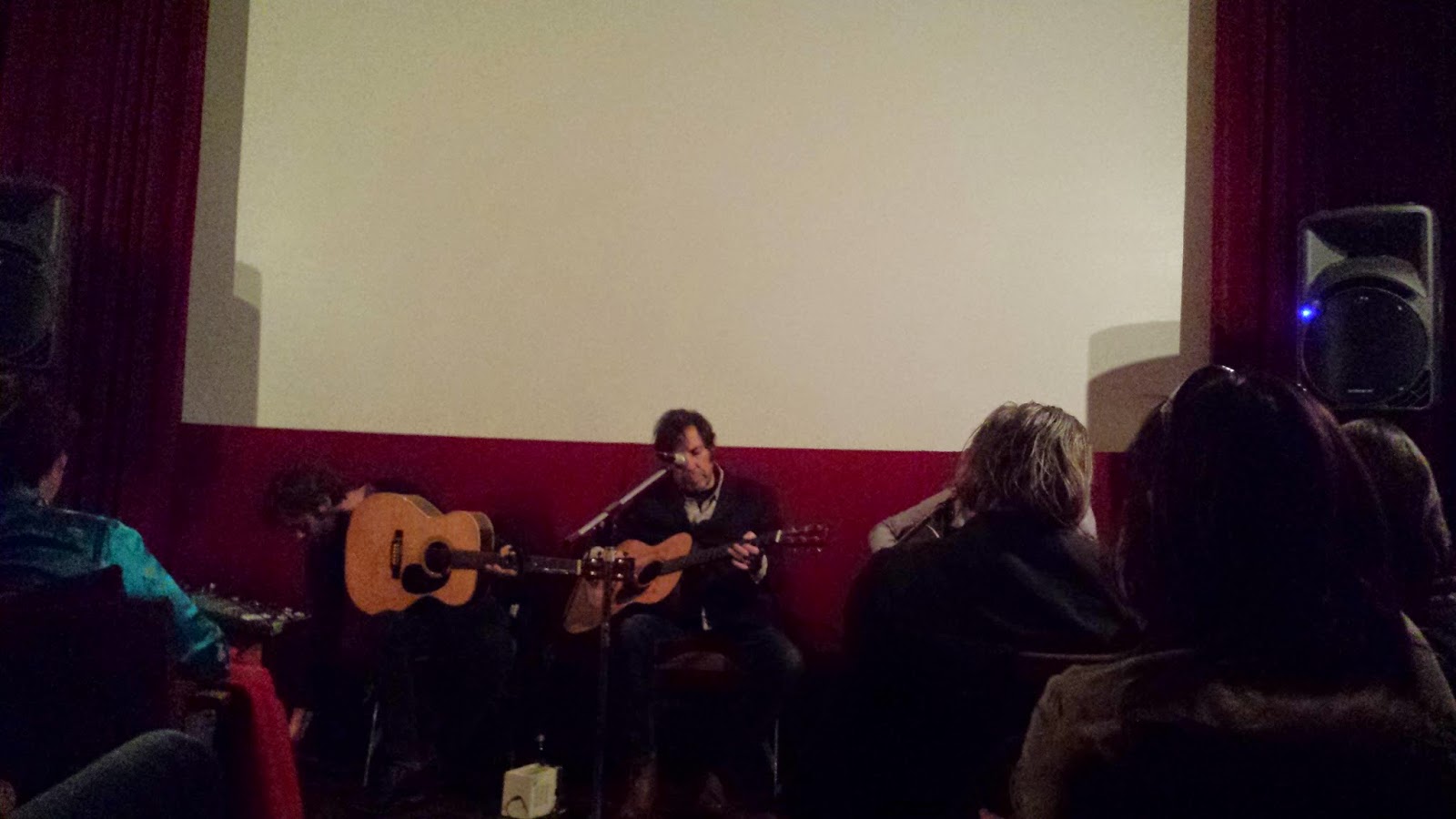 I wish I could enthuse as equally about Danny George Wilson. He admitted to an overuse of ‘whoas’ in his lyrical range. He is not alone in this, it is this era’s favourite vocal tic. Danny uses it with more feeling than typical of much mind-numblingly moronic pop on which it appears, but generally he sounded like a man trying too hard. Sometimes his over the top sensibility worked – breaking, mid-way through one of his own numbers, into ‘Stand by Me’ was bold, inspired, and he got away with it. Other times songs that told tales of hitching to a gig with his Dad or of a love affair with Henry, a van that had once transported his band’s kit, were just cloying.

These are three great guys who, despite their musical differences, gel. They each added nice guitar and sometimes vocal touches to accompany the other. It was a shame though that they only truly shared singing and guitar duties on one song, the finale, and the one cover of the night, John Prine’s ‘At the Speed of the Sound of Loneliness’. This though was a sublime way to end the show.

Posted by Neil Partrick at 7:56 PM