Folk and blues at The Six Bells Chiddingly

I hadn’t been to the Six Bells pub in Chiddingly for more than 20 years. That occasion was a meal when we met my brother’s wife to be (and my brother). The last time I heard live music there was 30 years ago. Jazz on a Sunday lunchtime with Mad Andy, as he was affectionately known. Andy, whose surname I don’t think I ever knew, was a Glaswegian tenor sax player, renowned drinker and tractor driver, none of which appeared to be an impediment to his ability to do the others (although he didn’t, to my knowledge, drive his tractor into the pub). In fact we were so dedicated to hearing the man that we would also check him out at the Wednesday night jazz slot held in the, less appealing, basement of a Tunbridge Wells wine bar.

To return to “The Bells”, as we aficionados used to refer to it, after all this time and to attend a folk and blues open mic night (held on alternate Tuesday evenings) was as unexpected as it was a treat. Our main reason for being there was to witness the first public gig by our 14 year old nephew Neil Grove. In fact I never gave a moment’s thought to the idea that anything else would be of interest, but a high standard was pretty much maintained throughout the evening. As we arrived Ella Moonbridge was playing solo penny whistle, which was nice. Her next number was a paean to her father. “South London Irish” would probably move you if the word “father” doesn’t remotely make you uneasy and if you like your sentiment served up in overly generous portions.

Clive Woodman gave us a romanticisation of the Green Belt, and, a more poignant, ‘Burning in My Heart’.  Next up in what we learnt had been planned as an evening of original numbers was another singer/acoustic guitarist, Chris Mansell. He introduced himself by saying that he found it quite nerve-racking to be in front of us playing his own songs, rather than other people’s. He needn’t have worried. His first, the cleverly titled ‘Too Hot for Horses’, reminded me of Lou Reed/the Velvets as he thrashed out the rhythm and, lyrically speaking, took us to a fairly dark place. Well, darker than I expected at an open mic folk and blues night. ‘Platinum Blonde’ was sadly not in the same league, more serviceable than substantial.

To the delight of the regular audience, and especially of their populous and mobile fan base, two young performers then took to the stage. Pete and Roxy (so 1970s) performed a couple of Pete’s murder ballads. “I didn’t do it,” Pete mysteriously twice exclaimed. Roxy has a good voice, although more dramatic effect would have been maintained if she had sung the words from memory.

We were then back to the oldies in the form of Martin and Mike. Martin is an undoubted wit. His opener, with Mike in guitar accompaniment mode, was a tongue in cheek appreciation of the devices with which you can offset the tiresome onset of physical decrepitude. ‘So Much to Look Forward To’ indeed. His second song was a comic take on the bourgeois blues, but less Leadbelly than a very anglo Randy Newman (minus piano). Sung as a twelve bar, ‘I’ve Got The No Reason to Sing the Blues, Blues’ bemoaned the comfortable cash and asset-rich life than many a middle-aged, middle class white blues man has to endure. Mike then quit to leave Martin to display his compositional talents. The first, a ‘Song for a Friend’ (if I have that right) was strong but left me baffled. The person in question, a man whose opinions, he sung, provoked you and who, we were told afterwards, made a pot of money, was, I think, supposed to be known to us all (among the string of recent entertainer deaths). However I am still none the wiser (it’s probably my age). The second was a more general song about friendship. We all need it. It’s true.

Chris Liddiard is a self-styled irascible old rock ‘n roll cove. Roughly calculating from his between song recollection of first playing live in 1955, he must be well over 70. If anything that gave his comically jaundiced ‘The Price of Fame’ even more of an edge. ‘Long in the Tooth’ followed – the clue’s in the title. Excellent.

Simon Watt, another singer and acoustic guitarist, followed. I think he found playing a couple of his own numbers a relief from having to take photos all night (for the 6 Bells Folk and Blues Club website). His first, ‘This House Will Surely Last’ has, he said in introducing it, something wrong with it, and he invited us to work out what it might be. I didn’t have the heart to say that the answer might be that it sounds like Neil Young’s ‘Sugar Mountain’. But hey, that’s no bad thing. His second was, he said, put together from lyrics of his wife’s that he had thrown in the bin almost as soon as she had proffered them. ‘Lifetime Blues’ (the clue is in the title?) turned out to be a romantic number (apparently). Either way, it was very good.

At last, after what must surely have seemed to him like an eternity of waiting, Neil Grove was next up, accompanied by the slightly older John Oddy (see pics below). The legend goes that they had been jamming the weekend before when the idea of doing this gig suddenly came up. 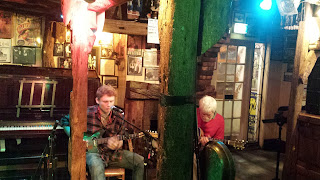 Neil insisted afterwards that he wasn’t nervous about not only doing his first gig, but having to both play lead guitar and sing at the same time. Singing is though something he rarely does, even in front of his (renowned folk singing) Mum. He and John covered Elmore James’ ‘My Baby’s Gone’ and Muddy Waters’ ‘Long Distance Call’. Neil made playing guitar seem effortless, which, as he’s barely been playing it for more than a year, is quite something. If there were times when his singing seemed like a fill in between his slide guitar solos, that is something that more live experience will take care of. As, no doubt, will time resolve the disconnect between his youth and the worldly-wise sentiments he was expressing. John wasn’t bad either. 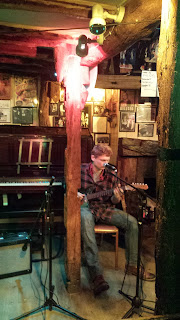 Folk went country in the form of Terry and Mel Martin (see pic below). They kicked off with the famous (infamous?) ‘Duelling Banjos’ (as in the film ‘Deliverance’), but played it on acoustic guitars. No mean feat. They followed this up with Norman Blake’s ‘Bill Gray’. While not original, this song was not known to me, even if the writer was. Mel’s convincingly country vocals and Terry’s accomplished playing made me want to check out some more Norman, and some more of them. 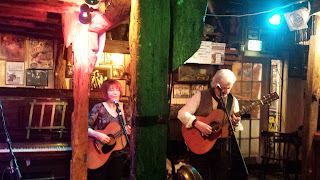 Blues standards were proving infectious. Next up was what I took to be the traditional closing, all-star, line up. Penny Payne is a bit of a blues shouter in the Etta James vein. She brought many of the older musical hands of the evening up there with her to help out on Ma Rainey’s ‘CC Rider’ and on the song popularised by Muddy Waters, ‘I Got My Mojo Working’ (whose sexually charged inferences are normally, and undeservedly, a male preserve). 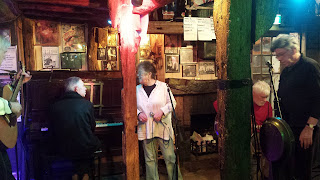 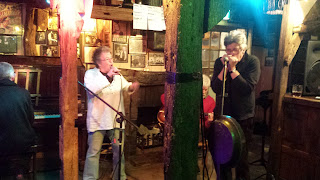 As this point we made our excuses, rude perhaps as Ian was doing a decent cover of ‘Walking in Memphis’. As a consequence we missed entirely the singer, Rachel, accompanied by, once again, John Oddie. The evening was apparently closed by Corin and his band Cobretti.

A great night out at The Bells. Well worth checking out again.

Ha ha, many thanks Nessa.

Many thanks Anonymous. Now it makes sense! Didn’t realise Andy was a potter too. A great talent all round