Hastings Friendship Group’s 61st gig for charitable causes was the usual semi-chaotic mix of highs and occasional lows. Held, as is often the case, at the friendly Gecko Bar in St Leonard’s, it showcased local musicians of varying abilities but who all share one overriding passion: to perform to their best for those much less fortunate than themselves.

To get the gripe over with early: the best performer of the night, saved ‘til last, was Eddy Odel. A man who over 20 years ago had his sax playing career cut short by not one but two car crashes within 12 months, plays acoustic guitar and sings country-style ballads in an exquisite manner. The trouble was I couldn’t hear Eddy’s delicate song style for the sound of two people sitting just a few feet away from him jabbering loudly. I or someone even closer to them should have politely intervened. We didn’t and eventually Eddy lost his rag. He instantly regretted it, but miraculously managed to carry on unaffected, barely missing a beat (as it were). 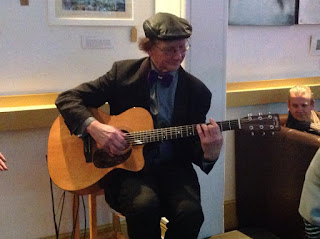 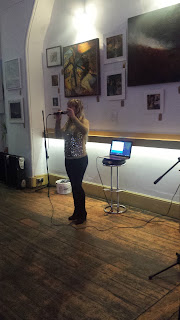 A performer who was perhaps better suited to the bar vibe, Oksana from Latvia, has her own way of drowning out the revelers. She belts out power ballads aided by a synthesised backing track care of a plug-in laptop. Cllr Trevor Webb, principal HFG organiser, was keen to explain to me that Oksana can play keyboards and that they are trying to hook her up with local musicians. Perhaps she should bring a portable keyboard next time.

Oksana (pictured right) told me that she had written the song she performed in English, “When You Go Home”. While she is a better singer in her native Latvian, this was a well-crafted ballad that showed off her undoubted vocal skills and comfortable use of English. The second number, performed in Latvian and roughly translating as “After the Rain”, was, paradoxically, less interesting. It sounded a lot like 1980s EuroVision (which, if that’s your bag, may be a very good thing).

Mike, ‘Taffman’, Guy often plays in the Ghostfinger duo with Patrick McGerr. Tonight he was performing solo, but was no less appealing for it. Beginning with an excellent cover of the wonderful “Angel from Montgomery”, by one of the world’s finest song writers and performers, John Prine, Mike is no slouch at writing and performing his own material either. “Sussex Hoedown” is a lively referencing of county life, as is “A259”, a touching reinterpretation of the more familiar "Route 66". Mike is available for hire. Check him out via http://fandalism.com/taffmanmike

He is also one of the performers due to be included on the forthcoming CD, “One Hastings Many Voices – Volume 1”, dedicated to the memory of the much-missed Hastings Council leader, Jeremy Birch. Hastings Friendship Group (HFG) is currently recording a number of its regular musicians for the release of the CD this April. In fact Volume 2 is already being planned, conceived as a fundraiser for two Sudanese charities, Together for Sudan and Children of Sudan. Tonight’s gig raised money to kick-start a recording that will draw on a more international cast of performers but who, like those on Vol 1, are mostly based in and around Hastings and St Leonard's.

Another contributor to Vol 1 will be Dan Wahnon (pictured below right). Accompanying himself on acoustic guitar, Dan worked hard, alternating between reinterpretations of old and newer covers, including Skunk Anansie’s “Weak (As I Am)”. 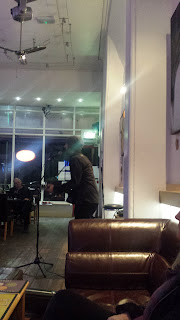 Andy Ives (AKA Flashboy), also included on the CD, was playing only his third ever gig, Trevor told me. With his laptop in tow this was akin to karaoke, but with a difference. Who else in the world would juxtapose Nine Inch Nails’ “Hurt” (sung ala Johnny Cash) with Neil Diamond’s “Love On The Rocks”? “Hurt” was the more rehearsed and is the easier of the two to sing, though no walk in the park. It came across well, even though the backing tape threatened to overwhelm the performance at one point.

Jim and Eric (see pic below, centre), so named for the evening only, were more like old stagers. Jim Westlake (from local band 'Bad Whisky') played blues harp accompaniment to Eric Harmer's vocals and acoustic guitar. Their covers were mostly of blues/rock classics and they performed them well. Surprisingly, he and Jim chose to end their set with an affecting cover of “Clocks”. Eric freely admitted afterwards that this is the only Coldplay song he can stand. 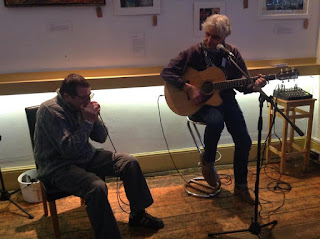 Paul Crimin is an unpredictable musician. Some covers he performs, as he would probably admit, fall flat. However his take on the Passengers’ “Let Her Go” was heartfelt and it showed. He closed with Chris Isaak’s "Wicked Game". It is not easy to sing in Isaak's distinctive style, but Paul succeeded.

Another good HFG gig. It was (mostly) live, and helps both local musicians and those in need beyond these shores. Credit to local councillors Trevor Webb and Nigel Sinden for all the good work that HFG does.

Posted by Neil Partrick at 2:47 PM

Thanks for the review. I certainly do admit that some of my covers fall flat but as I freely admit to Trevor I use the HFG gigs as a kind of glorified rehearsal, trying out different songs to see if I can do them and if they work or not. If they don't, I move on and try something else next time. As I have now performed at 30 odd HFG gigs, I have played through a lot of songs!I enjoy myself, and as long as I don't have people running from the room when I play, I'm happy, as these shows are always for worthy causes.One day you may hear me when I find six songs which suit me perfectly, but I wouldn't hold your breath! Thanks again. Paul.

Many thanks to you Paul! For making this very considered comment on my blog at all, and specifically for being so fair minded about what I wrote, and of course for playing regularly at HFG and other events. It means a lot to me to get a response. So few bother, and I welcome all comments, fair or not! Best wishes Neil

Thank you for your support and for being honest in your blogs. Best wishes Andy (Flashboy)