‘One Hastings Many Voices’ is the first release by Hastings Friendship Group (HFG), a charity that provides a platform for musicians whilst raising money for local and international causes. In that same spirit, the album, due to be totally done and dusted by end-April, brings together a diverse range of HFG regulars with the strict remit of only singing original songs, all but two of which has been written by the artists themselves. The cost of performing copy-writed songs would be prohibitive for HFG. However this has provided a welcome discipline that some of the performers have benefitted from. The tracks have been recorded by musician Nelson King at his Empty Space Studio (located in a spare room in his Bexhill home, I am told – see pic below). 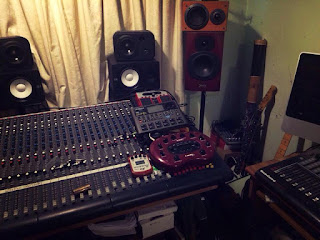 Executive producer (i.e. part funder) and HFG mastermind Trevor Webb sees the disc as a welcome opportunity to promote local talent. “Helping those who have helped HFG,” as he puts it. He is also grateful to Nelson, who also plays on many of the tracks and wrote two of them, for providing his professional services at a very generous rate.

Inevitably, on what is an 18-track compilation, some songs make a stronger impression than others. However there are no duds, and some will undoubtedly repay further listening – “growers” or “slow burners”, as DJs used to call them. In the latter category I would definitely place Kate Maunsell’s ‘Deeper The Wheel’.

Kate (see pic below from a recent HFG gig) is probably better known locally for having been the lead singer in various heavy rock bands, the most recent of which is Hastings metal outfit, Warhawk. Trevor says that when performing at HFG gigs and on this disc, Kate has a “different persona”. My impression is that this is a welcome transformation. Her style here is more laid-back, mid-tempo acoustic rock but performed with conviction. This particular song documents romantic troubles in a clever, not clichéd, fashion. Kate sings it well, and the song benefits from some fine guitar accompaniment by Nelson. 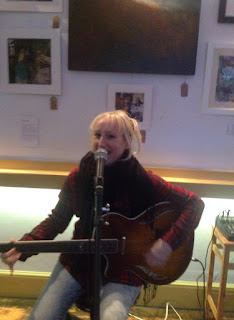 A man with far less experience but a whole lot of enthusiasm is Andy Ives (whose musical persona is Flashboy). Very new to HFG and to live performance generally, Flashboy benefits from singing Nelson’s ‘I’ll Fall for You’. Not having the baggage of the ambitious pop and rock classics he normally tackles, the number allows Andy to establish a comfortable MOR groove, aided by Nelson on synth “strings”.


Among the older hands performing on “Many Voices” are Nick Warren. His ‘Community’ is a humorous celebration of HFG’s shtick and should in my opinion open the album when the running order is finalised. Mike Guy, another HFG stalwart, performs an equally fun tribute, unsurprisingly entitled ‘HFG’, when performing live at their gigs. Nelson tells me that Mike now has the difficult talk of choosing one of the four different versions they have recorded for the CD.

Saspirilla Sam (otherwise known as Peter Garofalo) is a HFG favourite. His song, ‘Hastings Town’, is a tribute to his adopted home. It makes you want to spend a lot more time there. In fact he ought to be paid by the local tourist board. 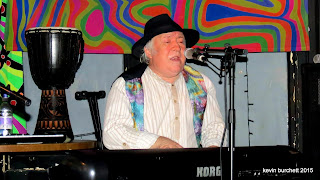 Completing the old stagers’ contributions is Pete Williams (see pic below from an HFG gig). His country-flavoured ‘But How’ has the feel of a standard. It combines musical warmth, aided by Nelson on slide and bass guitars and percussion, with a performance rich in vocal and lyrical feeling. 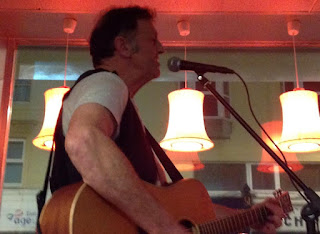 Tony Peake (see pic below) is a Hastings poet and singer-songwriter. On ‘Vampires’ he is half deadly serious, half humorous in his verbal assault on the powers that be. 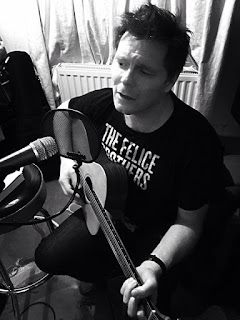 Paul Crimin’s comments on Facebook ahead of his recording session this week showed how excited he was about making a contribution to the album. His track ‘Who's Gonna Hold Me Now’ is now done and in the bag, but was not available for me to review at the time of writing. Many of the tracks are though freely available via the performers' Facebook pages. However HFG are obviously very keen for people to buy the CD, not least given the effort involved and the cause, at the very reasonable price of £5. It will be sold at HFG gigs of course, and perhaps, until stocks last, at some supporting local venues.


Nelson King's contribution to the CD is 'Lost in You'. Both his vocals and the song's style are reminiscent of Dylan or Mark Knopfler in the 1980s (without the production bombast). I loved the line “last man standing on a lonely street.”

Among the young guns present on the CD is the ever impressive Tom Cole. His self-penned ‘Push Me Out To Sea’ has a lyrical maturity that belies his years and sounds authentically, if a tad self-consciously, in the folk tradition.

Irina sings in her native Russian in a polished (perhaps a little overly so) synth-accompanied track, ‘I Had A Dream’. Andrey (see pic below) is, Trevor tells me, half-Latvian, half-Russian, but sounds very English when singing Nelson’s song ‘Celebrate’, a jazzy arrangement enhanced by the latter’s acoustic accompaniment. 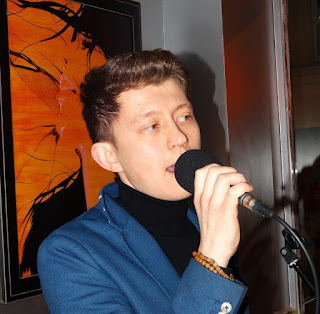 The vocal style of Jerri-Leigh (Brody) is more urban. Her number ‘Runaway’ is a moving love song that doesn’t actually need its synthesised strings to create atmosphere. Nelson’s sensitive acoustic guitar alone would have provided a suitably pared back accompaniment to her affecting vocals. Suddenly it’s over, a little too abruptly. Remember the name though, this woman could get somewhere.

Singer and acoustic guitarist Dan Wahnon teams up with electric guitarist Dan Duke for ‘Reload’. Dan W has a cool, transatlantic, vocal style, and performs here a radio friendly number that would also work well live. Joanna Turner (see her Facebook pic below) performs ‘Right Time’. Like Dan Wahnon, she has become a HFG regular, performing with a pop and RnB ballad sensibility. To her credit Joanna normally plays several of her own songs, solely accompanied, as she is on this track, by herself on acoustic guitar. 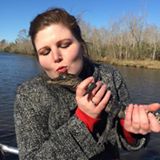 Steve Avery sings and plays guitar on his up-tempo song ‘Someday’, with Nelson on drums and bass. Jazzi B (see pic below), otherwise known as Jasmin Bollen, is due to record her number this week, which will be the final track to be included on the disc. 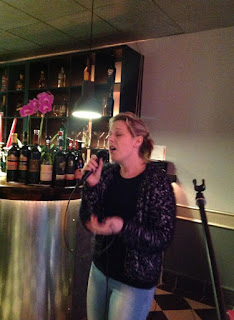 The CD is dedicated to the much missed Jeremy Birch, a man whose popularity was born of being more than the leader of the local council. Jeremy was driven by his commitment to the development of Hastings for all who live in the area. ‘Song for Jeremy’ should in my view close the CD. Nelson had to squeeze its performers, the seven-piece folk ensemble, the Wobblies, into his home studio. The result is one of the strongest contributions to the disc. The Wobblies take their name from the nickname of the Industrial Workers of the World, the internationally organised trade union. With more than a nod to renowned local writer Robert Tressell, the main refrain goes, “No more ragged trousers in this philanthropy, justice and freedom is the song for Jeremy.” The Wobblies have been performing this moving tribute since Jeremy died on May 6th last year. Appropriately, the CD will be officially launched at an HFG gig at the Hastings restaurant, NUR, on May 6th this year.

This is the provisional CD cover artwork, as designed by Nelson. 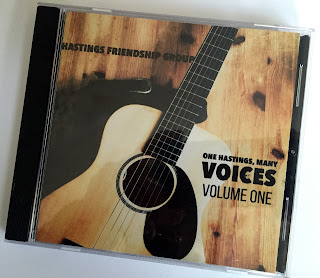 It is in tribute to the spirit that Jeremy represented, as well as to the man, that these musicians came together to record this, the first volume, in a planned series of HFG albums. A fundraising gig for Vol 1 was held at NUR in mid-February. In fact a few HFG gigs have already taken place to raise money to record the second, for which Sudanese charities, including ‘Children of Sudan’, will be the beneficiaries. An international cast of performers are planned for inclusion, including perhaps the renowned classical composer and pianist Polo Piatti. Polo movingly played at Jeremy’s memorial gig at St Mary in The Castle in Hastings last year. Let's hope that some Sudanese musicians will be on the Vol. 2 set list too.

Here’s to a lot more HFG albums and gigs, incorporating as wide a range of local musical artists as possible. You can keep up to date with progress on Vol. 1 via these links to the HFG, Trevor Webb or Nelson King Facebook pages.

Posted by Neil Partrick at 7:23 PM